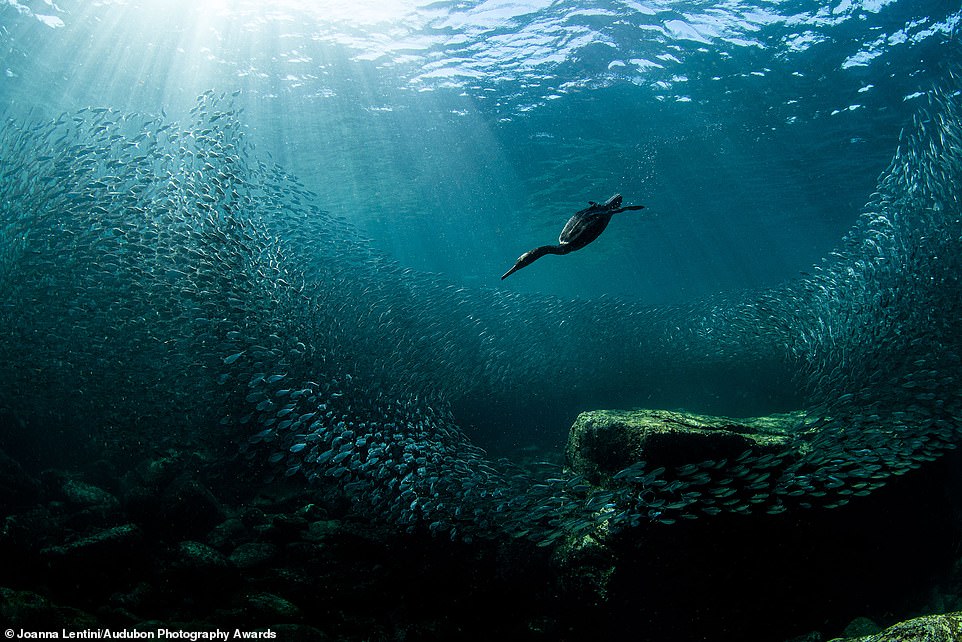 Awe-inspiring images from the 2020 Audubon Photography Awards show rare birds flying through the air, diving into water, feasting on fish and flowers, and fluffing their chests in the hopes of attracting a mate

By Andrew Court For Dailymail.com

The National Audubon Society has announced the winners and honorable mentions of its 2020 Photography Awards.

The annual competition invites professional and amateur photographers from across the U.S. and Canada to send in striking snaps of any bird species that they have captured throughout the past year.

Judges from the nonprofit – which is based out of New York City and focused on bird conservation – sifted through more than 6,000 entries to decide on the 10 incredible images below.

The photographs feature a range of rare birds – including the bare-throated tiger heron and the greater-sage grouse, which is currently under threat from widespread drilling and mining across the American Midwest.

Awe-inspiring images of more common birds – such as the  American Goldfinch and the Greater Roadrunner – also made the cut.

The photos will be published in upcoming issues of Audubon magazine, and will travel across the country in a special exhibit.

The winner of the Youth category has also been awarded a six-day trip to the Hog Island Audubon Camp in Maine to foster their passion for bird-watching to ensure that the practice continues for future generations.

This striking image of a double-crested cormorant is the 2020 Grand Prize Winner. The snap of the seabird was captured by Joanna Lentini in the waters of Los Islotes, Mexico. The double-crested cormorant frequently dives beneath the water to retrieve food, as is the case in the image above. The birds are able to reach a depth of 24 feet, and can stay beneath the surface for up to 70 seconds 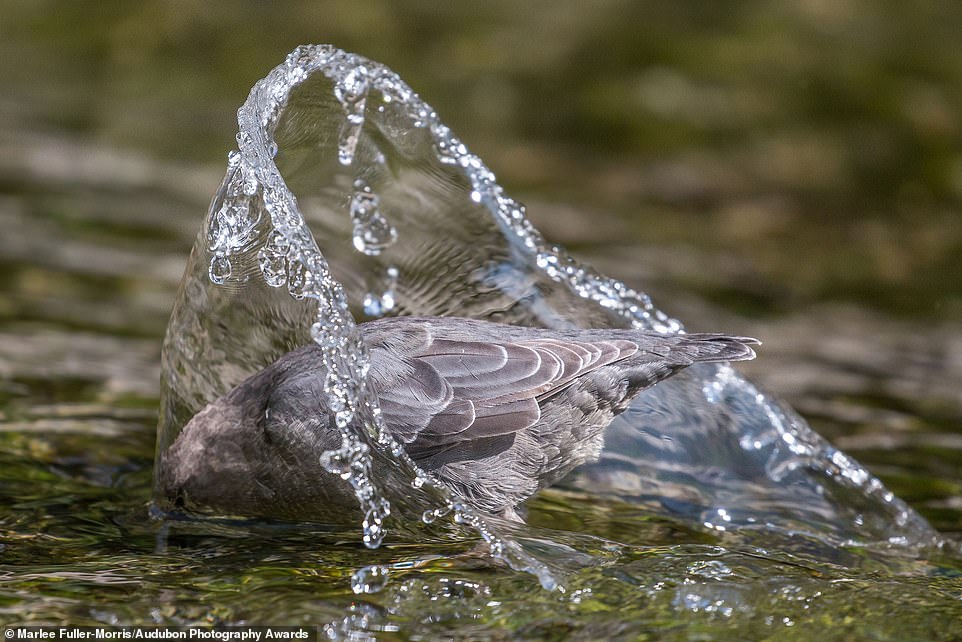 This year’s Fisher Prize was awarded to Marlee Fuller-Morris for her photo of an American Dipper. As its name suggests, the American Dipper bobs its head back and forth beneath the surface of fast-moving streams in order to retrieve food. The bird, which is also known as a water ouzel, inhabits the mountainous regions of Central America and the western half of North America. This image was captured in California’s Yosemite National Park 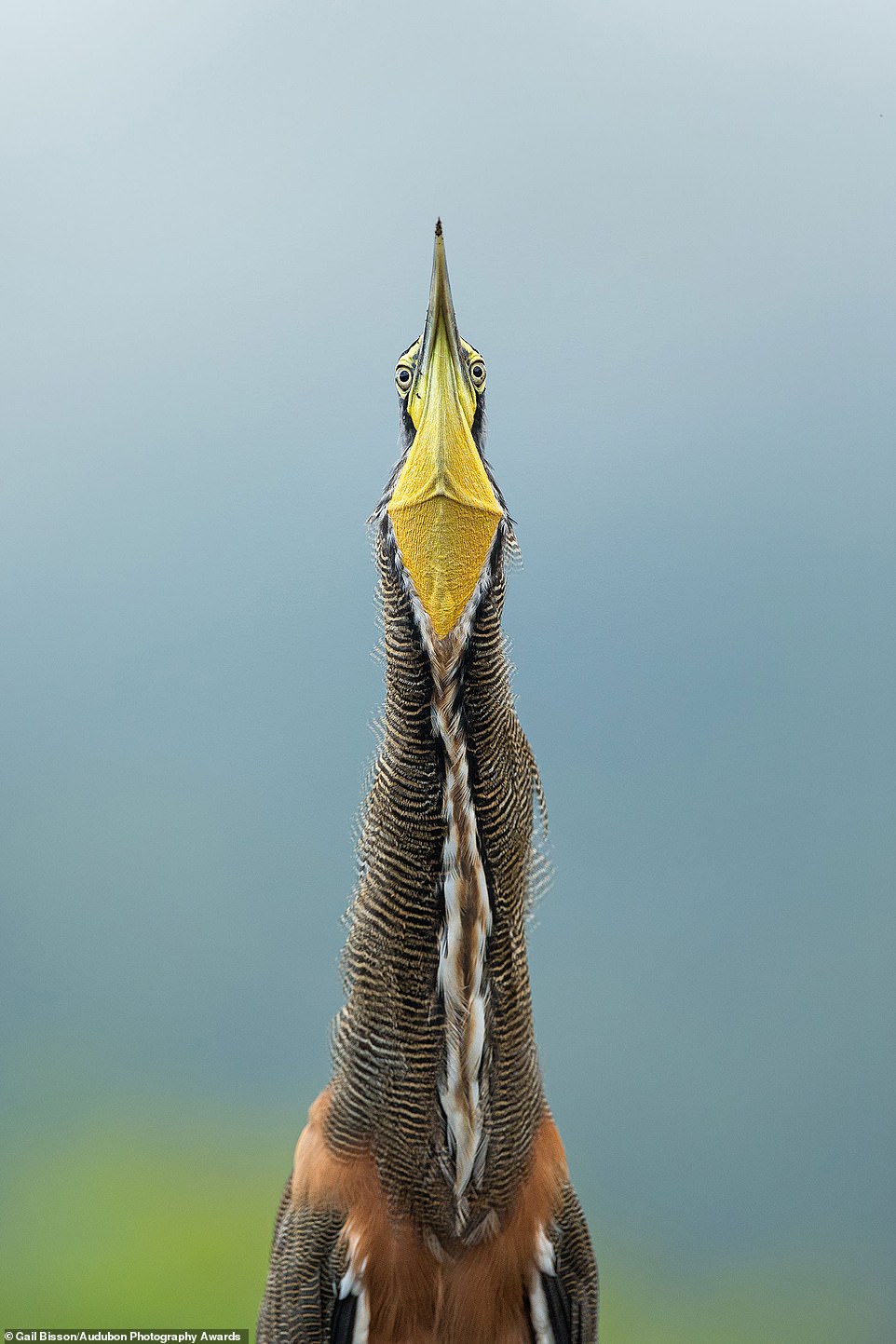 Gail Bisson was named the 2020 Amateur Winner for this image of a bare-throated tiger heron. While Bisson resides in Canada, she traveled south to Costa Rica to capture this snap of the rare bird, which can only be found in Central America. The bare-throated tiger heron is known for its distinctive yellow face and long feathered neck, and is typically feeds in topical swamp forests or coastal mangroves 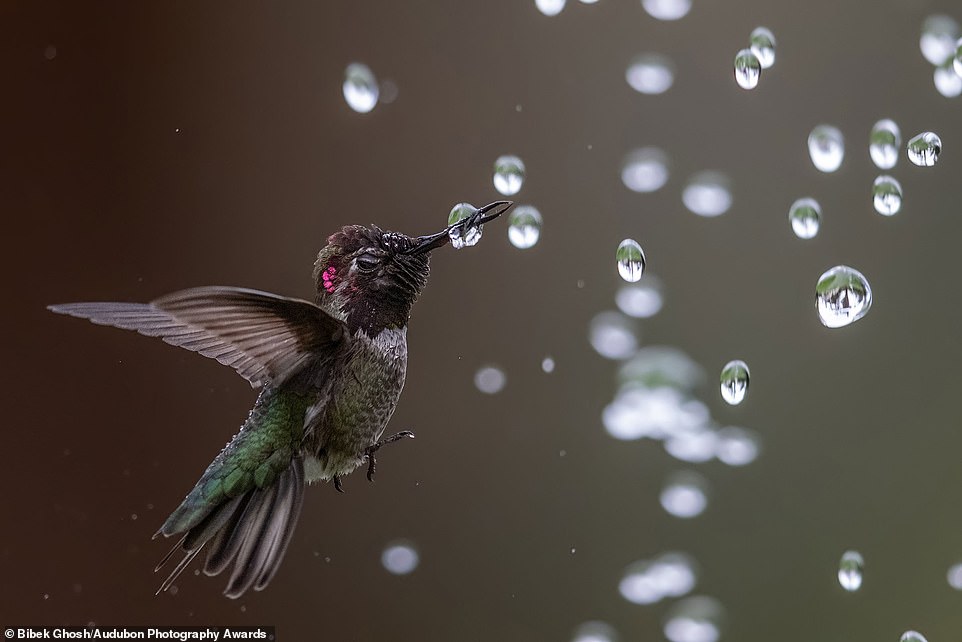 The 2020 Audubon Awards has given an Honorable Mention to amateur photographer Bibek Ghosh for this image of an Anna’s Hummingbird. The incredible image shows a droplet of water landing on the bird’s beak as it flies through the air. Anna’s Hummingbirds are native to the western coastal regions of North America 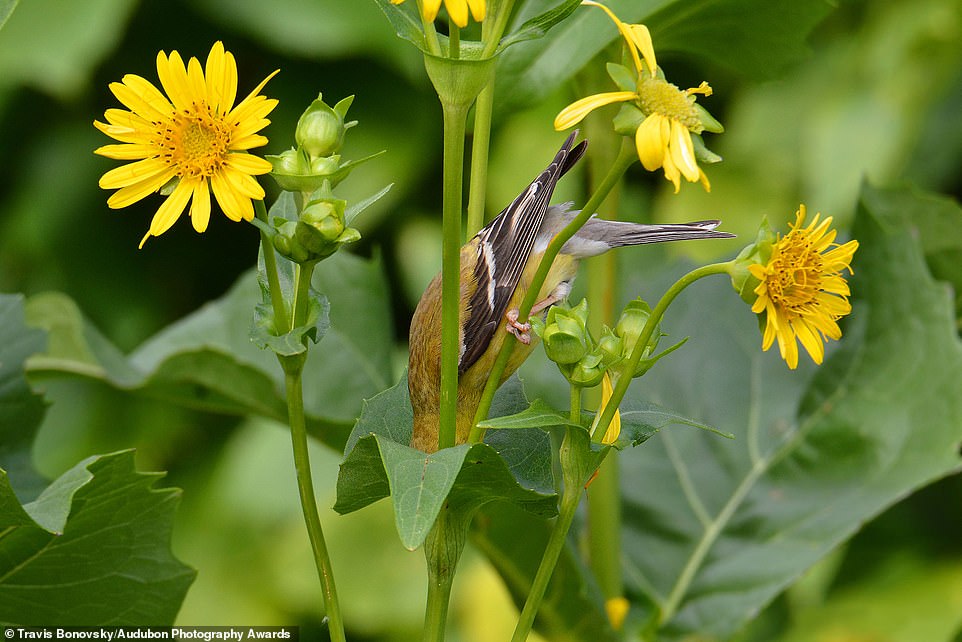 This year’s Plants for Birds winner went to Travis Bonovsky for this photograph of an American Goldfinch on a cup plant. The image was snapped last summer in Minneapolis, Minnesota.  Goldfinches primarily eat seeds, and are attracted to colorful flowers such as marigolds, poppies and sunflowers – as seen above 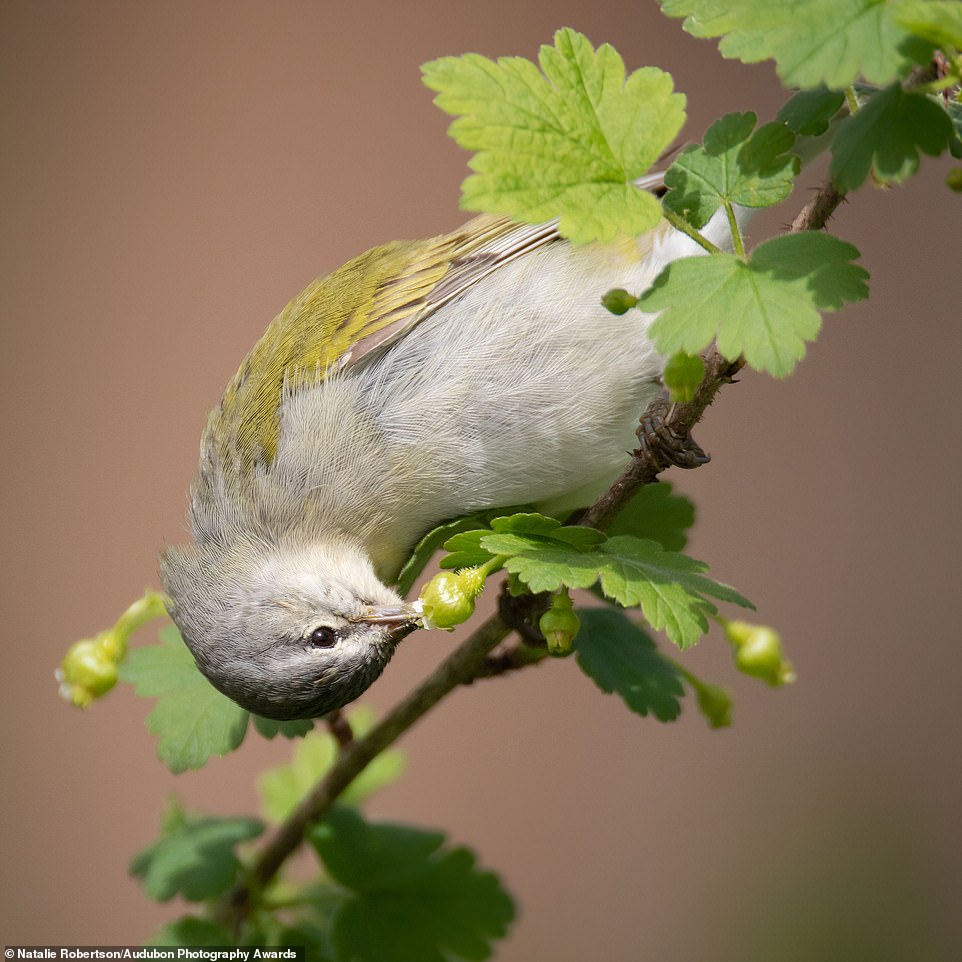 An Honorable Mention in the Plants for Birds category has gone to Natalie Robertson, who took this striking snap of a Tennessee Warbler on an eastern prickly gooseberry. Robertson is one of the few Canadians to be singled out for her photography skills, with this photo taken in Point Pelee National Park – located in one of the southernmost points of Canada 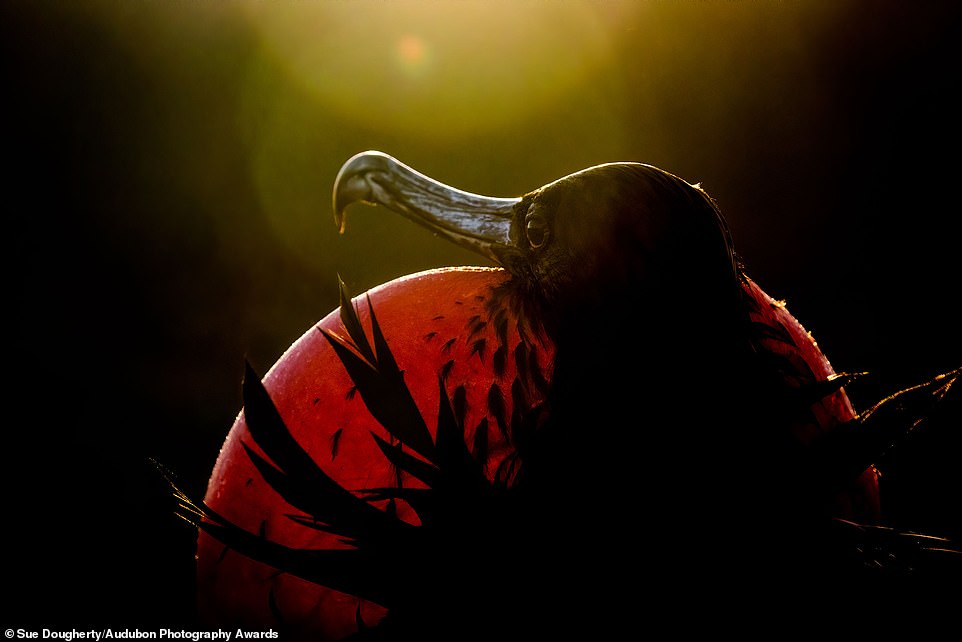 Judges for the 2020  Audubon Photography Awards have named Sue Dougherty this year’s Professional Winner. Dougherty – who travels far and wide to capture images of rare birds in their natural habitats – took this stunning shot of a Magnificent Frigatebird on Genovesa Island in Ecuador. The male Magnificent Frigatebird is known for its red gular sac, which is highlighted in Dougherty’s picture against a black backdrop. The bird inflates the sac in order to attract a mate 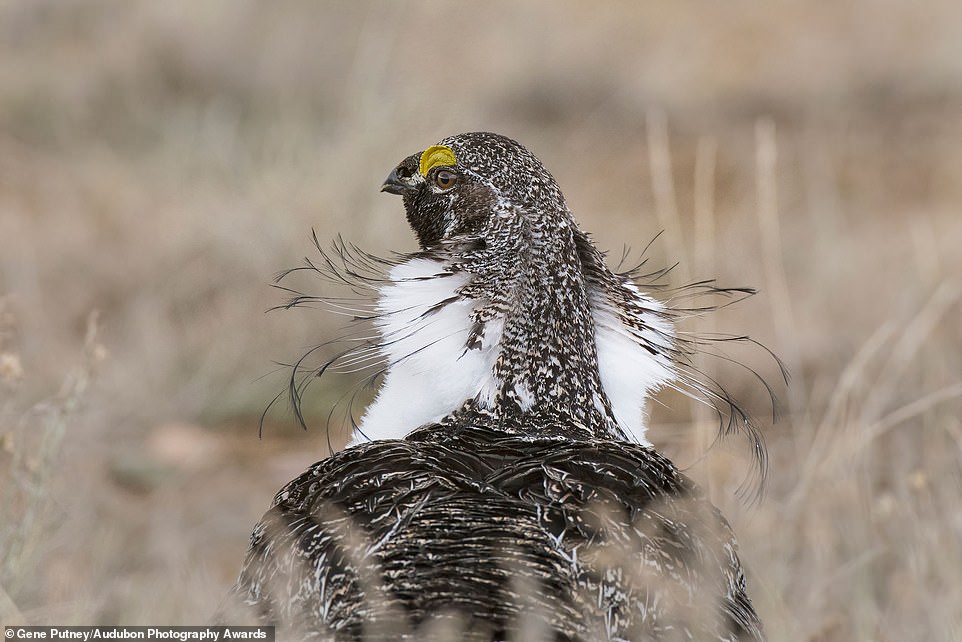 Professional photographer Gene Putney has been given an Honorable Mention for this image of the Greater Sage-Grouse, captured in Colorado. Numbers of Greater Sage-Grouse are in rapid decline, due to habitat loss. Several organizations have mounted legal battles to try and have to have the bird formally recognized as a threatened species. In 2018, the Trump administration announced a plan to roll back protections for the Greater Sage-Grouse as it opened nine million acres of land to drilling and mining 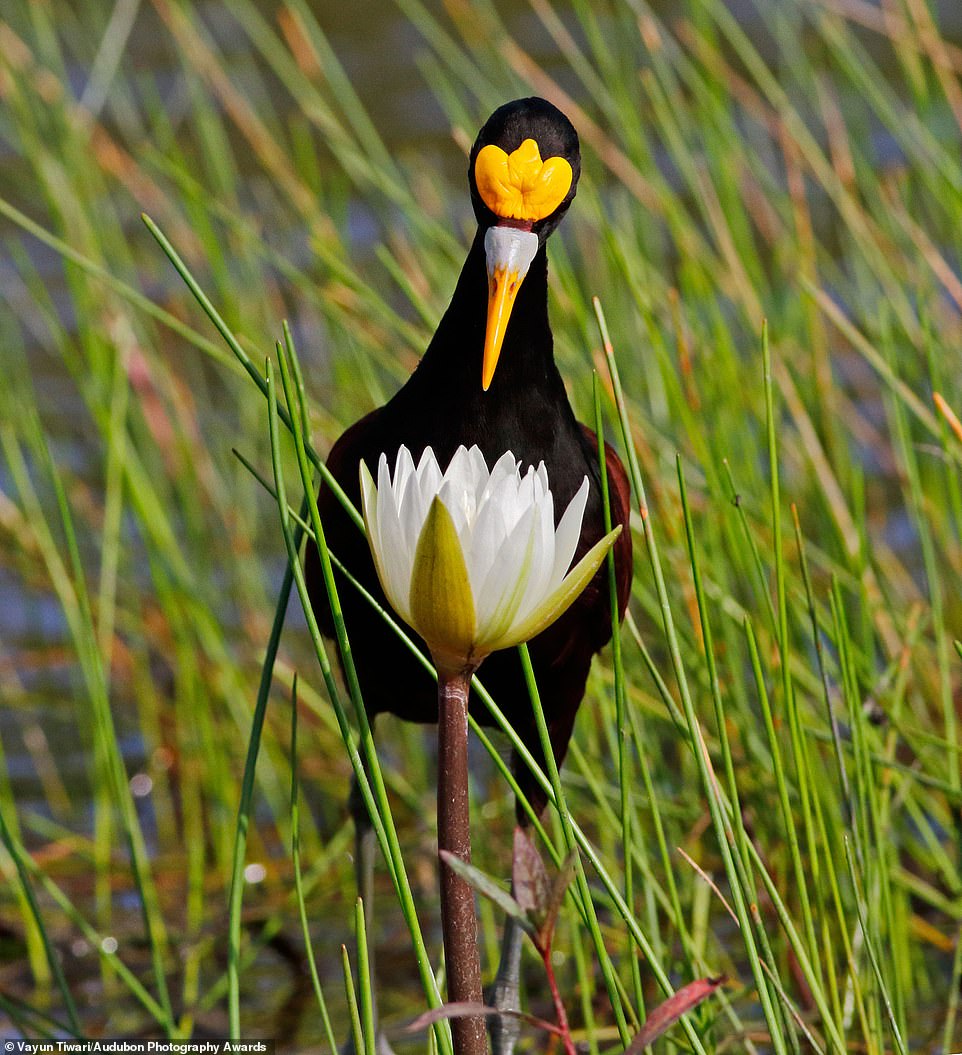 The National Audubon Society encourages millennials and members of Gen Z to take up bird watching and photography. The organization has set up a Youth Award, with Vayun Tiwari names as this year’s winner. The California native captured this amazing image of a Northern Jacana examining a flower in the marshes of the Orange Walk District in Belize 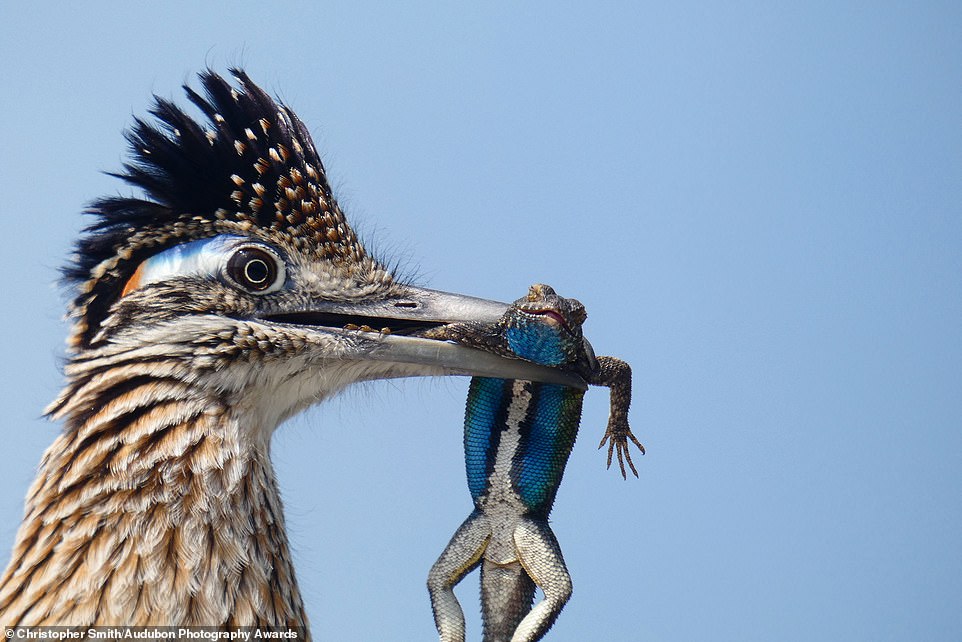 Up and coming photographer Christopher Smith garnered an Honorable Mention in the Youth category for this picture of a Greater Roadrunner with a lizard in its beak. The cuckoo bird – which is found in California – feeds on insects, scorpions, and tarantulas. Greater Roadrunners also trap snakes, mice and small squirrels in their mouths