Using a paper towel to dry your hands is ‘substantially’ more effective at removing viruses like coronavirus than a hand dryer, according to a new study.

Scientists from the University of Leeds investigated whether the way people dry their hands in a public toilet made a difference to the way COVID-19 is transmitted.

They found that paper towels were particularly effective at removing germs for people who don’t wash their hands properly after going to the bathroom.

In the study they found ten out of 11 surfaces touched by someone who used a hand dryer had significantly more contamination than from people using a paper towel.

Scientists say hand drying is important to minimise the spread of dangerous microbes including the novel coronavirus that has much of the world on lockdown.

The Leeds study found that failure to remove the virus from dirty hands increases transfer to other surfaces and leads to more opportunities for it to spread.

Dr Ines Moura, from the University of Leeds, said the results are relevant to the control of the virus that is ‘spreading at pace worldwide’.

WHAT ARE THE KEY FINDINGS?

Researchers placed a harmless virus on volunteers hands then had them wash their hands.

The volunteers then touched a range of surfaces after drying hands with a paper towel or hand dryer.

‘Paper towels should be the preferred way to dry hands after washing and so reduce the risk of virus contamination and spread.’

The research team say there has been a general trend towards using hand dryers, particularly in hospitals in recent years – removing paper towels from bathrooms.

In their research, four volunteers simulated contamination of their hands or gloved hands using a a virus that infects bacteria and is harmless to humans.

Their hands were not washed after contamination to simulate poorly or inadequately washed hands – something still seen despite multiple warnings and advice.

Hands were dried using either paper towels or a hand dryer and each volunteer wore an apron to measure the level of contamination to the body and clothes.

They dried their hands in a hospital public toilet and after leaving, samples were collected from public and ward areas.

This also included stethoscope tubing, stethoscope head and chest pieces and the aprons themselves.

Findings revealed both hand dryers and paper towel methods statistically significantly reduced virus contamination of hands over not drying hands at all.

But for ten out of 11 surfaces, significantly more environmental contamination was detected after using a hand dryer compared with paper towels.

All surfaces tested following the use of hand dryers showed phage contamination, a type of virus, compared with only six surfaces after paper towel use.

The average surface contamination following hand contact was more than ten times higher after drying hands with a hand dryer than with paper towels and viral dispersal to the apron and clothing was five times higher. 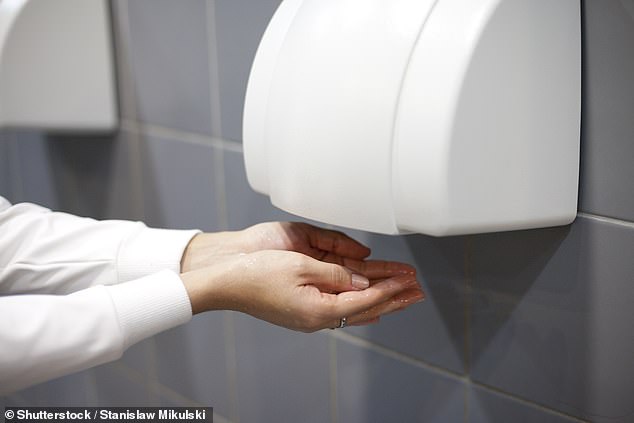 In the study they found ten out of 11 surfaces touched by someone who used a hand dryer had significantly more contamination than from people using a paper towel.

In the experiment, volunteers were also asked to fold their arms across their chest while using the apron before resting on the arms of a chair.

Results showed transfer from the apron to armchairs was detected only after using the hand dryer.

HOW TO WASH YOUR HANDS SAFELY

Washing your hands is one of the easiest ways to protect yourself and others from illnesses.

The NHS recommends washing them for about 20 seconds – or the time it takes to sing Happy Birthday twice.

These are the steps recommended by the health service:

Professor Mark Wilcox, from the University of Leeds, said: ‘There are clear differences, according to hand drying method, in the residual microbial contamination of the subject’s hands and body.

‘Crucially, these differences in contamination translate into significantly greater levels of microbe contamination after jet air drying versus paper towel use from hands and body beyond the toilet or washroom.

‘As public toilets are used by patients, visitors and staff, the hand drying method chosen has the potential to increase, using jet dryers, or reduce, using paper towels, pathogen transmission in hospital settings.’

In an unrelated study from the same publication, researchers from Germany found that paying with coins is a better option than paying with notes in terms of reducing the spread of bacteria and viruses such as coronavirus.

The study, by the University Medical Center Hamburg-Eddendorf, looked at the spread of bacteria on coins containing copper and bank notes over 24 hours.

They discovered that levels of bacteria drop by as much as 99 per cent on coins compared to euro bank notes.

Coin study author, Professor Johannes Knobloch said the risk of transmission of the virus through money, even banknotes, is still lower than face-to-face contact.

‘Regarding the current Covid-19 pandemic, if cash must be used for payment, coins would be better than notes.

‘However, card payment can be performed completely contactless and avoids the risk of carrying cash altogether.’

Findings for both studies were published in an abstracts book by the European Congress on Clinical Microbiology and Infectious Diseases (ECCMID).

Infected people can spread a contagion to others via direct or indirect exposure.

An outbreak will continue to expand if the average number of people infected by each carrier is greater than one.

Prohibiting group gatherings, closing borders, advising people keep 1.5 metres apart, and confining people to their homes has been shown to halt the spread of coronavirus.

In this method the public does not gain immunity in large numbers and the virus could re-surge dramatically if controls are lifted.

People who recover from COVID-19 develop antibodies and immunity.

As the virus spreads through the population and more people develop immunity there are less people the virus can infect.

If enough people have immunity the outbreak will die away.

It is estimated about 30 per cent of people who catch the virus will not show symptoms and for many more the symptoms will not be serious.

This method produces a spike in infections which can overwhelm the healthcare system resulting in large numbers of fatalities.

A COVID-19 vaccine would be the safest and most effective way of controlling the outbreak.

There are several vaccines currently in development though they need to be tested which can take many months.

If a vaccine is rushed without proper testing there may be side-effects and complications.