A Government scheme which will force all travellers arriving in the UK to spend 14 days in quarantine could be scrapped just weeks after it is launched as a Tory revolt grows.

Home Secretary Priti Patel has announced that from June 8 everyone coming to Britain must spend two weeks in self-isolation in order to prevent importing new cases of coronavirus.

But the tourism and aviation industries have warned the measures could scupper any hopes of economic recovery.

There is now a growing number of ministers and Conservative MPs who are demanding Ms Patel rethink the plans. 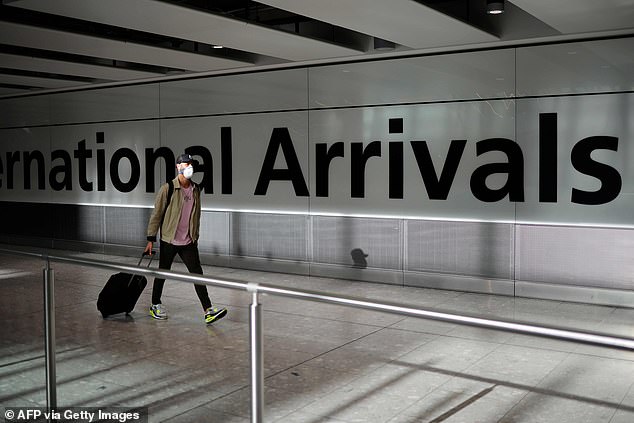 People coming to the UK will be told they have to self-isolate for 14 days. Pictured is a passenger at Heathrow Airport on May 22

From June 8, all travellers arriving in the UK – whether by air, land or sea – will have to fill in a form before being allowed into Britain. This will include British nationals coming home, as well as foreign visitors.

You will have to provide an address where you will be staying and self-isolate there for 14 days, with no visitors and no trips outside.

Officials will carry out spot checks at addresses to ensure that people comply and public health officials will also carry out random checks by phone.

How will it work?

Passengers will be able to complete a ‘contact locator form’ on the Government’s website up to 48 hours before departure.

There will be no paper versions of the form. Failing to complete it before travelling is a crime.

However, the scheme has been criticised because checks for the forms will only be done at random, meaning some people could slip through the net.

Will anyone be exempt?

Yes. Haulage workers, medics who are helping to fight the virus and some seasonal agricultural workers.

This applies to foreigners from all countries, except Ireland, in order to protect the Common Travel Area.

How long will these restrictions be in place?

Home Secretary Priti Patel described them as ‘temporary health restrictions’ but, in reality, they will be in force for as long as coronavirus remains a threat –possibly for many months.

However, there is a glimmer of hope for tourists wanting to go abroad in that the scheme will be reviewed every three weeks. So the restrictions could be lifted in time for the high season if the virus is kept under control.

Transport officials are also talking to other EU countries about the possibility of ‘air bridges’, which would allow the measures to be dropped for visitors returning from these places. Portugal, Spain and Greece have all expressed interest in creating these bridges at some point in the future.

Many now believe the scheme will launch as expected in just over a week’s time before then swiftly being ‘knocked on the head’ and replaced with a more nuanced approach at the end of June.

The restrictions, which include the threat of unlimited fines if people breach self-isolation, are due to be in place indefinitely but will be subject to a review every three weeks.

Some Tory MPs believe the mounting backlash over the quarantine strategy will mean the scheme will not survive beyond its first review, likely at the end of June.

Some ministers believe imposing quarantine on travellers returning to the UK from parts of the world with a smaller outbreak than Britain is illogical.

A cross-party group of 40 MPs, including former transport secretary Chris Grayling, has been set up to push for the measures to be relaxed.

The chairman of the group, Tory MP Henry Smith, told The Times he believed the quarantine plans will be ‘knocked on the head’ after the first review.

However, Whitehall sources told MailOnline that changes would only be made to the quarantine measures when the science on the spread of the disease allows it.

Optimism among MPs that the scheme could be rapidly rethought is shared by some in the tourism industry.

They believe the rules will be relaxed in July at the same time that the Government could move to ease restrictions to allow the reopening of hotels and other leisure facilities.

The period between April and September is key for the hospitality sector with one source saying the industry does now have ‘quite advanced plans to safely open in July’.

They added: ‘The danger is that if no one is allowed into the country without spending two weeks in quarantine it simply won’t be economically viable for them to do so.’

There remains a ban on all non-essential international travel and it remains unclear when this could be lifted.

The quarantine plans will make the return of summer holidays all but impossible for most people.

However, Health Secretary Matt Hancock yesterday suggested things could change in the near future as he hinted holidays abroad could return in July.

Pushed on whether it is out of the question for people to be hoping for a foreign holiday from July, he said: ‘I absolutely wouldn’t rule it out. We’ve got to proceed cautiously.

‘I definitely wouldn’t say no and I know how important it is for so many people.’