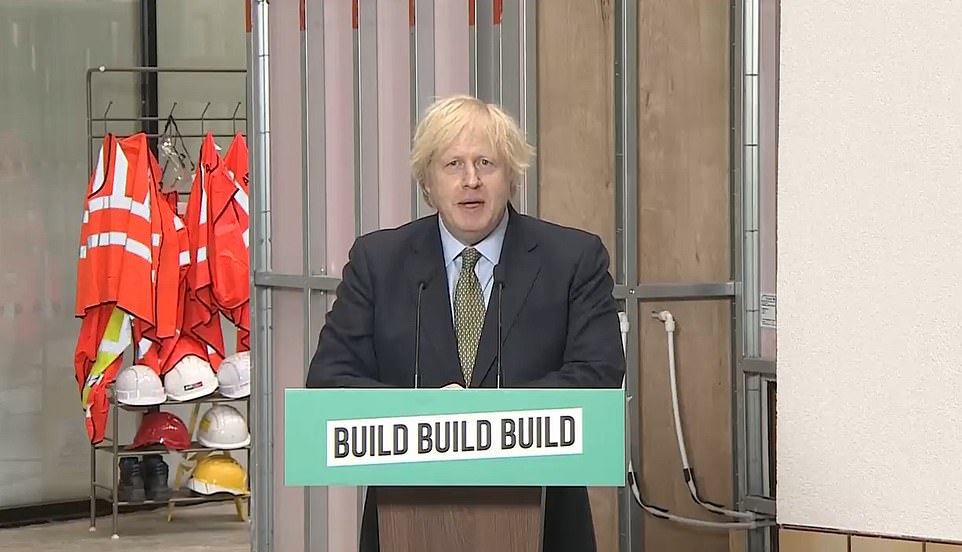 Boris Johnson today warned the UK must ‘work fast’ on a Roosevelt-style ‘New Deal’ to stop coronavirus plunging the country into a Great Depression.

In a rallying cry to the British people, the PM said he would turn on the spending taps and ‘build, build, build’ to kickstart the economy.

Defying mounting fears about spiralling government debt, he hailed a massive programme of public works, including £5billion upgrading key infrastructure such as schools, hospitals and roads, and confirming a £12billion scheme for affordable housing.

He said that is the way the UK can ‘not just bounce back, but bounce forward – stronger and better and more united than ever before’ in the wake of the coronavirus.

To facilitate the construction drive – modelled on massive scheme pushed through by Franklin Roosevelt in the US in the 1930s – the planning system is set to be radically overhauled, including making it easier to turn newly-vacant shops into homes.

Mr Johnson said he was determined to ‘change the country for the better’, admitting that ‘mistakes’ had been made in the response to coronavirus. In a hint at major overhaul to the civil service, the premier said some parts of government had been ‘so sluggish’.

He said the renewed lockdown in Leicester showed that the disease had not ‘gone away’, describing it as ‘circling like a shark in the water’.

‘We need to be able to move with levels of energy and speed that we have not needed for generations,’ he said.

The intervention, in a speech in Dudley, comes after official figures showed that the economy shrank by even more than thought in the three months before lockdown – with worse to come.

Some 9.3million jobs are now being propped up through the government’s furlough scheme, with costs already topping £25billion.

The continuing threat from the virus has also been underlined as fresh curbs are imposed on Leicester after cases surged in the city.

Among the projects unveiled by the PM today are:

Speaking in Dudley today, Boris Johnson said: ‘We need to be able to move with levels of energy and speed that we have not needed for generations.’ 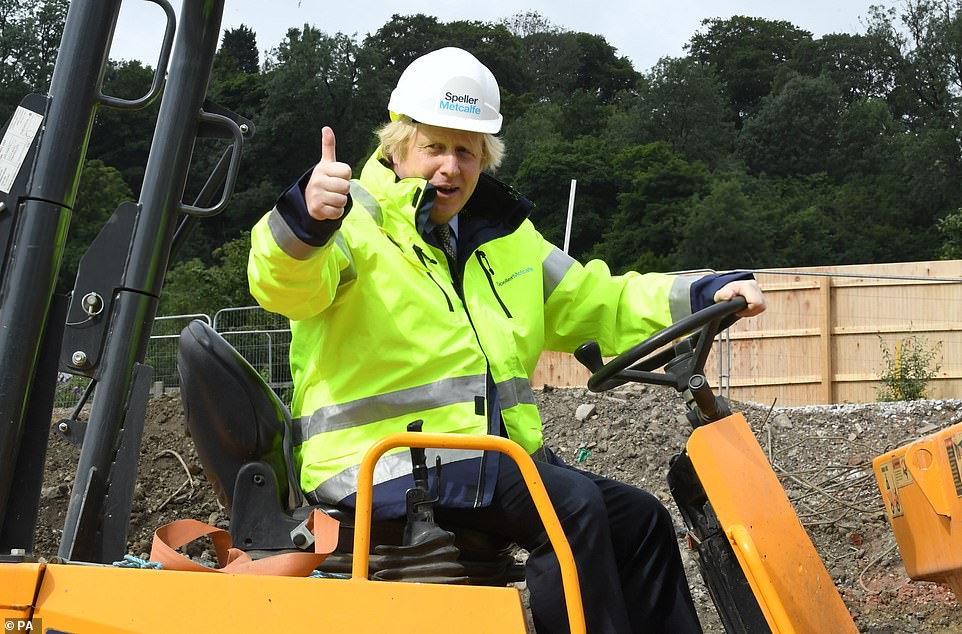 How does Boris Johnson’s ‘New Deal’ compare to FDR’s?

Boris Johnson today announced he is bringing forward £5billion in spending on investment projects to support jobs and boost the UK’s economic recovery in what the PM has described as his version of Franklin Delano Roosevelt’s famous ‘New Deal’.

So how does the PM’s version compare with FDR’s original which was launched by the US President following the Great Depression in the 1930s and was estimated to have cost at the time more than $40billion?

US: FDR set up the Public Works Administration which provided funding to build things like hospitals and schools as well as dams and airports. It spent an estimated $7billion over the course of its existence. The PWA is perhaps most famous for its spending on the Hoover Dam.

UK: £100million will be spent this year on 29 projects in the UK’s road network. That will range from bridge repairs in Sandwell to improving the A15 in the Humber region.

US: FDR set up the Works Progress Administration to put the unemployed back to work. Building new roads was one of the WPA’s main outlets, along with constructing public buildings, airports and parks. Some 650,000 miles of new roads were built under the initiative. The WPA spent an estimated $11billion.

US: Farmers were paid to leave fields fallow to prevent surpluses and protect prices. New laws were passed to pave the way for hydroelectric dams to be built along the huge Tennessee River.

Today’s speech is being accompanied by billions of pounds of investment in building and refurbishing schools, hospitals and roads, as well as new spending on transport and local growth projects.

A new unit, dubbed Project Speed, will be led by Chancellor Rishi Sunak this summer to identify projects that can be fast-tracked.

Reform of the planning system to remove ‘blockages’ is also under consideration. And a new National Infrastructure Strategy will be published in the autumn.

Mr Sunak will put the ‘infrastructure revolution’ at the heart of a mini-Budget expected on July 8.

In his speech in Dudley in the West Midlands today, the PM pledged to ‘build back better and stronger’, with a programme designed to reach all parts of the country.

‘Too many parts of this country have felt left behind, neglected, unloved, as though someone had taken a strategic decision that their fate did not matter as much as the metropolis,’ he will say.

‘If we deliver this plan together, then we will together build our way back to health.’

The PM offered an ‘opportunity guarantee’ to young people and those who have lost their jobs because of the lockdown, with major investment in apprenticeships and further education.

‘It may seem a bit premature to make a speech now about Britain after Covid when that deceptively nasty disease is still rampant in other countries and when global case numbers are growing fast.

‘And when many in this country are nervous, rightly, about more outbreaks – whether national or local – like the flareup in Leicester.

‘Where, as I promised, we are putting on the breaks, and I thank the people of Leicester for their forbearance.

‘And yet we cannot continue simply to be prisoners of this crisis. We are preparing now, slowly, cautiously, to come out of hibernation and I believe it is absolutely vital for us to set out the way ahead so that everyone can think and plan for the future: short, medium and long-term.

‘Because if the Covid crisis has taught us one thing: it’s that this country needs to be ready for what may be coming, and we need to be able to move with levels of energy and speed that we have not needed for generations.’

He said: ‘We must work fast because we have already seen the vertiginous drop in GDP and we know that people are worried about their jobs and their businesses and we are waiting as if between the flash of lightning and the thunderclap with our hearts in our mouths for the full economic reverberations to appear.

‘We must use this moment – now – this interval to plan our response and to fix of course the problems that were most brutally illuminated in that Covid lightning flash.’

Mr Johnson directly referenced the famous New Deal programmes led by Franklin D Roosevelt, which are widely credited with rescuing the United States from the Great Depression in the 1930s.

Yesterday he confirmed there would be not attempt to ‘go back to what people called austerity’, saying that would be a mistake.

He said today: ‘It sounds positively Rooseveltian, it sounds like a New Deal. All I can say is that if so, then that is how it is meant to sound and to be, because that is what the times demand.

‘This is a government that is wholly committed not just to defeating coronavirus but to using this crisis finally to tackle this country’s great unresolved challenges of the last three decades.

‘To build the homes, to fix the NHS, to tackle the skills crisis, to mend the indefensible gap in opportunity and productivity and connectivity between the regions of the UK.

Ministers will spend the summer trying to identify a much larger programme that can be fast-tracked.

This will include the first of 40 planned new hospitals, along with energy projects, road and rail schemes and flood defences. A commitment to plant 75,000 acres of trees each year by 2025 is being confirmed.

‘Roosevelt actually delivered and saved America from the Great Depression, I think the jury will be out on Boris Johnson for that.’

In a further bid to ‘build back greener’, some of the first new jobs to be created will be 3,000 in local conservation projects protecting wildlife habitats such as rivers and meadows, according to the Telegraph.

Privately, ministers acknowledge that the Government has made mistakes in its handling of the pandemic, particularly over testing and care homes.

But Downing Street believes it has the chance to rebuild public confidence by demonstrating it has a strategy for rebuilding the country afterwards.

The total capital investment figure is believed to be around £5bn, which suggests the package includes existing commitments that have been re-nosed as well as new cash, according to the Times.

How New Deal dragged the US out of Great Depression

The New Deal was a major public relief programme instigated by US president Franklin D Roosevelt in the wake of the Great Depression.

Some 12million Americans were thrown out of work in the years following the Wall Street Crash of 1929.

The newly-elected Democratic president embarked on his ground-breaking plans in 1933, including reform of banks, support for the elderly and the jobless, and the repeal of Prohibition. 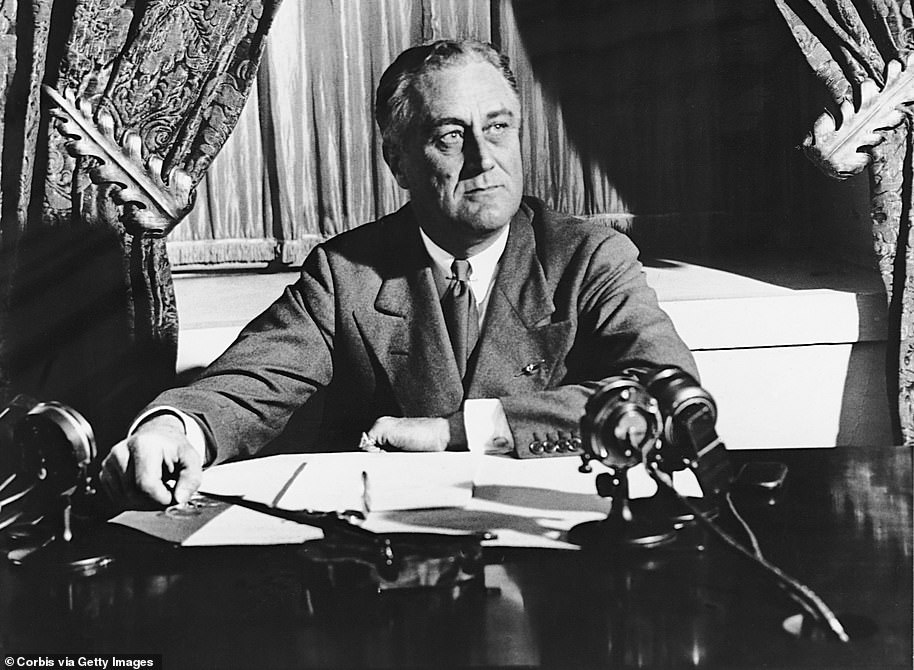 He spoke of the need for the state to help the ‘forgotten man’ at the bottom of the economic pyramid. A centrepiece of the proposals was a massive programme of public works to build up the American economy again.

It is this part of the New Deal to which Mr Johnson was referring when he said that his infrastructure plans were ‘positively Rooseveltian’.

In Mark Twain’s 1889 novel A Connecticut Yankee in King Arthur’s Court, the author called for a ‘new deal’ for exploited workers. Roosevelt had read the book and on accepting the presidential nomination in 1932, he said: ‘I pledge myself to a new deal for the American people. This is more than a political campaign. It is a call to arms.’

Roosevelt established the Works Progress Administration which employed millions of jobless to construct airports, hospitals, schools, post offices, dams, bridges and thousands of miles of roads. By the end of the 1930s America was on the road to recovery.