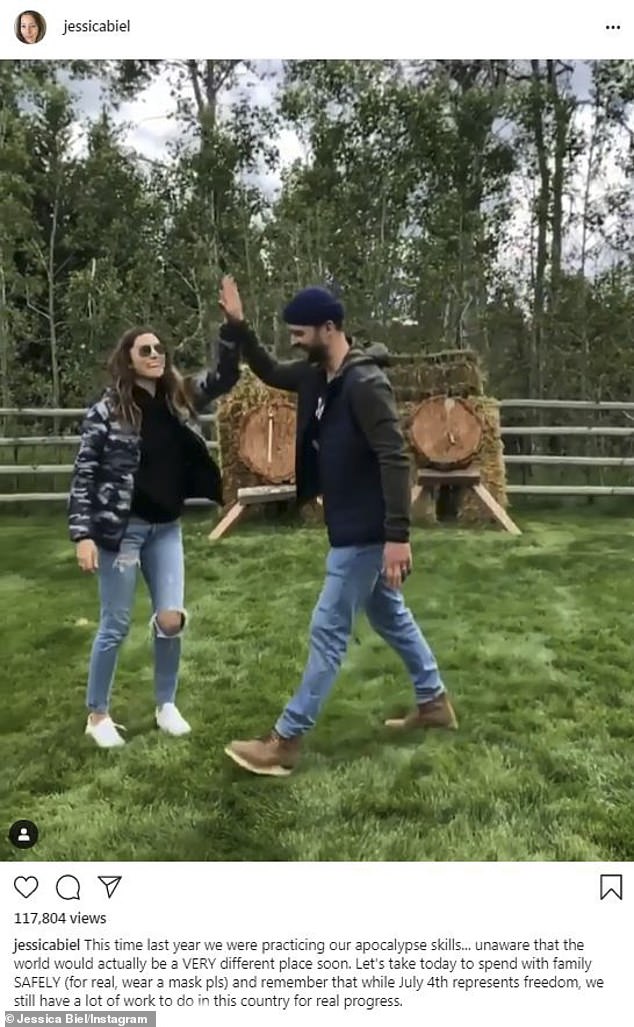 Justin Timberlake and Jessica Biel wished their fans a safe 4th of July on Saturday by showing off their impressive ax-throwing skills.

The 38-year-old actress posted a throwback video to Instagram of herself and her husband, 39, hurling axes.

Jessica wished her fans a safe Independence Day weekend in the caption while also vaguely referencing the protests that have swept the nation since the police killing of George Floyd in late May.

On target: Justin Timberlake, 39, and Jessica Biel, 38, wished their fans a safe 4th of July on Saturday by showing off their impressive ax-throwing skills

Jessica was dressed casually for cool temperatures in the throwback video with a black and gray camouflage jacket over a black sweater, distressed jeans and brilliant white sneakers.

Justin was dressed similarly low key with an olive jacket featuring a blue down front, as well as a black shirt, jeans and brown boots.

The video began at regular speed, before switching to slow motion as the axes twirled through the air.

The action sped up once the landed in the middle of the wooden targets, and Jessica and Justin celebrated with a high five. 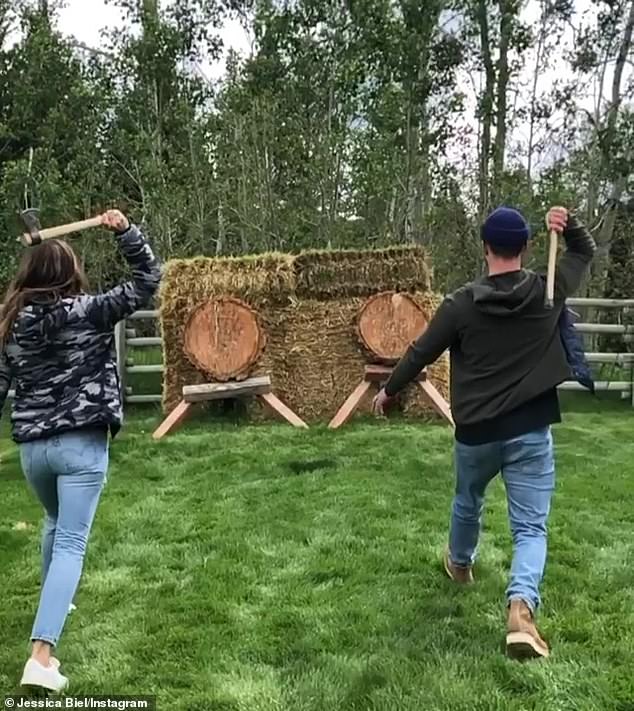 Low key: Jessica was dressed casually for cool temperatures in the throwback video with a black and gray camouflage jacket over a black sweater, distressed jeans and white sneakers 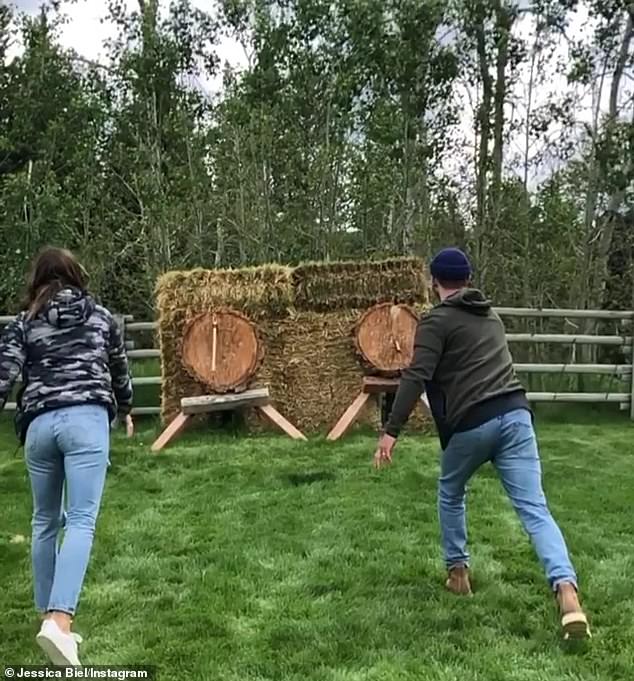 No fuss: Justin was dressed similarly low key with an olive jacket featuring a blue down front, as well as a black shirt, jeans and brown boots 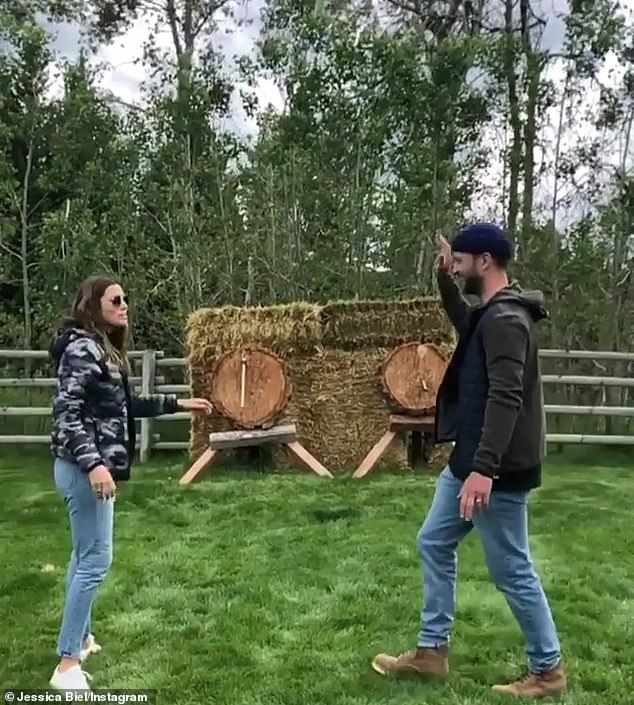 Balletic: The clip switched to slow motion to show the axes whirling through the air before striking the wooden targets

The Sinner star indicated that the video was shot back in 2019, though she was repurposing it for the patriotic holiday.

‘This time last year we were practicing our apocalypse skills… unaware that the world would actually be a VERY different place soon,’ she wrote.

Jessica also urged her 9 million Instagram followers to take the coronavirus pandemic seriously if they chose to celebrate publicly.

‘Let’s take today to spend with family SAFELY (for real, wear a mask pls) and remember that while July 4th represents freedom, we still have a lot of work to do in this country for real progress.’

Although the safest way to celebrate July 4 is to stay home, the CDC has urged those Americans who want to go out to remain ‘vigilant.’

People should wear masks at all times if they leave their homes and should stick to outdoor events, which are safer than indoor celebrations.

They’re also urged to steer clear of crowds and to find a spot where they can social distance from others. 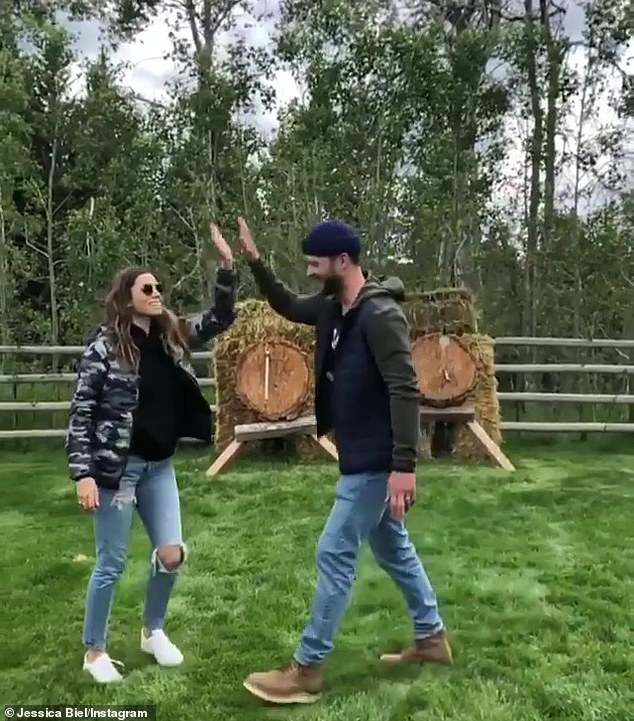 Back on time: The clip switched back to normal speed as Justin and Jessica celebrated with a high five

The couple have kept a relatively low profile on social media in recent months, though both have been posting about their country’s progress.

On June 25th, Justin shared a post about Breonna Taylor, a Black EMT who was shot eight times by police when they entered her home using an illegal no-knock warrant.

The police were searching for a suspect who didn’t even live with Taylor and who was already in police custody at the time of the raid that killed her.

The former NSYNC singer’s post urged that the officers who shot Taylor be arrested for her death. 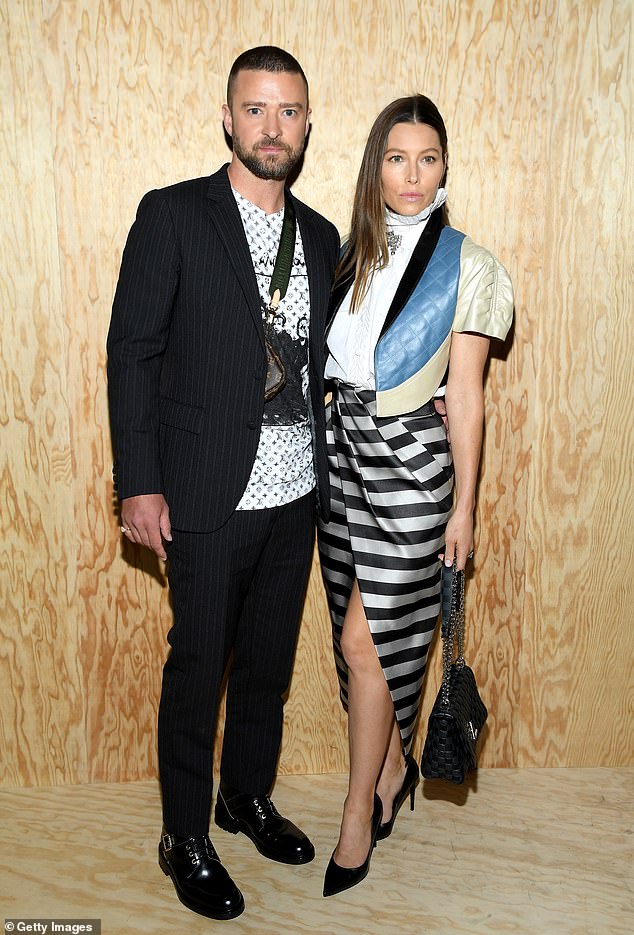 Safety first: Jessica’s post urged her followers to wear masks and take coronavirus precautions if they went out to celebrate Independence Day; pictured in October

He and Jessica have also shared multiple posts in support of the Black Lives Matter Movement and protests that cropped up following the police killing of George Floyd in Minneapolis.

‘Boys grow up to be fathers. I think about that a lot these days,’ he began his lengthy caption. 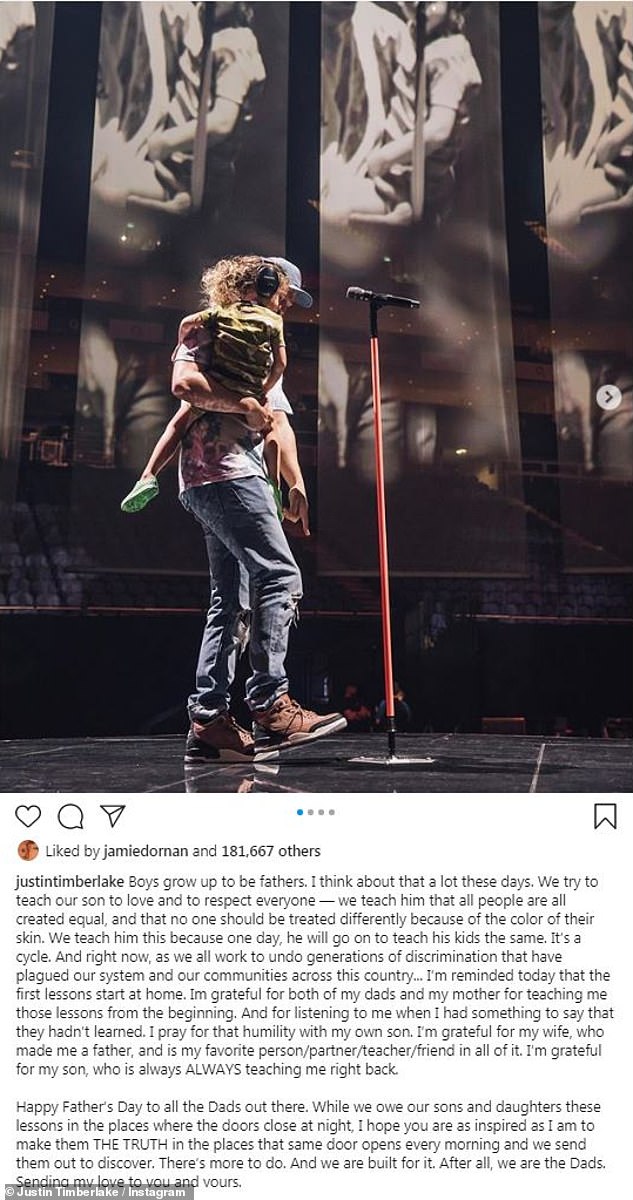 Paying it forward: Justin wrote on Father’s Day about how he and wife Jessica Biel try to teach their son Silas to love and to respect everyone, like his parents did for him

‘We try to teach our son to love and to respect everyone — we teach him that all people are all created equal, and that no one should be treated differently because of the color of their skin. We teach him this because one day, he will go on to teach his kids the same. It’s a cycle.’

He ended the post by celebrating all the fathers who teach their children the truth about the world around them.

He and Jessica have been married since 2012, and they welcomed Silas in 2015. 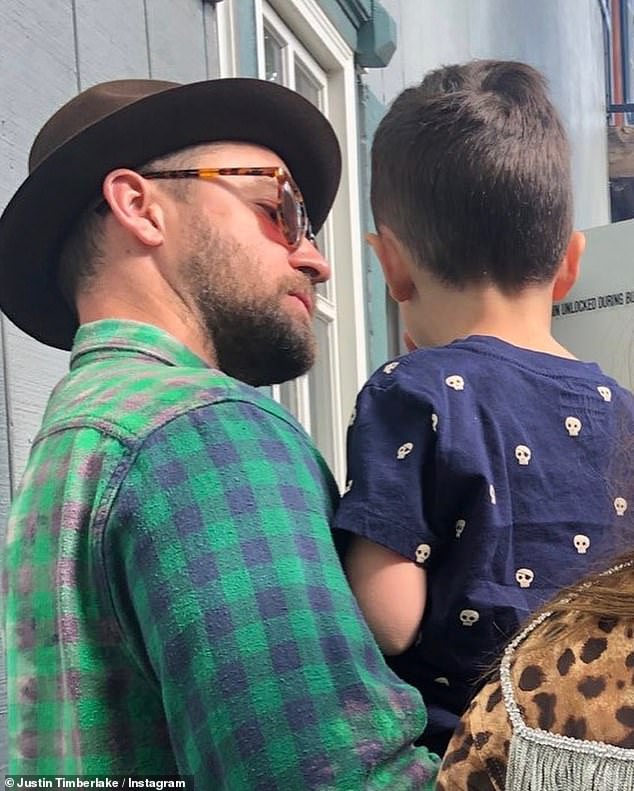 Doing the right thing: He celebrated all father’s who teach their children about racism and equality. The pop star has shared multiple social media posts inspired by Black Lives Matters protests