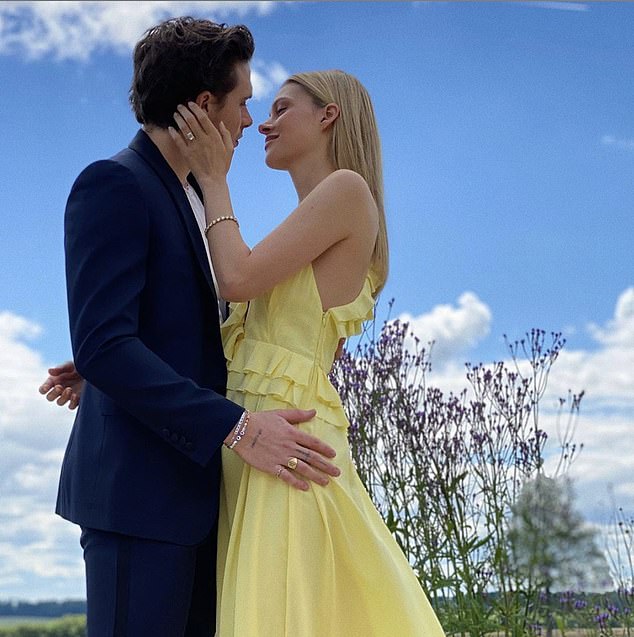 With congratulations from famous friends including socialite Paris Hilton and racing driver Lewis Hamilton, and a simply darling official engagement photo in which the bride-to-be wears one of her mother-in-law’s dresses, it’s clear that the betrothal of Brooklyn Beckham to Nicola Peltz is no low-key affair.

Brooklyn announced the news on Instagram where he wrote: ‘Two weeks ago I asked my soulmate to marry me and she said yes xx I am the luckiest man in the world. I promise to be the best husband and the best daddy one day. I love you baby xx.’

Mum Victoria shared the same picture and wrote: ‘The MOST exciting news!! We could not be happier. Wishing you so much love and a lifetime of happiness.’

The emerald-cut diamond engagement ring, which photographer Brooklyn gave his actress love two weeks ago, is thought to have cost £160,000.

With congratulations from famous friends including socialite Paris Hilton and racing driver Lewis Hamilton, and a simply darling official engagement photo (pictured) in which the bride-to-be wears one of her mother-in-law’s dresses, it’s clear that the betrothal of Brooklyn Beckham to Nicola Peltz is no low-key affair

The couple started dating last October, went public in January and moved in together in New York in March. They are said to be planning to splurge up to £4 million on two weddings next summer, one on each side of the Atlantic.

Brooklyn’s little sister, Harper, nine, will reportedly be ‘chief bridesmaid’, with brothers Romeo, 17, and Cruz, 15, acting as his ‘ushers’.

A source said: ‘David and Victoria are thrilled. They feel he has finally met a girl who is not after him for fame or money. It’s too early to set a date, but they’re aiming for the end of next summer or early autumn.’

Happily, Nicola’s father is a generous American billionaire with deep pockets. Nelson Peltz reportedly spent £800,000 on a Bar Mitzvah for his twin sons in 2016.

Meanwhile, former footballer David Beckham and his former Spice Girl wife Victoria are said to be ‘keen to contribute’ to the costs of the spectacle. As they are worth £370 million at the last count, they can certainly afford to.

So who is the young woman who is marrying into the Beckham clan after a blink-and-you-miss-it romance?

What is the truth about claims of her ‘mean girl’ behaviour? And how well does her father know Donald Trump and the late paedophile financier Jeffrey Epstein?

Nicola Peltz, at 25, is the youngest of eight siblings — six of whom are boys.

She tells interviewers she was a tomboy who dreamed of playing hockey for a living until she took a drama class when she was 12 and realised that her dreams lay elsewhere.

‘I think my dad thought I was going to be in the women’s league for ice hockey, but I fell in love with drama, and I asked my mom if I could get involved with it,’ she said.

One early screen appearance was a cameo in a Miley Cyrus pop video when she was 13. She is best known for her role as Mark Wahlberg’s daughter in Transformers: Age Of Extinction, although it would be fair to say the critics did not rate the movie. She has since appeared in the TV series Inhumans. 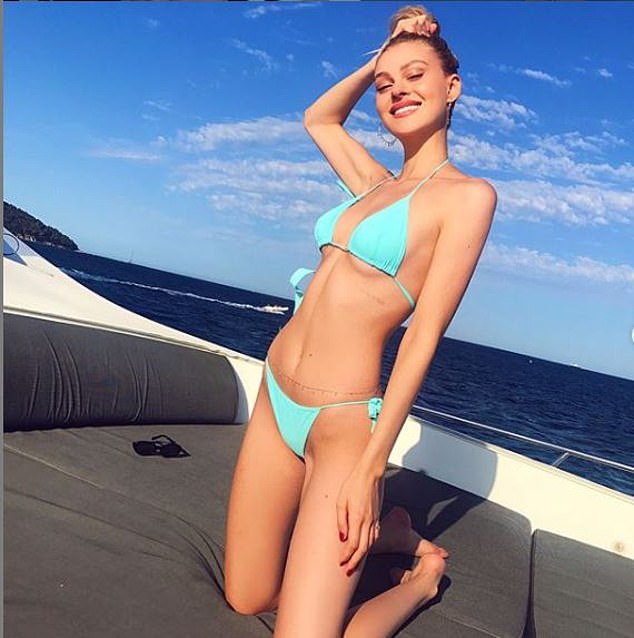 In 2016, she dated pop star Justin Bieber. Sources said that Bieber had a ‘crush’ on Nicola, then aged 19, and that they enjoyed spending time together.

The following year, she started dating Anwar Hadid, the brother of supermodels Gigi and Bella. They split ‘amicably’ after a year, but she unfollowed him and his entire family on Instagram after he was pictured kissing model Kendall Jenner.

It has been widely speculated that Nicola is the ‘Hollywood mean girl’ referred to by actress Bella Thorne in a 2015 interview.

Ms Thorne has said of the unnamed young woman: ‘She’s in the business, and she’s very, very mean. I stay away from her at all costs. I never say hello to her.

‘Her siblings are not mean like she is. It’s just her. One of the reasons I don’t like her is because she’s been a billionaire since she was very little, and she’s never had to work for anything in her life.’ Ms Peltz has never commented on the speculation.

Brooklyn Beckham was a star at his parents’ wedding in 2000 — stealing the show in a little purple cowboy outfit.

As a young man, he spent six years at the Curtis School on Mulholland Drive, Los Angeles, while Daddy was playing for LA Galaxy, before returning to the UK in time for his GCSEs. He then studied photography at a private London sixth form, also attended by Madonna’s boy Rocco Ritchie, before attending the prestigious Parsons School in New York.

However, he returned to the UK in 2018 after a year of the four-year course amid talk of being ‘homesick’ and eventually took up an internship with the photographer Rankin. 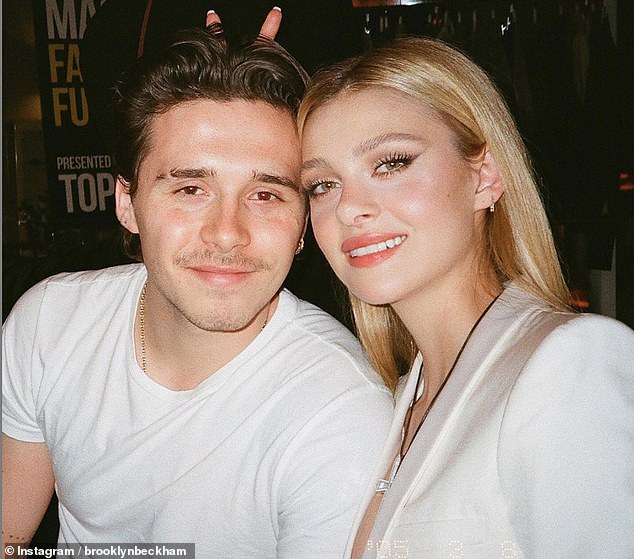 He gave up this job earlier in the year in order to move to New York with Ms Peltz. In the meantime, he has been shooting for magazines including Icon

Reports at the time suggested that he had a lot to learn. A source said: ‘Everyone knew Brooklyn’s work needed fine tuning, but no one knew his knowledge of the simplest tasks was so off.

‘Everyone had high hopes for him, but it’s not been the most impressive start. He’s lacking in most areas. But he’s trying to make up for it in enthusiasm.’

He gave up this job earlier in the year in order to move to New York with Ms Peltz. In the meantime, he has been shooting for magazines including Icon, which ran a picture of him on the cover in March. He shot a social media campaign for Burberry fragrance.

There was much scoffing over his book, What I See, a series of snapshots of his life, in particular an image of an elephant which he explained was, ‘so hard to photograph’.

Brooklyn is a big star on Instagram where he has 12.2 million followers and shares pictures of friends and family including Christmas lunch with Gordon Ramsay and his day at Sir Elton John’s wedding. (Sir Elton is his godfather.)

Brooklyn was once keen on following in his father into football, but was dropped by Arsenal when he was 15.

POSH IS HER BIGGEST FAN

The couple started dating in October 2019, and are thought to have been introduced by mutual friend Sofia Richie, the model daughter of singer Lionel.

They made their public debut with a date in LA in January and went to Paris Fashion Week together this spring where Brooklyn called her ‘the love of my life’. 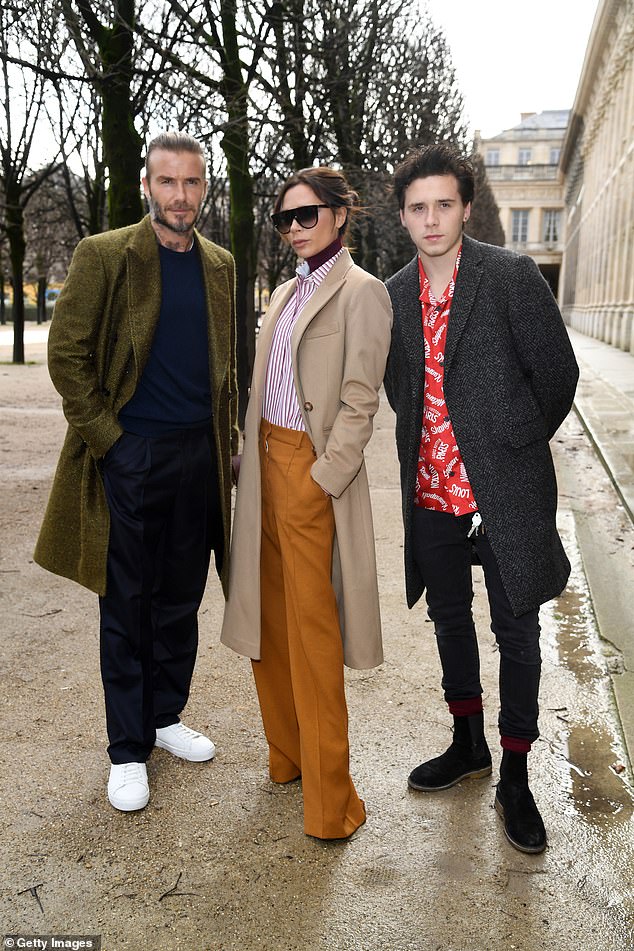 At the £115,000 party in the Cotswolds this March to celebrate Brooklyn’s 21st birthday, Nicola was filmed grooving to Gloria Gaynor’s hit I Will Survive with Victoria Beckham.

Apparently, Posh is her biggest fan and credits her with ‘calming down’ Brooklyn. She and David had feared that their young man was getting a reputation as ‘the next Calum Best’ because of his prolific womanising. Victoria is said to think that Nicola has ‘been the making’ of her son.

Billionaire investor Nelson Peltz is worth £1.3 billion, comfortably dwarfing David and Victoria’s £370m fortune. He has two jets, while the Beckhams have none.

He is a self-made man with a fearsome reputation as a tough-minded corporate raider.

He dropped out of the University of Pennsylvania’s Wharton School in 1962 and instead built his family’s tiny frozen-food business in Brooklyn into the largest frozen food distributor in the north east.

From there, he assembled the biggest packaging company in the world, Triangle Industries, which was sold in 1989 netting him around $840 million. 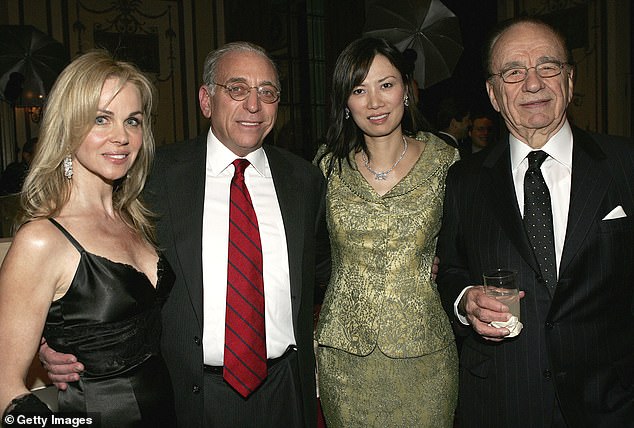 One of his closest friends is golfer and sports entrepreneur Greg Norman, who calls Peltz ‘a mental marathon runner’ and adds: ‘Nelson isn’t a Harvard type. He’s street smart. He understands what the masses want.’

Peltz is a long-term supporter of Donald Trump — they have been neighbours for decades in Florida. He recently held a £470,000-per-couple fundraiser for Trump.

Peltz said earlier this year: ‘His policies, to me, are the right policies for America. We have exported tens of millions of jobs — of manufacturing jobs over the last 40, 50 years, pick whatever time frame you want.

His phone number is said to be among the thousands in Jeffrey Epstein’s ‘black book’. He was in a consortium of investors with Epstein who were looking to buy New York Magazine in 2003.

Peltz and his wife have a reputation for firing staff on a whim. In 2016, the couple were sued by their dog walker and chauffeur Juan Gonzalez who said that he was fired after taking a day off sick. The case was settled.

THE POWER-WIFE MOTHER OF EIGHT

Petite blonde Claudia Peltz is Nelson’s third wife and the mother of eight of his ten children. They were married in 1985. Known for her diamonds and philanthropy, this power wife will certainly give Posh a run for her money in the glamour stakes.

Peltz’s first wife, Cynthia Abrams, was still a student when they were married in 1964 — ten years before Victoria Beckham was born.

The Beckhams have a £30 million house in Holland Park, West London, and their £6 million farmhouse in the Cotswolds. Both look seriously unimpressive compared with the Peltz family residences.

In Bedford, New York, is High Winds, a mega mansion on 130 acres. It used to belong to DeWitt Wallace of Readers Digest fame. Features include a flock of albino peacocks which roam the grounds, a huge lake and waterfall and an indoor ice hockey rink.

Nelson Peltz is a fan of Impressionist art and is said to have a mind-boggling collection of works by Renoir, Cezanne and Degas. 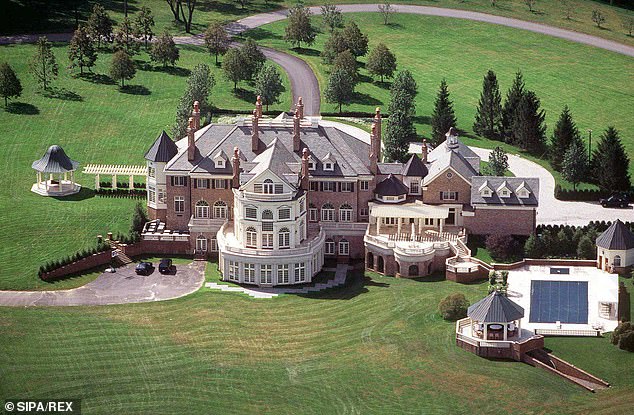 In Bedford, New York, is High Winds, a mega mansion on 130 acres. It used to belong to DeWitt Wallace of Readers Digest fame

He used to commute into work in New York City by helicopter but the neighbours complained, and after a protracted lawsuit he gave up the habit.

The family also has a vast French Regency-style home in Palm Beach, Florida. The home has a foundation lined with lead to keep out damp from the ocean.

He bought the house across the street to build a tennis court and was then told he had to have a house in order to build a court — so he built a mansion for guests.

GATHERING OF THE CLANS

The Beckham brood comprises Brooklyn, Romeo, Cruz and Harper. But the Peltz clan is far bigger. Nelson Peltz’s ten children range in ages from 54 to 17.

He has eight with his third wife, Claudia, a former fashion model, and said in a rare interview that they are all sports mad. ‘My kids are exhausted every day, and I keep them that way. It’s gym, ice, homework. They’re too tired to get in trouble.’

He added: ‘I don’t want them to see me walking off with a bag of golf clubs over my shoulder. If they see me work hard, it’s better than a lecture.’

Nicola said in an interview that her six brothers were ‘ridiculously protective’ of her growing up. ‘Some brothers more than the others, but I go to them for advice. I’ll always be the baby in the family.

‘I’m the youngest sister, but growing up with so many boys, it makes you tough.’

One brother, Will, is also an actor and another, Brad, is a professional hockey player with the Ottawa Senators.