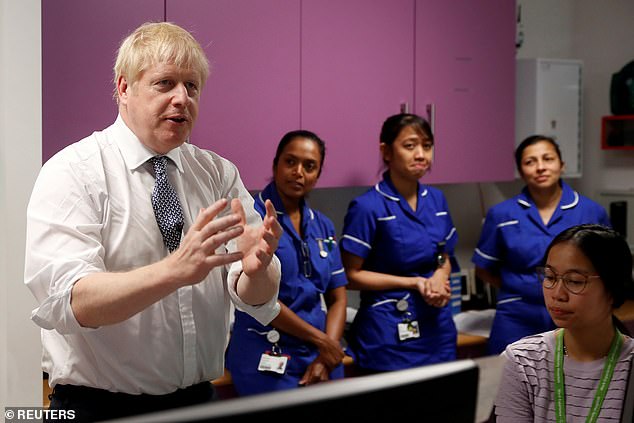 Of all the memorable speeches delivered by Winston Churchill, none was more influential than his 1946 address at Westminster College in Fulton, Missouri.

Although Churchill was no longer Prime Minister by then, the speech threw out phrases that would echo down the years.

Describing a new post-war division of the world between East and West, he invoked ‘the sinews of peace’, made the first reference to a ‘special relationship’ between Britain and America, and issued a dark warning that ‘from Stettin in the Baltic to Trieste in the Adriatic, an iron curtain has descended across the continent [of Europe]’.

Fulton was a turning point, convincing war-weary Western leaders that the Soviet Union could not be trusted, despite its role in defeating Hitler.

Appeasing China has not worked. And that is why today, just as Churchill stood up to Stalin in 1946, Boris Johnson should take a stand and urge the West to face down President Xi Jinping’s cynical aggression, writes Tobias Ellwood

President Truman, who was sitting in the audience, would recalibrate his view of Joseph Stalin and adopt a policy of preventing the spread of Communism around the world.

It was in the wake of Fulton that the North Atlantic Treaty Organisation, Nato, was created, ensuring that the West had the military strength to defend its values.

How the Cold War might have unfolded had Churchill’s words gone unheeded, it is hard to imagine.

Today, more than 70 years on, the parallels are dangerously clear. A new superpower is on the march and Western democracies are once again failing to understand the threat.

We have indulged China as it embarked upon its extraordinary ascent, attempting to deepen our engagement instead of subjecting Beijing to proper scrutiny.

For the past 40 years, we have somehow persuaded ourselves that an authoritarian Communist state would evolve into a global citizen embracing liberty and open trade. Today we must face the harsh reality that we’ve been duped.

Any notion that China can be trusted must surely have been dispelled following its initial – and disastrous – attempts to conceal the Covid-19 pandemic.

If it transpires that the virus began its spread as a result of negligence in a Wuhan laboratory, it can only strengthen calls to temper China’s reach and influence.

For despite endless promises of transparency and reform, China has shunned international accountability. It seeks superpower status but repudiates freedom, democracy and the rule of law.

Appeasing China has not worked. And that is why today, just as Churchill stood up to Stalin in 1946, Boris Johnson should take a stand and urge the West to face down President Xi Jinping’s cynical aggression.

If there are parallels between the former Soviet Union and the new China, it is important to recognise the differences, too.

For a start, China is infinitely richer than the USSR ever was. It is also more subtle and long-term in its strategy than anything dreamt up by Stalin or Khrushchev. 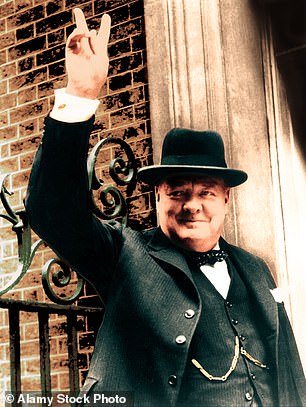 Of all the memorable speeches delivered by Winston Churchill, none was more influential than his 1946 address at Westminster College in Fulton, Missouri

Xi is well versed in the Art of War by the Chinese philosopher Sun Tzu, who concluded that the supreme skill is ‘to subdue the enemy without fighting’.

And to do this, China has adopted a three-pronged approach of a mighty economy, state-sponsored technology and military strength. Beijing already controls vast areas of global trade and development.

A dozen or more states, including Pakistan, Venezuela and Ethiopia, are now locked into large-scale infrastructure projects which they can ill afford.

Having signed up to so-called ‘One Belt One Road’ initiatives, they find themselves economically dependent on the Chinese Communist Party, a process known as ‘debt trap diplomacy’.

Today, China owns more global debt than any other country and we can expect growing pressure to recognise the Chinese renminbi as an alternative to the US dollar as the key international currency.

China’s gains influence in more advanced states through the purchase of companies, particularly in the property, utility, finance and retail sectors.

Household names such as Weetabix, Superdrug, Hoover, Motorola and MG are now run from Beijing, Shanghai or Guangzhou.

China’s colossal state funding of its own tech companies allows them to offer products and services at discount prices, becoming global giants in the process.

With artificial intelligence and 5G telecommunications transforming world economies, we can be sure that whoever controls the data also wields the power to monitor, steal or interfere.

China already owns about a quarter of the world’s data and will control even more as international companies are encouraged to migrate away from America’s Global Positioning System (GPS) to China’s BeiDou system of satellite communications. 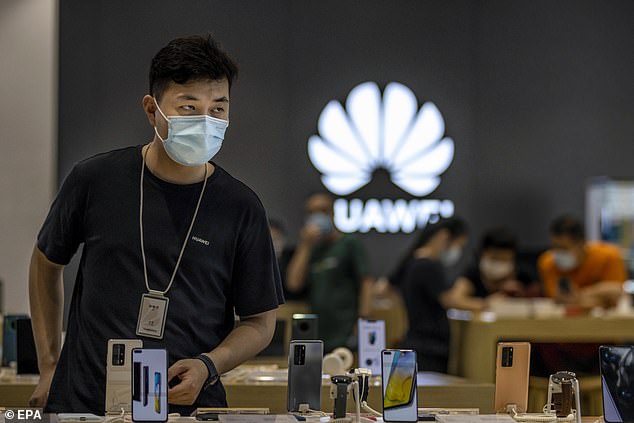 With artificial intelligence and 5G telecommunications transforming world economies, we can be sure that whoever controls the data also wields the power to monitor, steal or interfere. Pictured: A man wearing a mask for protection, stands in the Huawei shop in Shanghai, China, on Monday

No wonder the US wants Huawei out of the UK.

When it does decide to show its fangs, Beijing will do so without hesitation, as the persecuted Uighurs and residents of Hong Kong and Tibet know all too well.

China boasts the biggest land army in the world. Its huge navy dominates ever more of the South China Sea, turning disputed islands into military fortresses which intimidate international shipping.

Next, Beijing will claim the skies, too, and Taiwan – which it hints it will invade – will be completely isolated. Nuclear missiles are already in Xi’s armoury.

China’s trump card, though, must surely be the power it wields over the international bodies that are supposed to hold it to account.

The United Nations Security Council is paralysed thanks to the vetoes of China and Russia. Beijing held the rotating council presidency in April and failed to hold a single public meeting on Covid-19, even as the virus rampaged around the globe.

More from Tobias Ellwood For The Mail On Sunday…

By increasing donations and patiently promoting its officials in the administrative ranks of international organisations, China has acquired new diplomatic strength, challenging global norms and fending off censure.

Beijing even wields influence in a supposedly sceptical country such as ours. Last week, The Mail on Sunday revealed how The 48 Group of powerful pro-Chinese lobbyists stands accused of grooming Britain’s elites.

We have allowed China to make huge investments in our most vital infrastructure and even tolerate attempts to control free speech among Chinese students in our own universities.

The West, including Britain, must accept responsibility for where we are today. China has long recognised our weaknesses and divisions and Covid-19 has now exposed just how frail our world order has become.

We must not forget that Britain remains influential across the globe, even if the US, our closest ally, needs reminding of the unwritten duties that accompany its status as a responsible superpower.

How Britain conducts itself over the next few weeks will have long-term implications.

And that’s why, today, I urge the PM to step forward and emulate Churchill’s Iron Curtain speech. It would show bold leadership, extreme courage, even. It would define his legacy.

Yes, there would be consequences and economic repercussions. China would retaliate. But its heavy reliance on global trade means Beijing has an Achilles heel.

China needs wealthy Western nations to buy its exports and that gives us the leverage to push back. 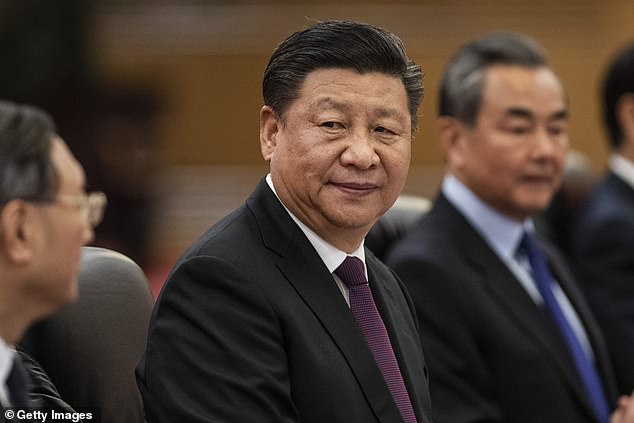 We have allowed China to make huge investments in our most vital infrastructure and even tolerate attempts to control free speech among Chinese students in our own universities. Pictured: China’s President Xi Jinping

We must reinvigorate our sense of what the West stands for in a newly divided world. It is time to reunite and lead our allies. For, if power continues to shift unchecked from West to East, a new Cold War is imminent.

Our Government must give this urgent mission a higher priority. The vital defence, security and foreign policy review – a major stock check of Britain’s capabilities, alliances, threats and ambitions – has been delayed.

Yet we race ahead with fresh political upheaval, rearranging the Whitehall personalities and architecture.

A global revolution is already under way – and it is potentially more dangerous than the one exposed by Churchill in 1946.

The way of life we take for granted is under real threat from a new world order.

Yet the most powerful strategic thinker in Government, Dominic Cummings, remains a domestic revolutionary with little appetite for the international scene.

I hope that his forthcoming tour of the UK’s most classified national security sites, and the influence of the new National Security Adviser, David Frost, will help persuade him that Britain can play a much more significant international role than at present.

The great Foreign Secretaries Anthony Eden and Ernest Bevin turned Churchill’s Missouri speech into real action. It is time for their successors in the Foreign Office to step forward.

In his Fulton speech, Churchill urged: ‘Do not let us take the course of allowing events to drift along until it is too late.’ We should learn the lesson. The time to stand up to China is now, and the country to do it is Britain.