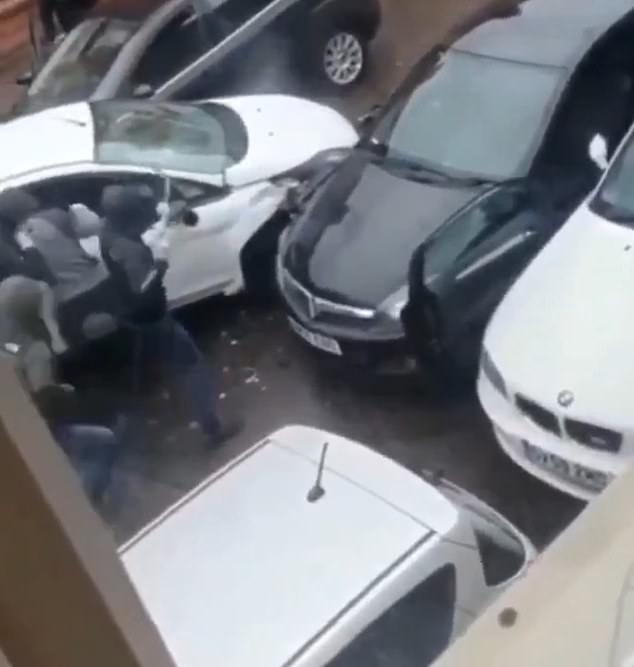 By Dave Rudge For Mailonline

This is the horrifying moment a gang of thugs surround a car in the middle of a residential street before repeatedly ‘stabbing the driver with a pitchfork’.

Around half a dozen hooded suspects blocked the road with vehicles to trap the victim before launching a frenzied assault in Stanton Street, Clayton, Manchester, at around 7.30pm on July 7.

Residents watched in terror as several men attacked the helpless motorist through the driver’s window, before one began lunging at him with a garden fork.

The 27-year-old victim was rushed to hospital with serious injuries but his condition is reported to be stable. No arrests have been made and enquiries are ‘ongoing’, police say.

A gang attacked a 27-year-old man in Clayton, Manchester. The man is in the white car with two men leaning into it, above. They arrived in the black car and other vehicles

Shocking video – captured by a neighbour on a mobile phone – was shared anonymously on social media over the weekend and has gone viral.

It shows several men attacking a white car and its driver in the street below, as a woman is heard calling the police in the background.

Suddenly, a man wielding a pitchfork starts thrusting it through the driver’s window at the victim.

The attackers then flee to their vehicles and ram the victim’s car out of the way, before scraping another parked car as they make their escape. 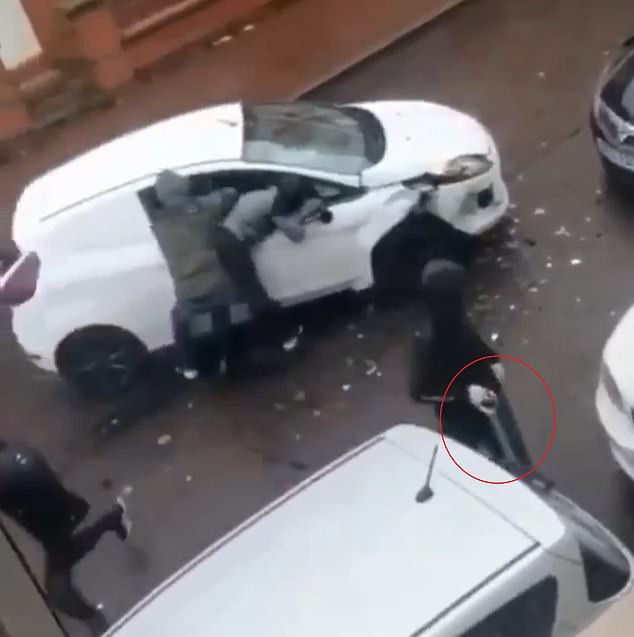 A suspect is shown holding a weapon in this clip. The 27-year-old was rushed to hospital with serious injuries, where he remains in a stable condition 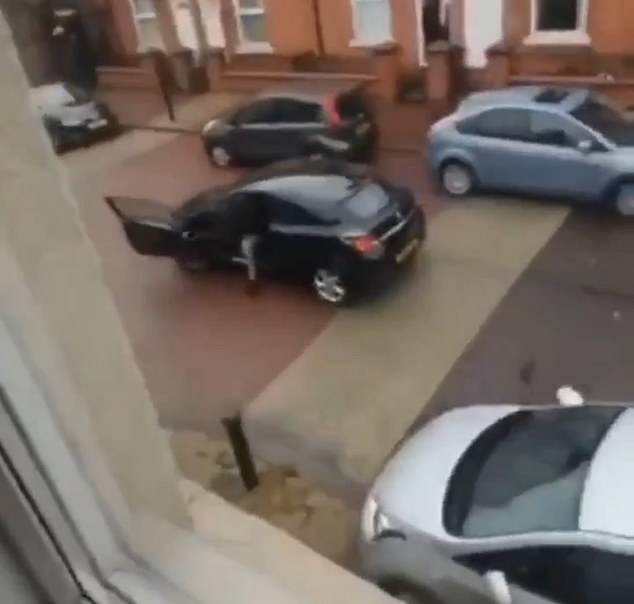 The injured victim is seen staggering out of his smashed up vehicle and walks into the road before the footage is cut.

An anonymous witness told the Manchester Evening News: ‘At first I thought a bomb had gone off. I could hear screaming, yelling, and smashing.

‘I ran to the front door, when I got out there were three cars in the road at different angles.

‘There were around 15 to 20 people, they were all attacking each other. Someone had a pitchfork they were stabbing people with.

‘It was absolutely terrifying. Two cars then drove off before police arrived.

‘It looked like there was a riot. There were so many people. The road is full of glass.’ 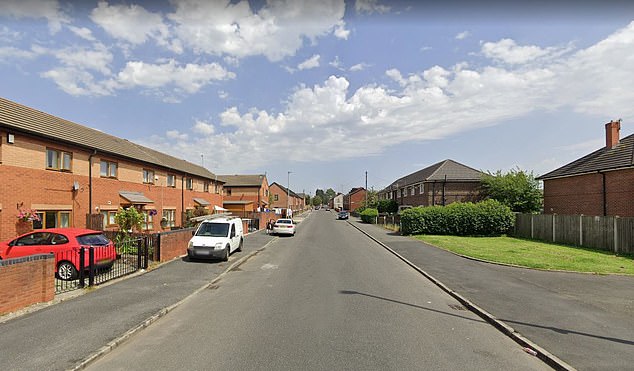 Above is Stanton Street in Clayton, Manchester, where the attack took place

A Greater Manchester Police spokesman said: ‘Enquiries have established that a group of men arrived in a number of cars, surrounding a further car.

‘Upon exiting the cars – brandishing weapons – the men proceeded to assault a 27-year-old man through the window of his car before making off in the same cars they arrived in.

‘Emergency services attended and the victim was taken to hospital with serious injuries where he remains in a stable condition.

‘No arrests have been made.’