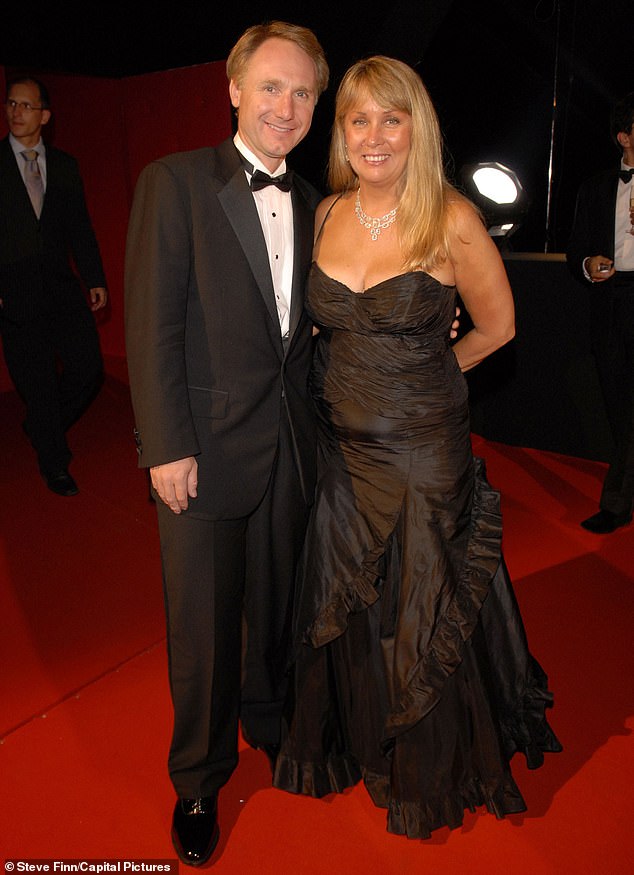 Dan Brown’s intricate codes, symbols and hidden meanings have beguiled fans across the globe, helping him to sell more than 200 million copies of his books, most notably the blockbuster The Da Vinci Code.

But today, he’s at the centre of his own real-life mystery with his ex-wife Blythe, whom he divorced last year, having filed a lawsuit accusing him of living a ‘proverbial life of lies’ for at least six years, of ‘sordid extra-marital affairs’ and of ‘secretly plundering significant sums of their marital assets’, which he then spent on four mistresses around the world.

The allegations, more befitting a character from a racy Harold Robbins novel than the bookish Brown, have stunned the literary world and they could not have come at a worse time for the 56-year-old writer, who is preparing to publish his debut picture book for children.

In his first interview since July’s sensational lawsuit, the American author reveals that he is countersuing Blythe, his wife of 21 years, in part for libel and slander, saying her claims are so far-fetched they belong in a novel.

‘I’m not going to disparage my former wife like she has me. But the lawsuit was written with no regard for the truth.

‘She received half of everything [in the divorce, which was finalised in December], more than half of everything, actually, and I’m shocked that she’s coming back for more and I completely dispute her account of what happened. It’s all been pretty sobering.’

The publication of The Da Vinci Code in 2003, Brown’s fourth novel, sparked a cultural phenomenon, infuriated the Vatican and catapulted him from little-known writer to global literary star.

The thriller centres on fictional Harvard symbologist Robert Langdon, who investigates a murder in Paris and stumbles upon an ancient society guarding ancient dark secrets.

The book introduces the notion that Jesus Christ and Mary Magdalene were married with children – a premise that annoyed the Vatican so much that it appointed an archbishop to rebut the novel’s ‘shameful and unfounded errors’. 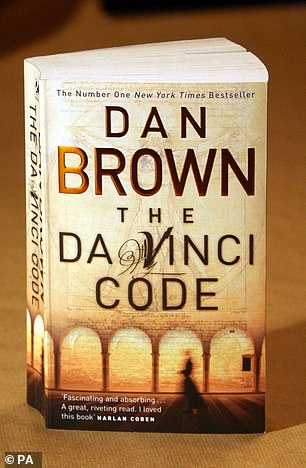 The Da Vinci Code, published in 2003, was Brown’s fourth novel

The movie adaptation, starring Tom Hanks as Langdon, made more than £500 million at the box office, with two further films, Angels & Demons and Inferno, pushing the global box office takings to more than £1 billion.

Brown is said to have been worth £120 million before his divorce.

He says of his ex-wife’s lawsuit: ‘It was designed to humiliate me, to ruin my personal life, ruin my professional life. That was the whole purpose. Brown’s countersuit against Blythe, who is 12 years his senior, makes for sad if extraordinary reading.

He alleges in his counter-claim that their marriage had become ‘increasingly dysfunctional’ and that the beginning of the end came in 2004 after the vast influx of wealth following the publication of The Da Vinci Code the previous year.

Also, far from being ‘a devoted wife and an innocent victim’, Brown says she ‘engaged in conduct that caused the marriage to be one in name only’ by the end of 2014.

In one instance he claims that after giving a speech in New York in 2013, he was told by his wife: ‘It turns my stomach to watch you on stage. I no longer recognise who you are.’

He says she also regularly mocked his love of exercise and fitness, calling it ‘vain and shallow’.

And when his mother was dying in June 2017 after a long battle with cancer, he says Blythe left him alone while she holidayed with companions in the Caribbean.

Tellingly, the intimate side of their relationship apparently ended in December 2014, after which both sought to fill the void in their lives and find solace in different ways.

For Blythe, that meant spending increasing amounts of time and money on equestrianism (she allegedly spent more than £7.5 million on her horse hobby during their marriage). For Brown, it involved dating – more of which, later.

Speaking from his home in New Hampshire, he says: ‘Our marriage was really over a long time ago. We just went our separate ways.

‘We were great for a long time together, but we just evolved separately, which people do. I’m just sorry that we couldn’t part ways with love and that it turned into this.

‘It’s sad, but I was deeply hurt by it.’ He insists he ‘tried very hard to make this marriage work’.

To that end, he took up riding lessons for a year, hoping that a shared interest might close the ‘growing chasm’ between them. ‘I wanted to go to marriage counselling and I asked many times, but she refused.’

The incident that made him realise the marriage was probably beyond repair happened in 2012. 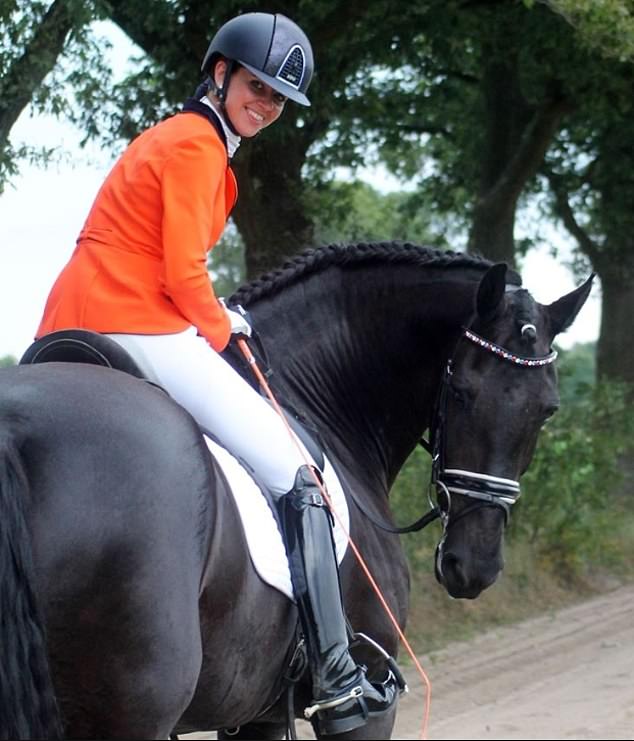 It was Brown’s relationship with their Dutch horse trainer, Judith Pietersen (pictured), 29, which appears to have rankled the most

Having convinced him to include a reference to thoroughbred Friesian horses and her own horse farm in Runnymede, New Hampshire, in his novel Inferno, he claims she demanded that four of her horses be flown to Florence, Italy to perform at a publishing event.

When her request was turned down, he says she told him off for not taking her side and demanded that he fire his team for not carrying out her instructions.

Brown refused. As he says now: ‘Marriage is hard. People move in different directions and some people can’t handle money either. It changes who you are. I loved Blythe deeply and there will always be a part of me that loves her.’

Perhaps the most incendiary part of Blythe’s lawsuit centres on her claims that the softly spoken writer had had a string of mistresses – including a hairdresser, his personal trainer and a political official on the Caribbean island of Anguilla (where the couple had a holiday home).

Brown concedes that he had a few dates with their hairdresser but that his ex-wife’s characterisation of him as a cad ‘was entirely unfair’.

He explains: ‘She was throwing everything at the wall, hoping something would stick. We both know why she was upset and she had a right to be, but we were lonely and we looked for fulfilment in other places.’

It was Brown’s relationship with their Dutch horse trainer, Judith Pietersen, 29, which appears to have rankled the most. 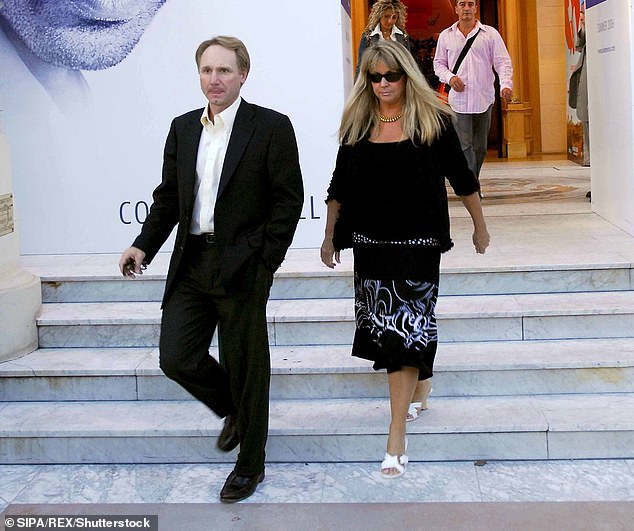 Mr Brown and his wife Blythe leaving the Carlton Hotel on May 16, 2006. Despite her lawsuit, Brown says he wishes Blythe ‘a lot of peace going forward because she’s obviously not at peace now’

She met the author in 2013 after Blythe hired her to train their horses. According to Brown, their relationship became romantic only after his marriage had become one ‘in name only’.

He later gave Pietersen a £260,000 Friesian horse called LimiTed Edition as a present.

Brown claims, though, that his ex-wife, despite having ten other world-class horses, wanted the animal for herself – ‘in order to inflict pain on the woman whom her ex-husband loved’.

While reluctant to talk in depth about his Dutch lover, Brown says: ‘We’re very much together and very happy.’

Also, he strenuously denies claims he siphoned funds from their marital assets, saying: ‘I gave Blythe half of everything I’d ever earned and more on top of that.’

Until their acrimonious split, Brown had often credited his wife for her part in his phenomenal success and assisting in the genesis of several of his books.

They met in 1990 when he wanted to pursue a career in music, and Blythe, the director of artist development at Los Angeles’ National Academy for Songwriters, took him under her wing.

When his music career failed to take off he switched to writing, producing three novels which, he says, ‘sold about a dozen copies each’. 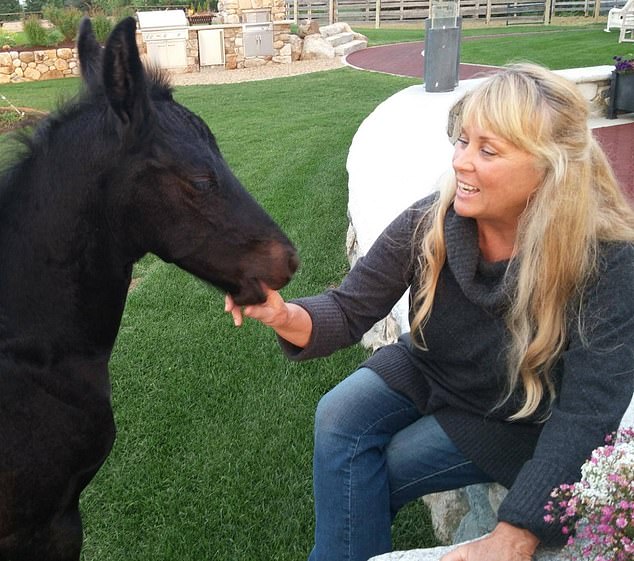 In his first interview since July’s sensational lawsuit, the American author reveals that he is countersuing Blythe (pictured), his wife of 21 years, in part for libel and slander, saying her claims are so far-fetched they belong in a novel

Then came The Da Vinci Code. The couple never had children, choosing instead a life of ‘creativity’.

Brown says: ‘This may be a terrible thing to say to anyone who has children, but for every one moment that I regret not having kids, I have three or four moments where I say, “Thank God I don’t!”

‘All I have to do is be seated next to a screaming baby on a plane and I’m like, “You know what? I’m fine.” But I have a lot of children in my life: I have nephews.’

So his latest project, a children’s book entitled Wild Symphony, is a natural development as he hopes to ‘instil in children an appreciation of classical music’.

Featuring an illustrated animal orchestra whose 21 members each have their own piece of music (composed by Brown himself and performed by the Zagreb Festival Orchestra), readers download a free app and hold their mobile phone over the page to play the correct song for each animal.

Complete with Brown’s trademark hidden codes and puzzles – there’s a Masonic cipher at the end of the book – he says: ‘It’s been such a pleasure seeing young people excited about it.’

It’s a huge change of pace for someone who has been condemned by the Vatican.

Indeed, that experience has given him much sympathy for Harry Potter author J. K. Rowling, who has fallen victim to the so-called ‘cancel culture’ for comments about transgender people.

Looking back, he says: ‘You don’t write a book that says Jesus had a love affair and expect that the world’s going to universally appreciate it.

‘I’ve become very accustomed to people saying things about me that aren’t that nice.’ But he never expected one of those people to be his wife.

Despite her lawsuit, Brown says he wishes Blythe ‘a lot of peace going forward because she’s obviously not at peace now.

‘I choose just to remember all the great times we had and all the creativity that we had together.’

So after everything that has happened, does he think he’ll ever marry again? It doesn’t need anyone to decipher the coded message behind his answer. ‘No!’ he replies. ‘I really don’t.’