Angelina Jolie and Brad Pitt are in agreement on a recent decision to lift a ‘standard temporary restraining order’ on their assets, which was put in place during their divorce proceedings

According to ET, this allows the former couple to sell possessions owned during the span of their two year marriage, which seemingly opens the door for Jolie to offload her 50% shares of their French winery and estate, Chateau Miraval.

But earlier this week, Brad filed a lawsuit accusing Jolie of a ‘vindictive’ plan to sell her shares, circumvent his right of first refusal, and profit from the ‘incredible amount of work, time and money’ invested by the actor and his business partners, as per exclusive legal docs obtained by DailyMail.com

Court battle: An agreement is in place that could allow Angelina Jolie to sell off her shares of a $164M winery and estate in France she and ex-Brad Pitt own, but a lawsuit filed by Pitt’s legal team could prove to make her sale difficult

Originally, when the former couple bought their shares of Quimicum, the company that owns the Chateau Miraval, in 2008, Pitt and his company, Mondo Bongo, had a 60/40 majority share over Jolie and her company, Nouvel.

But that majority was evened out when Mondo Bongo transferred 10% to Nouvel, according to the lawsuit.

The legal documents claim Pitt sold Jolie the shares for a symbolic price of 1 Euro in 2013, which was one year before they were married and three years before Jolie filed for divorce from Pitt.

The new lawsuit filed by Pitt’s legal team is trying to have that 10% transfer annulled, in a move to restore its 60/40 shareholder majority in the estate, on the grounds that the 1 Euro price tag is not a ‘serious’ amount as required by Luxembourg law. 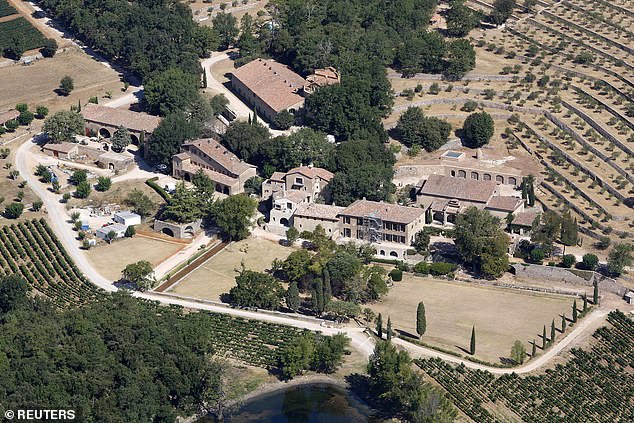 The battle: In recent days, Pitt’s company, Mondo Bongo, filed a lawsuit against Jolie’s company, Nouvel, claimin she has been trying to cut Pitt out of a money-making deal to offload her shares in Chateau Miraval, and that she never gave Pitt the first option to buy her out

Sources told Page Six that as part of their agreement, Pitt and Jolie agreed to ask each other for permission if they ever wanted to sell their shares.

This new lawsuit also alleges Jolie tried to sell her shares without giving Pitt right of first refusal, and profit from the ‘incredible amount of work, time and money’ invested by Pitt and his business partners in growing the brand.

‘He [Pitt] did all the work; she did nothing,’ a source claimed.

‘It is worth mentioning that, for the last four years, Nouvel [Jolie’s company] did not act in the best interest of Quimicum by systematically delaying the approval of the annual accounts and the renewal of the manager,’ the suit states.

Jolie’s actions are yet ‘another example of this person trying to circumvent rules and avoid their obligations,’ and that this latest move ‘is pretty consistent’ with her past behavior, a source close to litigation old Us. 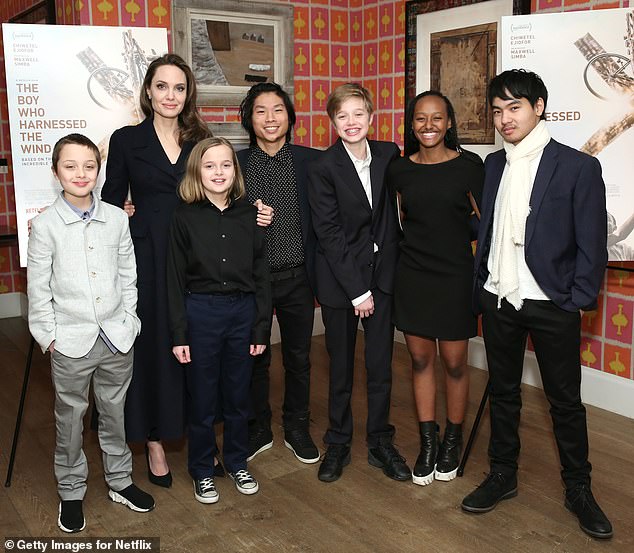 Jolie filed for divorce from Pitt in September 2016, citing irreconcilable differences. Their divorce was finalized in 2019, but they continue to battle it out over custody of their six children; Knox, 13, Vivienne, 13, Pax, 17, Shiloh, 15, Zahara, 16 and Maddox, 20

Prior to reaching an agreement, Pitt’s company alleged that it had made numerous good-faith attempts to settle this issue amicably, but was forced to file a lawsuit to annul the transfer of Quimicum shares, and bring their respective ownerships of the company back to a 60-40 split.

The Chateau and the 1,000-acre estate near Aix-en-Provence in which it sits was once the couple’s getaway. It also has sentimental value, as it’s the place where Pitt and Jolie were married, in front of their six children, in 2014.

Jolie filed for divorce from Pitt in September 2016, citing irreconcilable differences. Their divorce was finalized in 2019, but they continue to battle it out over custody of their six children: Maddox, 20, Pax, 17, Zahara, 16, Shiloh, 15, and twins Vivienne and Knox, 13.

Just three months ago, in June, Pitt, 57, was awarded joint custody – a decision that Jolie, 46, vowed to fight ‘with everything she’s got.’ Sentimental value: Pitt and Jolie were married in front of their six children at the winery estate, Chateau Miraval, in 2014, which is now valued at $164 million (140million Euros)