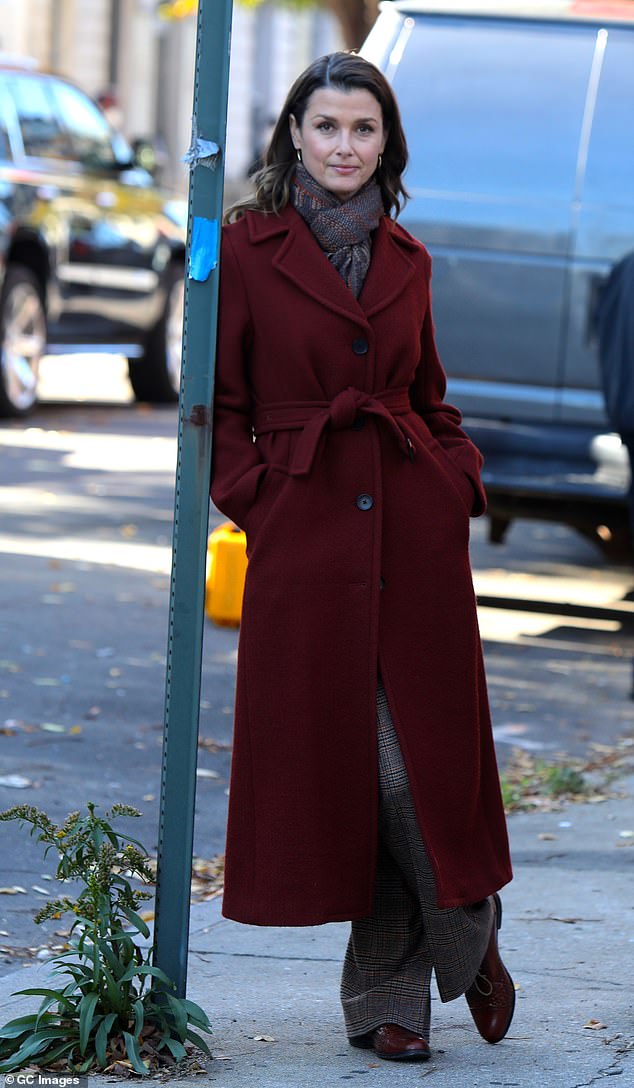 By Kevin Kayhart For Dailymail.com

The cast and crew of the police procedural series Blue Bloods are hard at working shooting season 11, all while adapting to new health and safety protocols in the wake of the COVID-19 pandemic.

Two of the main stars, Bridget Moynahan and Steve Schirripa, were spotted filming a scene on the streets of New York City, and waiting patiently in-between takes.

Moynahan, who plays Assistant District Attorney Erin Reagan, looked stylish in a burgundy overcoat that was cinched-in at the waist with a built-in belt.

Back on set: Bridget Moynahan, 49, looked stylish during a break from shooting the 11 season of her crime drama series Blue Bloods in New York City on Thursday

The 49-year-old actress was also styled in brown-plaid slacks, brown shoes and a scarf wrapped around her neck.

At certain points she stopped and struck a pose or two for the admiring photographer with her dark brown tresses worn long, just past her shoulders, and a part on the slight right.

She also got playful in front of the camera with Schirripa, who has played Detective Anthony Abetemarco since he joined the cast in 2015. 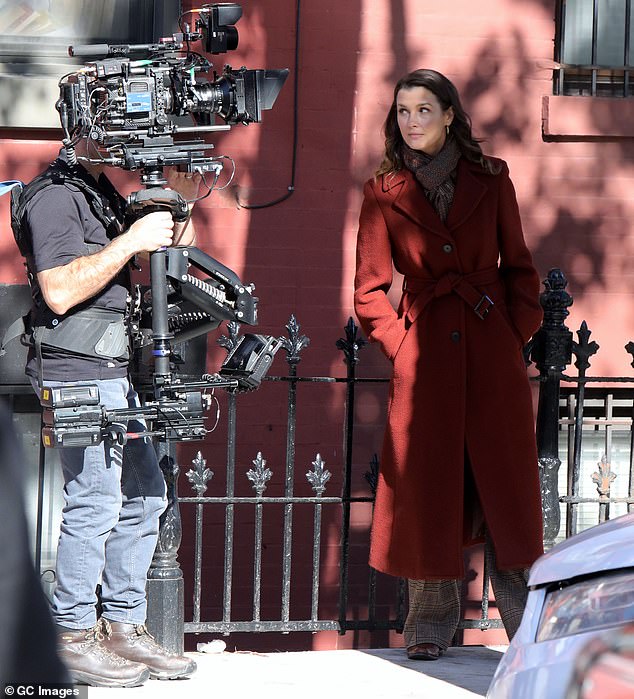 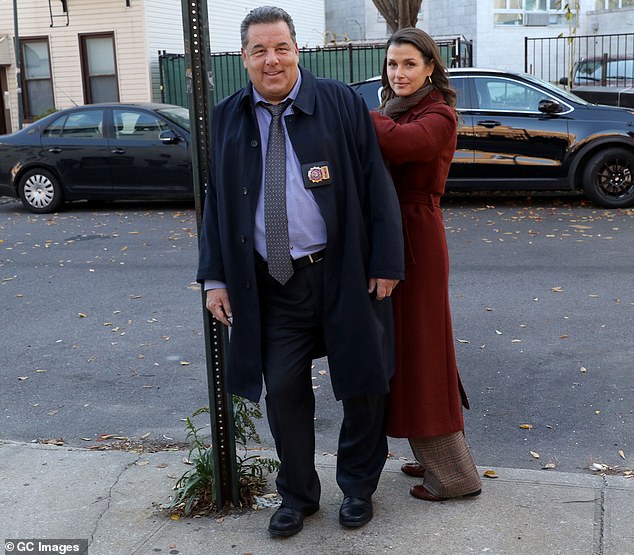 Cheeky: At one point, in-between takes, Moynahan snuck up from behind and gave a friendly jab at co-star Steve Schirripa

In one photo, Moynahan snuck up from behind and gave a friendly jab at her co-star in the back.

Schirripa, who first gained notoriety for his role as Bobby Baccalieri in the ground-breaking series The Sopranos, was decked out in the customary detective’s outfit consisting of slacks, shirt and tie, and matching zipper jacket.

Blue Bloods centers around the Reagans, an an Irish Catholic family with a history of working in various branches of law enforcement in New York City. 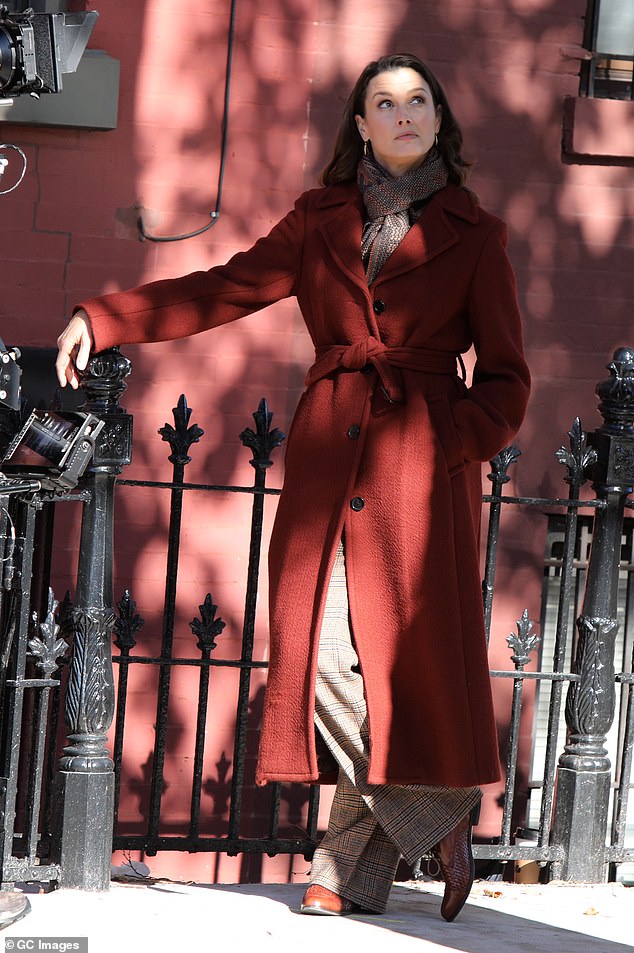 Wardrobe: The actress was also styled in brown-plaid slacks, brown shoes and a scarf wrapped around her neck for the scene 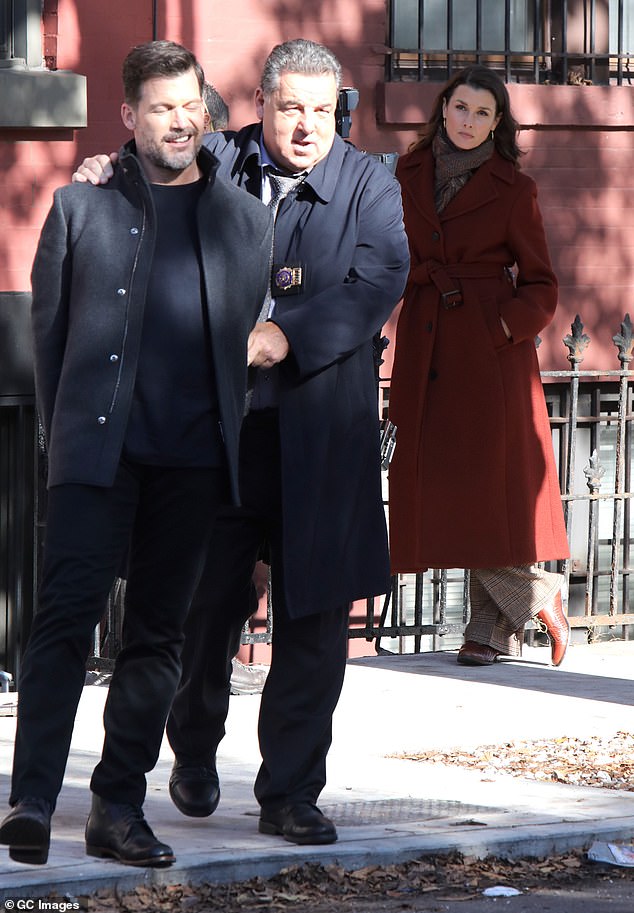 Action! As the cameras rolled Schirripa, who plays Detective Anthony Abetemarco, arrested a suspect and cuffed him as Moynahan’s Reagan looked on

While shooting this year, the crew and cast have had to follow stricter guidelines amid the coronavirus  crisis, which includes wearing a mask between scenes and frequent hand washing.

The 11th season of Blue Blood is expected to debut sometime in 2021, but no formal announcement has been made about an exact date. 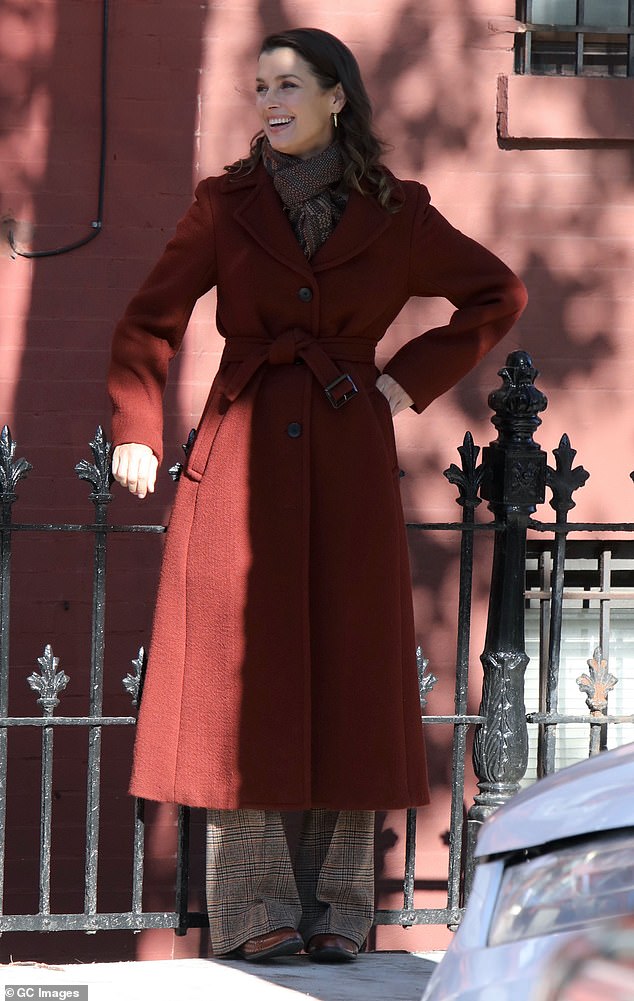 Coming: The 11th season of Blue Bloods is expected to premiere on CBS in 2021