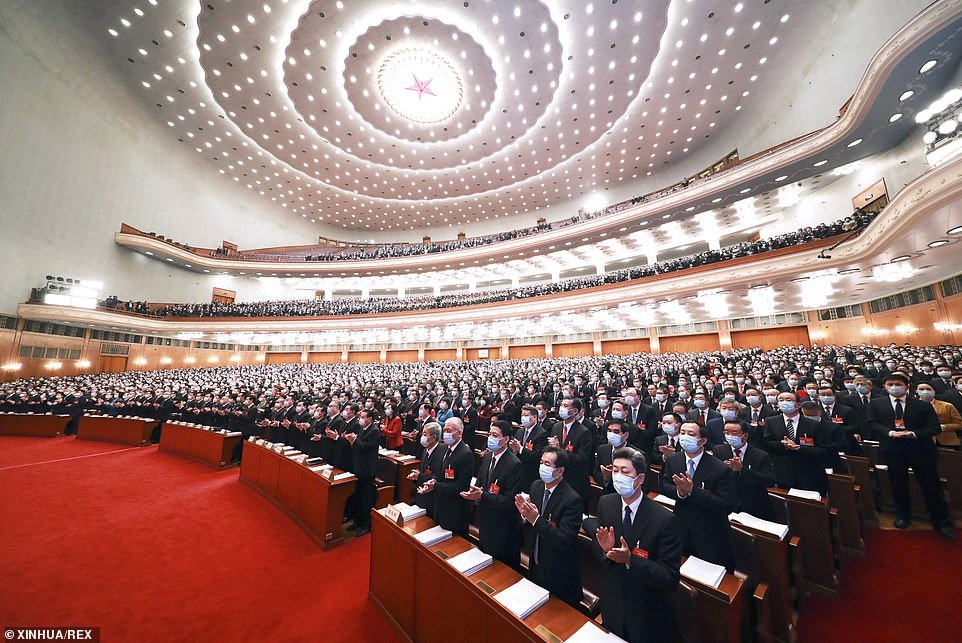 China’s communist rulers handed themselves veto powers over selecting Hong Kong’s lawmakers as part of a campaign to eliminate dissent and ensure a ‘patriotic’ government in the city following huge democracy rallies in 2019.

Legislation to allow China’s communist rulers to vet all election candidates in Hong Kong was tabled at the opening of the nation’s rubber-stamp parliament in Beijing.

It came a day after dozens of democracy campaigners in the financial hub – including former lawmakers – were jailed under a security law that was passed during last year’s parliamentary session.

Chinese communist rulers gather for the opening of the rubber-stamp parliament in Beijing on March 5. The annual week-long gathering is attended by roughly 3,000 delegates in the Great Hall of the People. 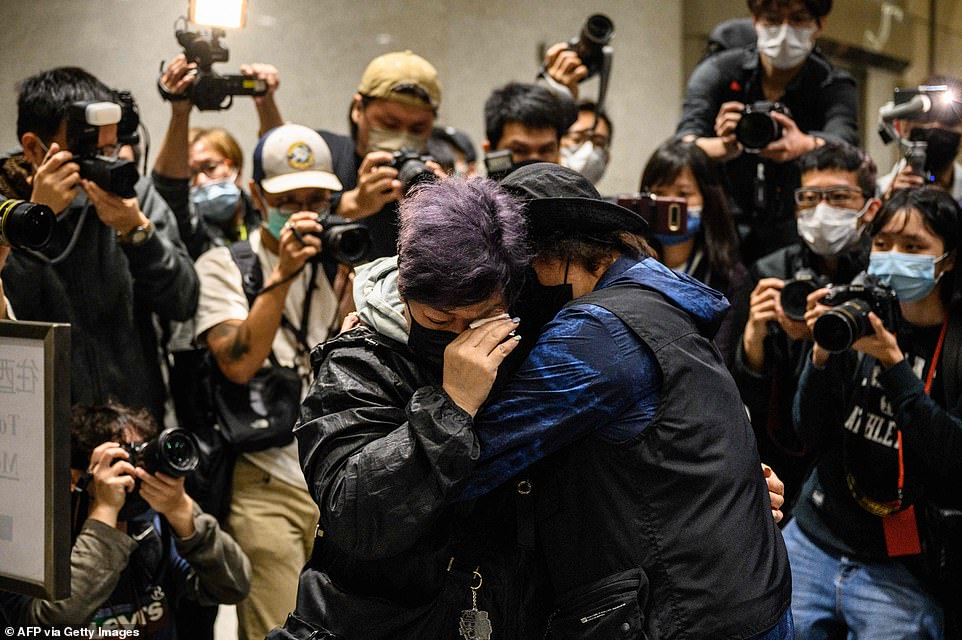 Hong Kong pro-democracy supporters comfort each other as they are surrounded by media outside the West Kowloon Court in Hong Kong on March 4, 2021. Dozens of democracy activists were jailed under the financial hub’s new ‘security law’ 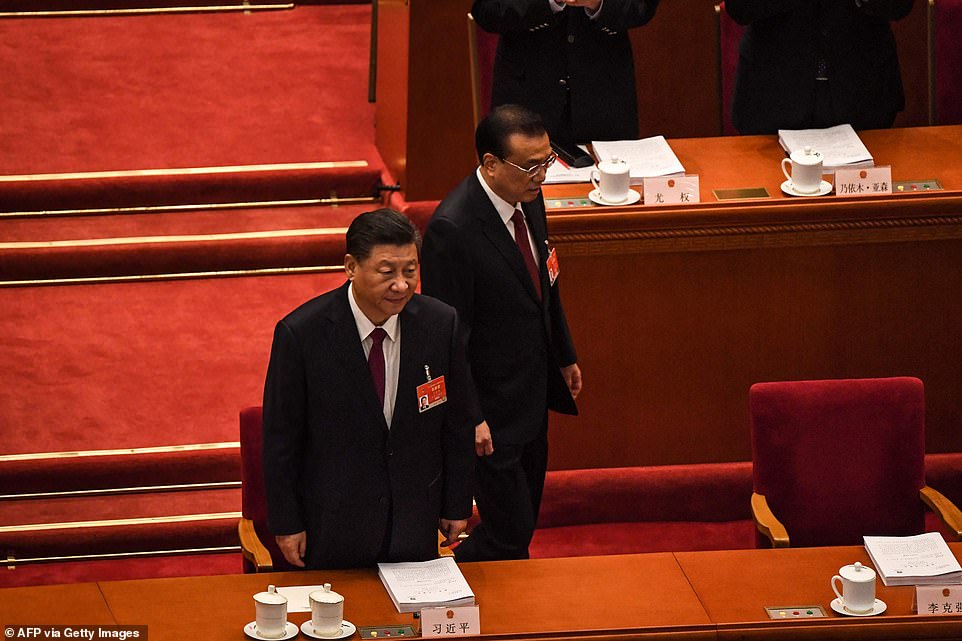 Chinese President Xi Jinping (left) arrives for the opening session of the National People’s Congress in Beijing on Friday. The communist ruler has tried to dismantle Hong Kong’s democracy as rallies have raged in the financial hub

China had committed to giving Hong Kong a degree of autonomy when it reverted from British colonial rule in 1997.

But it began moving quickly to dismantle the financial hub’s democratic pillars in response to huge and sometimes violent democracy rallies that paralysed the city throughout 2019.

The introduction of the vetting legislation – expected to be approved next week – was quickly interpreted as one of the final nails in the coffin of Hong Kong’s democracy movement.

‘If the measures are passed, as I’m sure they will be, then the voice of the opposition will be effectively silenced,’ said Willie Lam, China analyst at the Chinese University of Hong Kong. 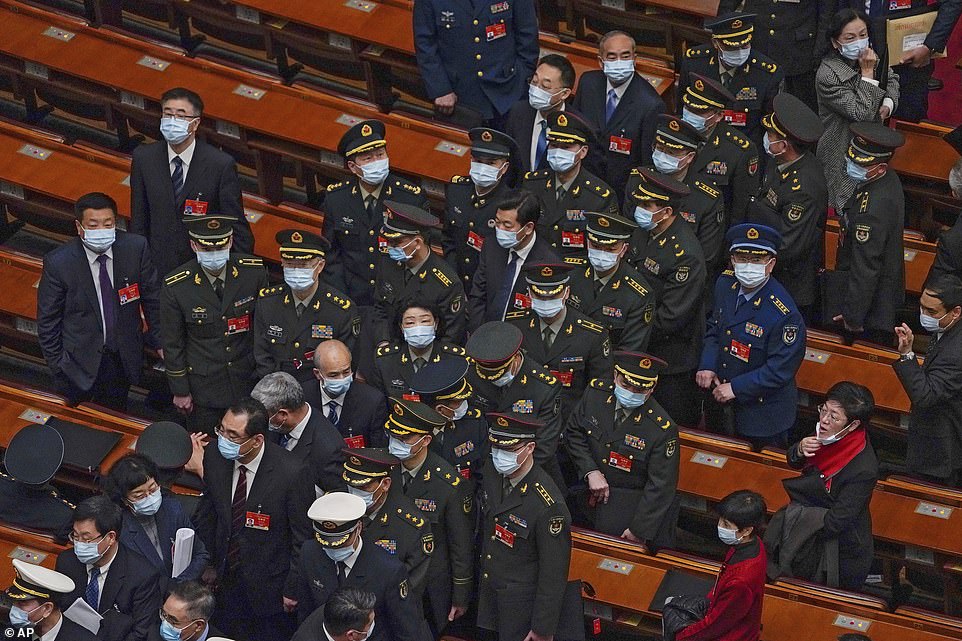 Military delegates leave the hall after attending the opening session of China’s rubber-stamp parliament. Chinese officials announced that the nation’s military budget would be hiked by 6.8 percent in 2021 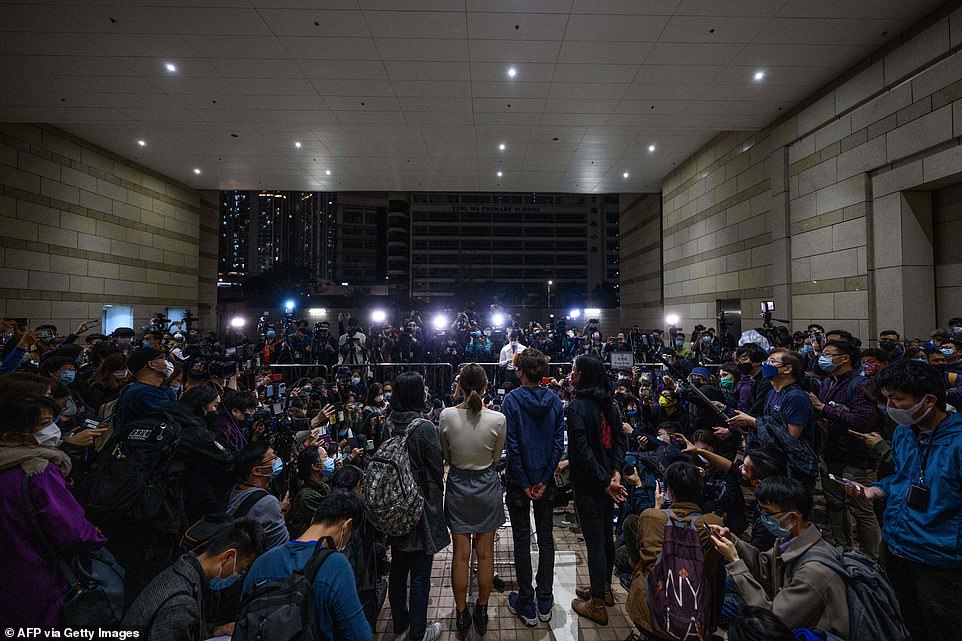 Hong Kong pro-democracy activists speak to the media outside the West Kowloon Court in Hong Kong on March 4 after a marathon bail hearing of 47 of their allies. The activists were jailed as China continued its crack down on the city 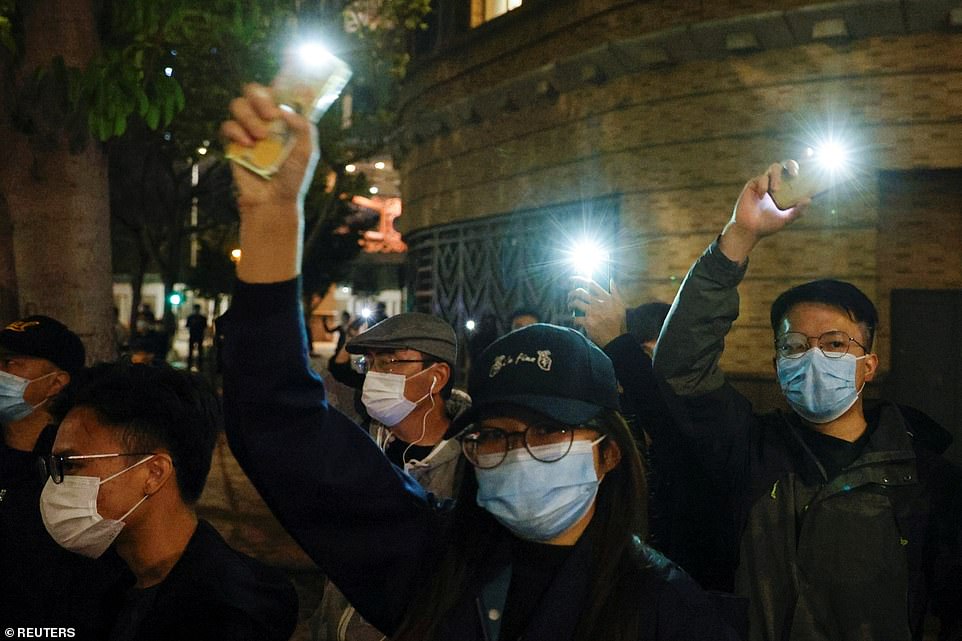 ‘This will effectively wipe out any remaining opposition.’

The measure had been widely expected with Beijing officials stating in the lead-up that only ‘staunch patriots’ – those loyal to the Communist Party – should be involved in governing Hong Kong.

The Chinese congress session opened with an annual address by Premier Li Keqiang, who made no mention of Hong Kong besides Communist Party boilerplate about the city continuing to enjoy a ‘high degree of autonomy.’

The annual week-long gathering of roughly 3,000 delegates, held in the cavernous Great Hall of the People in Beijing, is China’s biggest political event of the year.

China’s parliament is called a rubber-stamp meeting because legislation brought before delegates if often agreed upon by communist party leadership well in advance of the public gathering. Dissenting votes on bills are rare.

The highly choreographed display is held to drive home the unquestioned domestic power of the Communist Party while updating China and the world on its economic, political, environment and foreign policy priorities. 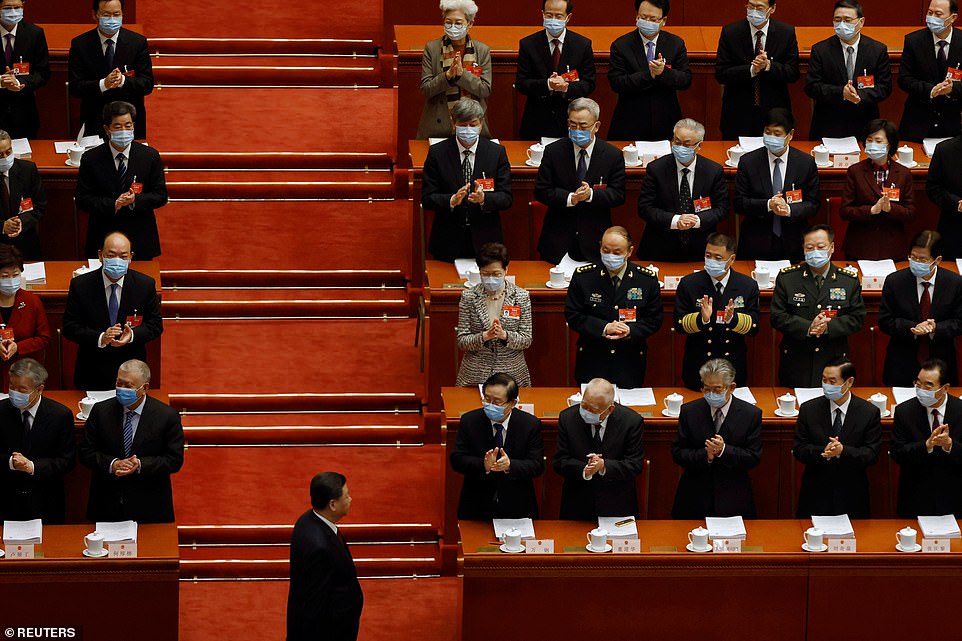 Chinese President Xi Jinping is applauded by Hong Kong Chief Executive Carrie Lam and other officials as he arrives at the rubber-stamp parliament in Beijing. Officials said the country was aiming for economic growth above 6 percent this year 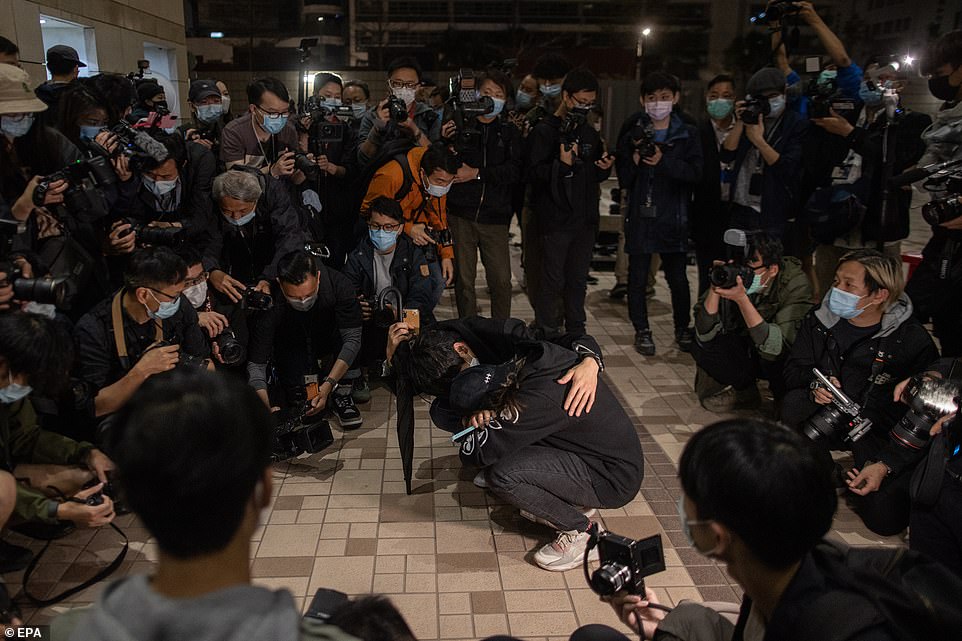 Pro-democracy supporters comfort each other after hearing the bail results for fellow activists on Thursday. Chinese Premier Li Keqiang hardly mentioned Hong Kong in his opening speech to the country’s parliament on March 5

The event takes place with China outpacing other major economies after bringing the coronavirus pandemic, which first emerged on its soil, under control through draconian lockdowns and mass testing.

Li said the government was aiming for 2021 growth in the world’s second-biggest economy of ‘above 6 percent’.

‘In setting this target, we have taken into account the recovery of economic activity,’ Li told delegates in China’s equivalent of a ‘state of the nation’ address.

China’s finance ministry, meanwhile, revealed that the nation’s military budget – the world’s second largest after the United States – would increase 6.8 percent in 2021 to 1.36 trillion yuan ($210 billion).

But China’s official budget number is widely believed to be lower than true spending.

Li made no direct mention of brittle ties with the United States, China’s trading partner and geopolitical rival, with all eyes now on how the relationship may evolve under new US leader Joe Biden.

The NPC session may consider a proposed revision to wildlife protection laws that would permanently ban eating most wildlife, amid the belief that the pandemic came from an animal host.