By David Mellor for Event

This impressive debut album from Tunbridge Wells-born tenor Freddie De Tommaso, still in his 20s, perhaps suggests a star is born. But it’s a bit early to say just yet.

Decca’s reigning star tenor, Joseph Calleja, issued his first album when only 26, and it was a fully fledged recital of top operatic arias. De Tommaso is not at that stage and sticks here primarily to a well-chosen group of Neopolitan songs.

Three of them come from another accomplished Anglo-Italian musician, Paolo Tosti, Queen Victoria’s music master, later knighted by Edward VII. Frankly, De Tommaso’s performances are a bit rough and ready, showing him to be very much a work in progress. 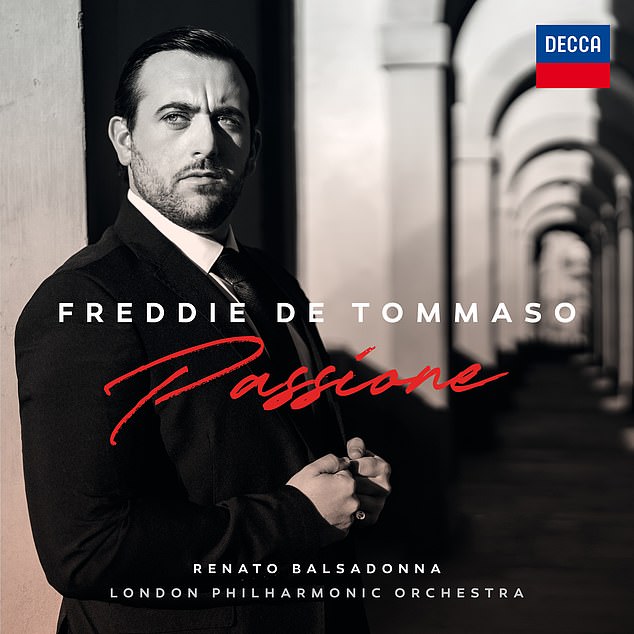 Frankly, Freddie De Tommaso’s (above) performances are a bit rough and ready, showing him to be very much a work in progress

Perhaps a better indication of how far he could go can be heard in two early Puccini songs. The big tune from Sole E Amore was later raided by the composer to provide Rodolfo’s principal melody in Act 3 of La Bohème, and much of Mentia L’Avviso reappeared in Puccini’s first stage hit, Manon Lescaut.

This tune is totally memorable.

In both of them De Tommaso reveals a commanding vocal presence, which explains why, had Covid not sadly intervened, he would have taken the starring tenor role in Tosca at the Royal Opera last month.

Cara Mia by Mantovani, who also lived in Tunbridge Wells, provides a direct comparison with Calleja, who featured it in his recent Mantovani tribute, also on Decca.

Calleja has much more honeyed tones but De Tommaso, though without Calleja’s vocal beauty, undeniably has a heroic vocal presence. The threat to him, with so many opera houses beating a path to his door, is doing too much, too soon, and damaging his voice.