The trailer for the upcoming monster movie Godzilla Vs. Kong rocked the internet on Sunday.

The trailer starts off with a bang, showing debris launched onto buildings and citizens taking to underground tunnels for protection after a huge disaster.

King Kong seems to be the solution, seen sedated while being transported on a military ship as star Alexander Skarsgard’s character geologist Nathan Lind says: ‘This is our only chance. We have to take it.’

Creature feature: The trailer for the upcoming monster movie Godzilla Vs. Kong hit the internet Sunday

The 44-year-old actor walks onto the ship’s deck where he gets to see the giant ape, and tells someone off-screen: ‘We need Kong. The world needs him to stop what’s coming.’

Actress Kaylee Hottle, who plays a young girl named Jia, exits a pathway lined with lush greenery to offer what appears to be an arrowhead to a free Kong, appearing to communicate with the monster.

Rebecca Hall, who plays Ilene Andrews, tells Skargard’s character that she knew about Hottle’s ability and that she had sworn to take care of her; the actress also notes that Kong may have done the same.

Immediately afterwards, Godzilla’s back spikes are shown ripping through the ocean and into a military ship, where they cut the frigate in half.

Dual role: The upcoming monster film serves as a sequel to both 2019’s Godzilla: King Of The Monsters and 2017’s Kong: Skull Island

Put ’em up: The two iconic movie characters will face off once more in the 2021 reboot of the story

The classic monster faces off with several fighter planes, but when they fail to subdue the creature Kong roars into the ocean, pushing Godzilla from the water.

When the giant lizard climbs onto the deck of a ship, an unshackled Kong hits him with a vicious right hook and subsequently shoulder-checks the monster back into the ocean.

After the military fires more explosives into the water, Godzilla shoots a laser beam up towards the surface and narrowly misses Kong when he jumps off the deck of a ship that had been hit by his adversary’s attack.

Figuring it out: The film partially centers on the search for a cause behind Godzilla’s aggression and Kong’s attempts to stop them

The Toho monster then enters a neon-lit city and creating more destruction while cast member Kyle Chandler says: ‘Godzilla is out there and he’s hurting people-and we don’t know why.’

Afterwards, costars Millie Bobby Brown, who reprises her role as Madison Russell from Godzilla: King of the Monsters, and Julian Dennison meet up with Brian Tyree Henry, where they surmise that an unknown force is provoking the giant lizard into lashing out in rage.

Kong is then shown placing his hand on a petroglyph and subsequently raising a blunt weapon above his head while Hall remarks: ‘The myths are real, there was a war…and they’re the last ones standing.’

The monsters continue to duke it out across multiple locations as Hall tells someone the super-ape will fight until the end.

‘Kong bows to no one,’ she explains.

Backstory: Hall discovers Kong’s past and says after a prehistoric war, he and Godzilla were ‘the last ones standing’

Shared universe: The film takes place in Warner Bros’ ‘Monsterverse’, which would unite giants from film history under one franchise

The final shot shows Godzilla firing a laser bolt at Kong, who deflects it with a weapon that he brings down on his adversary’s head, where the trailer ends.

Godzilla Vs. Kong was first confirmed in 2015 along with the creation of Warner Bros.’ ‘Monsterverse,’ which would unite giants from film history under one franchise.

A writer’s room was assembled in 2017, weaving the stories of the two titans together to serve as a sequel to both Godzilla: King of the Monsters and Kong: Skull Island.

Long time coming: Development on the upcoming feature was initially announced in 2015

Delays: The film originally planned for a May 2020 premiere, but it ultimately suffered several delays before settling on March 26th 2021

Filming began in 2018 and continued for an extended period of time, with production wrapping in the spring of the following year.

The film originally planned for a May 2020 premiere, but it ultimately suffered several delays before settling on March 26th 2021.

The picture is set to have a simultaneous theatrical and home debut on the HBO Max streaming service.

Coming soon: Godzilla Vs. Kong is set to be released in both theaters and on HBO Max on March 26th

This is not the first time that the two monsters have faced off on screen, as they both appeared in the 1962 Japanese film King Kong vs. Godzilla.

The soon to be released film is a re-imagining of the original Toho Studios film, which was released on August 11, 1962; its the third film in the Godzilla franchise but the first to be in color.

As opposed to CGI, which has been used to generate the characters over the past decades, the creatures were portrayed by actors wearing suits.

The  film controversially ended without definitively declaring Kong as the victor in the film, although the production company later clarified that he indeed did come out on top.

A persistent myth endured for years that maintained that a second ending to the film which was thought to have Godzilla as the winner of the face-off, which has since been debunked. 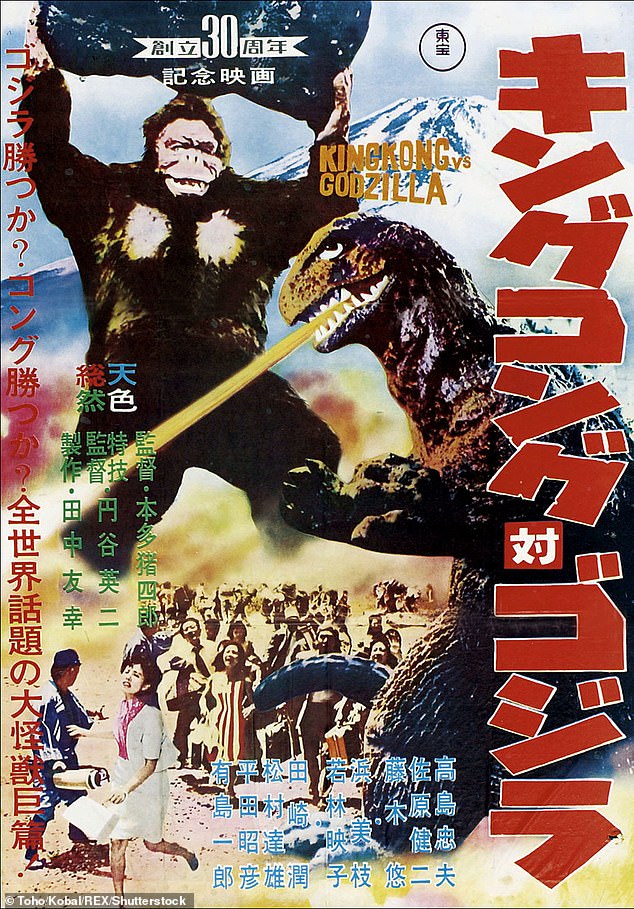 Looking back: The two giant creatures previously faced off in the 1962 Japanese film King Kong Vs. Godzilla 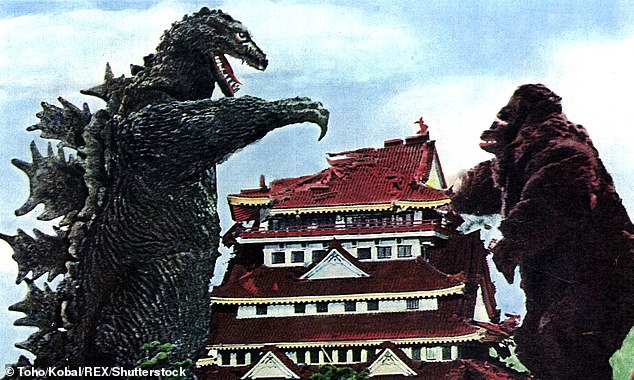 Urban myth: For years after the film’s release, it was reported that a second ending which was thought to have Godzilla as the winner; it has since been proven as false 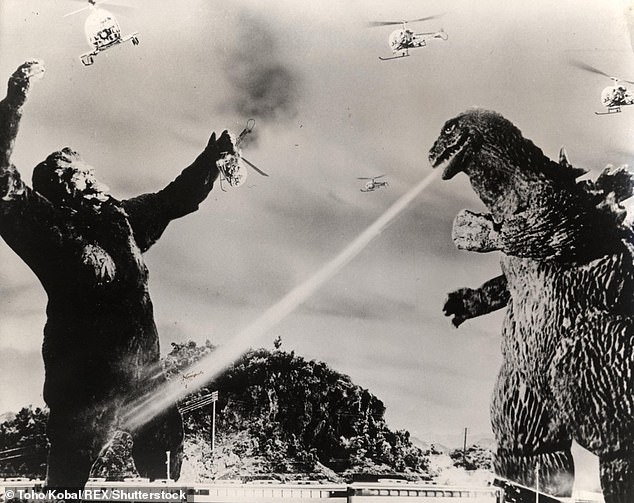 Practical effects: In the 1962 film, the monsters were physically played by actors in costumes