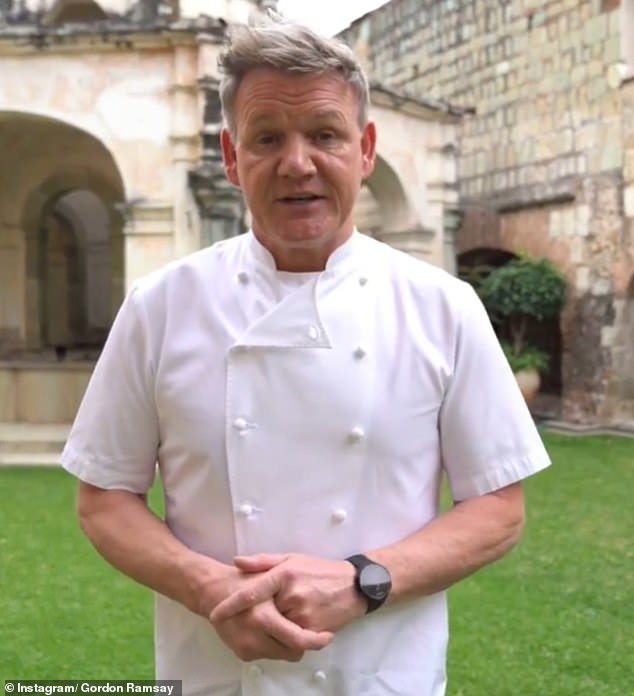 Gordon Ramsay has revealed he’s lost £57 million during the Covid pandemic after being forced to close his restaurants for much of 2020.

The chef, 54, who owns 35 restaurants and is scheduled to open five more in 2021, admitted he’s been ‘devastated’ by the financial impact of the crisis, and lost £10 million worth of bookings in January alone due to the third lockdown.

It comes after Gordon revealed he was forced to cancel 22,000 bookings for his restaurants in December as England was placed in tiered restrictions following a rise in Covid cases.

Huge impact: Gordon Ramsay, 54, has revealed he’s lost £57 million during the Covid pandemic after being forced to close his restaurants for much of 2020

Gordon told The Sun: ‘In December we had £10m worth of reservations wiped out overnight,’ he exclusively tells The Sun from his London home over Zoom.

‘As of 19th March to 3rd February this year we’ve suffered £57.5million worth of turnover down.’

In December Gordon announced the opening of three new restaurants across London after England was brought out of a second lockdown, but just weeks later the hospitality sector was forced to close once again. 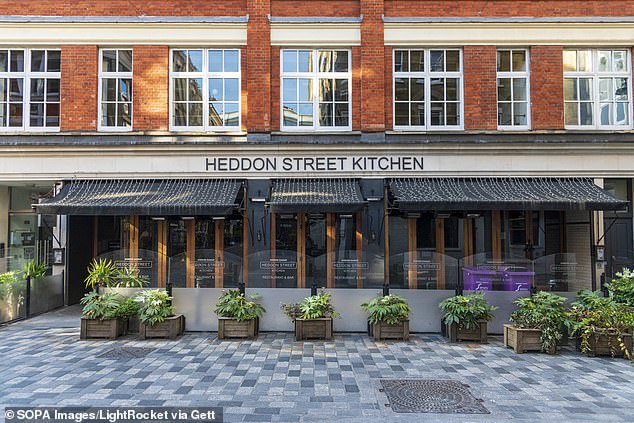 Difficult: The chef who owns 35 restaurants, admitted he’s been ‘devastated’ by the financial impact of the crisis (Gordon’s Heddon Street restaurant is pictured)

Gordon added he’s been forced to take up the Government’s furlough scheme to save thousands of jobs across his restaurant empire.

He added: ‘I get criticised for being wealthy, but the responsibility on my shoulders – the livelihoods at stake – is huge.’

It comes after Prime Minister Boris Johnson finally revealed plans to re-open restaurants in his road map out of lockdown.

After weeks of being restricted to delivery and takeaway service only, pubs and restaurants will be allowed to welcome customers from up to two households or in accordance with the rule of six, outdoors from April 12. 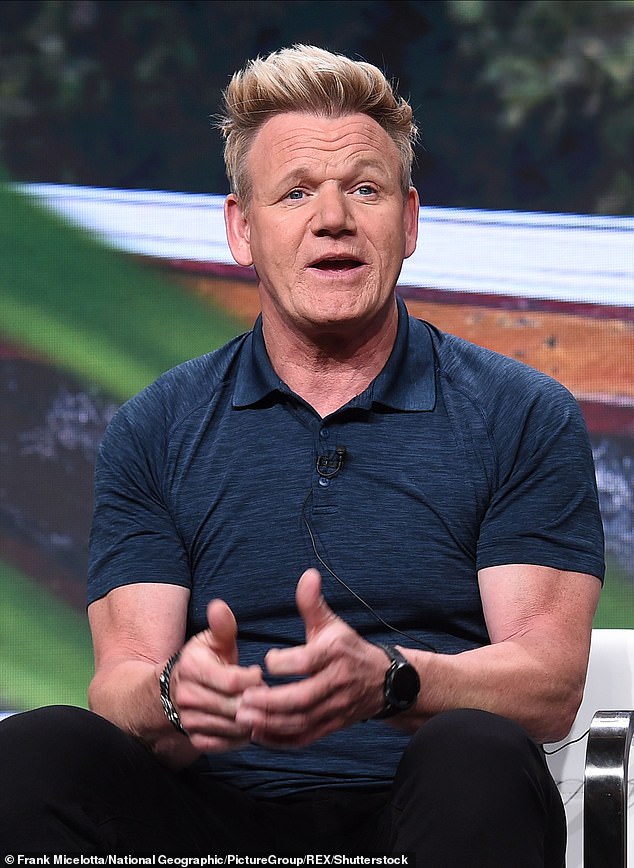 Desperate measures: Gordon added he’s been forced to take up the Government’s furlough scheme to save thousands of jobs across his restaurant empire

Last week Gordon revealed he had to cancel over 22,000 bookings for his restaurants in December.

He said the effect Covid has had on the hospitality industry is ‘devastating,’ but he remains optimistic his business could re-open by Easter.

Speaking on The Graham Norton Show Gordon said he’s planning to open up even more restaurants when lockdown is eased, following reports the government plan to allow pubs and restaurants to re-open in May. 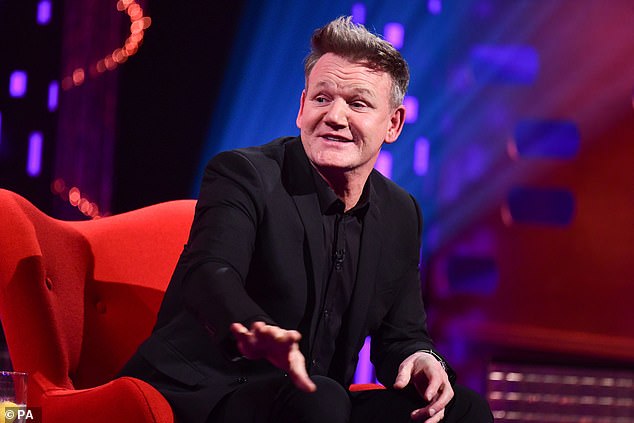 Shocking: Last week Gordon revealed he had to cancel over 22,000 bookings for his restaurants in December (pictured on The Graham Norton Show)

Gordon admitted that thousands of bookings across his business were removed when Tier 3 restrictions in December forced many restaurants to close just weeks after re-opening following the second lockdown.

Weeks later the government placed the entire country in lockdown, with not set date as to when pubs and restaurants can re-open.

He told Graham: ‘It’s devastating. When you think about breaking bread and having fun with friends and family, it’s just tragic not to have that.’

The Hell’s Kitchen star added: ‘When we reopened last July, the atmosphere was monumental and electrifying, we didn’t even need music, so to be shut backdown was tough. 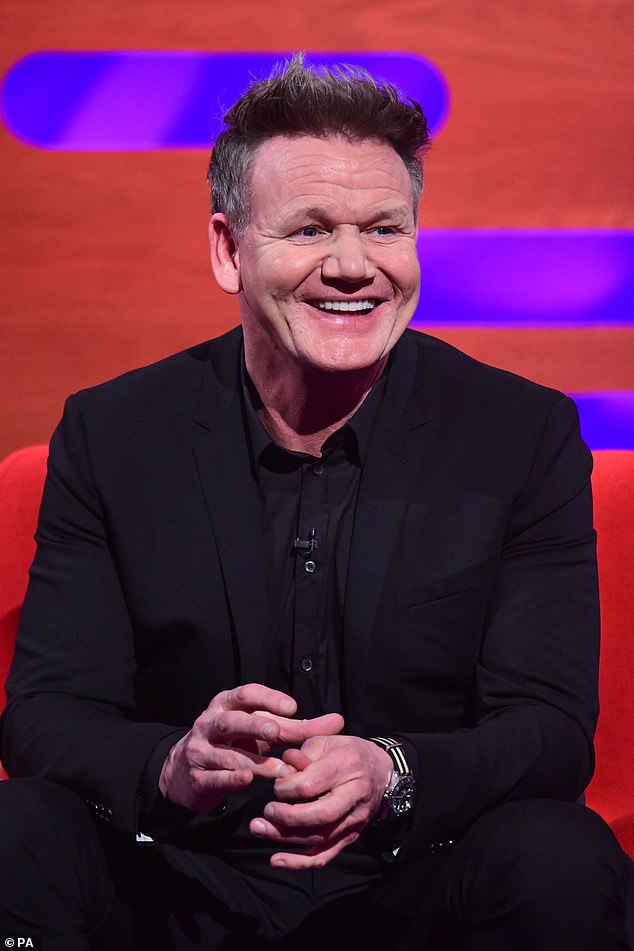 Tough: The chef said the effect Covid has had on the hospitality industry is ‘devastating,’ but he remains optimistic his businesses could re-open by Easter (pictured on the chat show)

‘In December, our most important month, we cancelled 22 and a half thousand reservations, but I have always been optimistic.

‘It is tough but we will come out of this – we’ve re-created, re-developed and researched new ideas so when we come out of this lockdown we will open up as new restaurants. We are hoping we will re-open at Easter. It would be a dream.’

Gordon also spoke to Graham about his new BBC quiz show Bank Balance, revealing the series was developed during the last lockdown.

He said: ‘It was developed via Zoom during lockdown this time last year, with the team spread out all over the country – I was in Cornwall with my beloved neighbours – and we got this high-pressured game to an amazing place.

‘The set is really spectacular and intimidating and then you’ve got me asking the questions! It’s really exciting.’

The hospitality industry is one of those hardest hit by the pandemic, with many restaurants closed for most of 2020 due ever-changing restrictions, and thousands of staff furloughed or even left unemployed due to the impact on businesses.

Despite re-opening in July, with strict social distancing measures and the introduction of the rule of six, the government’s tier measures introduced in October forced many to close once again. 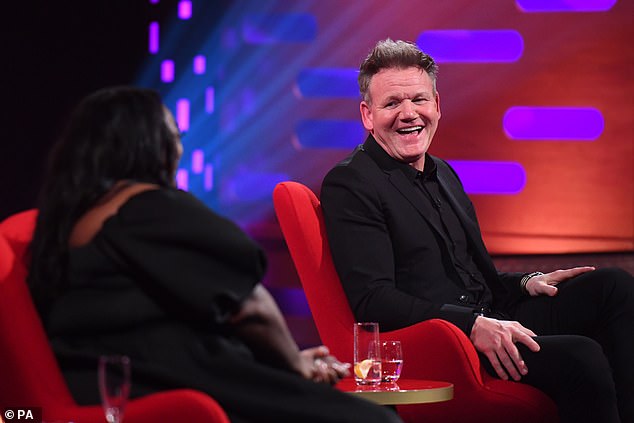 Upsetting: He admitted that thousands of bookings across his business were removed when Tier restrictions in December forced many restaurants to close yet again

In November the entire country was placed in another lockdown, forcing all hospitality business to switch to takeaway or delivery only, and some were open for just days in December before being ordered to close once again.

Kate Nicholls, chief executive of UKHospitality, told Radio 4’s The World At One that if the reopening of the sector was delayed until May, 3.2million could lose their jobs.

Just one in five hospitality businesses are confident that they will have enough cash to get through beyond March,’ she said. ‘There is no way that businesses will be able to survive until May with no revenues coming in for seven months.

‘It’s a cash burn of half a billion pounds to keep the sector closed each and every month. If we are forced to wait for a longer period then unfortunately there will be little left of the hospitality sector and the 3.2million people who work in it to reopen at that point in May.’

She said she hoped that with the vaccination programme under way, there would be a ‘pathway’ to the lifting of restrictions. 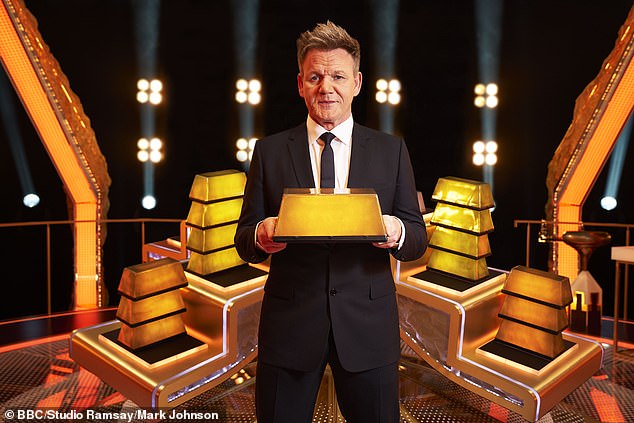