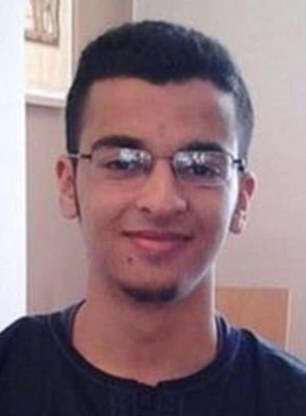 The Manchester Arena bomber’s brother Ismail Abedi posted extremist images and Islamic State propaganda on social media before the attack, the inquiry into the bombing has heard

The Manchester Arena bomber’s brother posted extremist images and Islamic State propaganda on social media before the attack, the inquiry into the bombing has heard.

Families of the 2017 atrocity’s victims have criticised MI5’s ‘obsessive secrecy’ over the public investigation, as families were told no members of the security service would be scrutinised in public.

MI5 checked the Facebook account of Ismail Abedi, now 27, in July 2015, when agents found a series of photographs of him posing with weapons, the public inquiry into the terror attack heard.

John Cooper, Q.C., representing families of 12 of the 22 victims, said the account contained ‘images of Ismail Abedi holding a rocket propelled grenade launcher and sitting on an anti-aircraft gun’.

He was also depicted holding a machine gun.

Photographs were imprinted with the logo of the Islamic State terror group, Mr Cooper said.

Two months later in September 2015, Ismail was detained by border officials when entering the UK, his phone was seized and its contents downloaded. 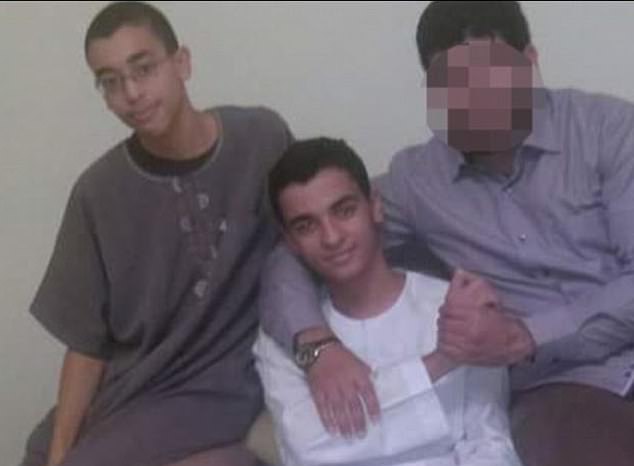 Hashem Abedi, Salman and Ismail’s younger brother who built the Manchester bomb, was found to have used it.

Mr Cooper said: ‘The phone was apparently used by both Hashem and Ismail.’ Islamic state recruitment videos and literature were found on the phone, he added.

He said: ‘The Abedi family was known to the Security Services, and what was known about the brothers should have been analysed in the wider knowledge of what their father and other known associates had been and were involved with and in some cases promoted on social media. 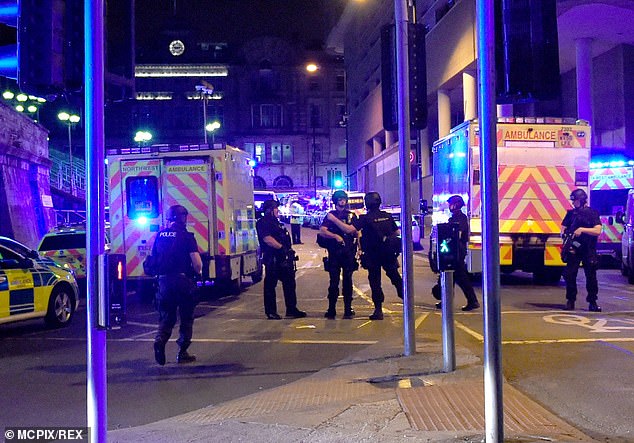 Who are the Abedi’s?: The family who refuse to co-operate with an inquiry into the murder of 22 innocent people

He helped build the bomb which his brother detonated at the concert.

Manchester-born Abedi was in Libya when the bomb went off and was arrested there and extradited to the UK.

Prior to the attack, the college drop-out, who worked as a takeaway driver,  started asking the owner of the restaurant he was working for if he could take the metal vegetable oil cans away for scrap.

Hashem and Salman started using them to test homemade explosives they were experimenting with at their property on Elsmore Road, Manchester.

Hashem was jailed for life, with a minimum term of 55 years, after being convicted of 22 counts of murder.

He has refused to co-operate with the inquiry.

The father of the pair responsible for the Manchester Arena bombings is a Libyan-British national who fought against the Gaddafi regime in with  militant group Libyan Islamic Fighting Group (LIFG) – which was designated a terrorist organisation by the US, according to the Guardian.

He was arrested in Libya alongside Hashem, but was released without charge.

In Manchester, Ramadan, worked as a security officer,  and was assigned the role of muezzin at Didsbury mosque and calling out prayer five times a day.

In 2011, Ramadan he travelled back to Libya to fight in a civil war, reports the Guardian.

Shortly before he was arrested in Libya in 2017 he ‘condemned’ terrorist attacks on civilians.

He still lives in Libya and has refused to co-operate with the inquiry.

Samia Abedi is the mother of the brothers involved in the Manchester Arena bombing.

Little is known about her background, other than that she lived with Ramadan in south Manchester for more than a decade and that all of the pair’s children were enrolled in schools in the UK.

She is known to have left the UK in 2016, though continued to receive tax credits, child and housing benefit of about £550 a week, even though she left the UK for Libya in October 2016.

She still lives in Libya and has refused to co-operate with the inquiry.

Little is known about Joamana Abedi, the sister of the pair involved in the Manchester Arena bombings.

The 21-year-old is known to be living in Libya and has refused to co-operate with the inquiry.

In 2017, she gave an interview after the attack in which she described her brother as ‘kind and loving and that she was surprised by what he did.

She said he may have carried out the attack because he wanted revenge for US air strikes on Syria.

The eldest of the brothers, Ismail Abedi still lives in the UK.

He has previously apologised for the actions of his brothers.

In an interview with Sky News  he said he had ‘no idea his brothers had taken this path’.

‘I want to apologise on behalf of my family to the victims, for all the pain Hashem and Salman caused,’ he said.

On his brother’s life sentence, Ismail, who has a wife and child, added: ‘I’m glad this has happened because I can put it all behind me, get on with my life and look after my family.’

He is claiming legal privilege in relation to the inquiry.

‘It is now acknowledged that Ramadan Abedi was not only a malign influence on his sons but he is also designated as a suspect in the bombing.

‘Ramadan Abedi was connected to the Libyan Islamic Fighting Group (LIFG) and had posted pro al-Qaeda material on Facebook.

‘He had high profile associates connected to al-Qaeda.’

Mr Weatherby told how Ramadan Abedi’s friends reportedly included Anas al-Libi, a fellow member of the LIFG which was affiliated to al-Qaeda and was said to be behind an attempt to assassinate Libyan president Colonel Gaddafi in the 1990s.

Al-Libi became a key lieutenant of Osama bin Laden and was accused of masterminding al-Qaeda bomb attacks on US embassies which killed 224 people. He was eventually captured by American forces and died in custody.

Mr Weatherby said: ‘Ramadan Abedi posted a photograph of him on Facebook referring to (al-Libi) as a ‘lion’.’ The inquiry heard that when stopped by counter terrorism police on leaving the UK to travel to Libya with his sons in 2011, Ramadan claimed he was taking aid to Libya including medical supplies to rebels.

He added that 16 other known extremists were reportedly living within a 2.5 mile radius of the Abedi family’s home in south Manchester.

‘How many of those 16 knew the Abedis and how?’ Mr Weatherby asked.

Despite the family’s Islamist links, no members of the family were referred to the Prevent counter terrorism programme, the inquiry heard.

Contact included unsupervised prison visits, one lasting 90 minutes. Another visit, in January 2017, coincided with Hashem arranging purchase of sulphuric acid for the bomb.

‘What exactly were the Security Service doing when all this was happening?’ Mr Cooper asked.

Further questions by the families include how the Abedi brothers were able to buy large quantities of chemicals for the bomb without an alert being triggered, and why they repeatedly travelled unchallenged between the UK and war-torn Libya.

An MI5 investigation into Salman Abedi was briefly opened then closed in 2014.

Relatives of one victim, Lisa Lees, were ‘incredulous’ Salman was allowed into the UK without close scrutiny.

Mr Cooper said: ‘The families we represent are requiring this inquiry to rigorously question the security services upon their state of knowledge, not only of Salman Abedi but those clearly closely associated with him and what actions were taken.’

Duncan Atkinson, Q.C., representing seven families, said Salman Abedi had ‘hit a priority indicator’ with MI5 by March 2017 due to information received the previous year but the process ‘had not been taken further’.

Counsel for the families called for security service agents to give evidence in public.

Only one MI5 witness – a deputy director general – is scheduled to be questioned with the families’ lawyers and chairman Sir John Saunders present.

In the final report, a classified chapter on security service failings will be given to the Home Secretary.

Mr Weatherby told how his clients had ‘grave misgivings’ about the ‘obsessive secrecy which surrounds the security services section of evidence’.

He said: ‘The current position essentially removes the whole of a central issue from public scrutiny’.

Mr Cooper said: ‘These questions should be in an open forum, transparent and accessible to the families.

‘Just where were the security services in all this?’ Mr Weatherby added: ‘To bring secrecy does not protect national security – it does the opposite. It protects failure.’

The inquiry also heard concerns from lawyers for victims’ families that ‘penny pinching’ by organisers and security contractors at the fateful Ariana Grande concert may have led to ‘underwhelming’ security and medical provision.

Guy Gozem, Q.C., representing three of the families, accused them of ‘putting profit before safety’.

The concert was deemed a ‘low risk’ by arena bosses although the UK security threat was ‘severe’.