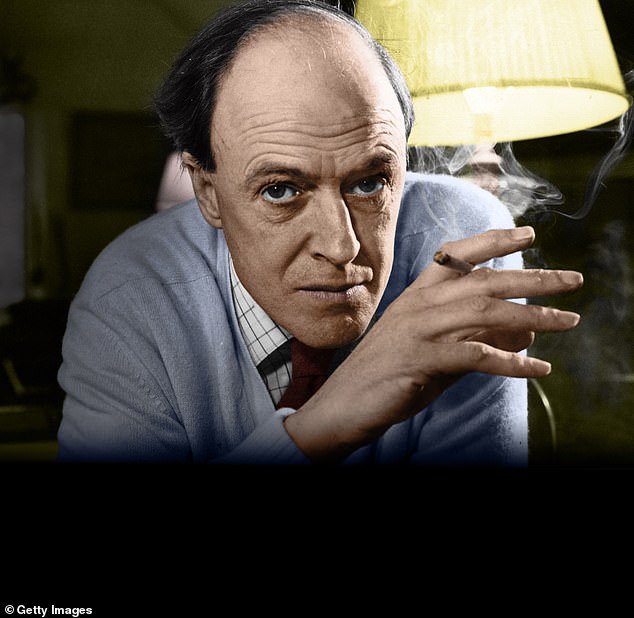 He was the 20th century’s most famous storyteller renowned for classics such as James And The Giant Peach and Charlie And The Chocolate Factory.

However, despite his popularity among children, Roald Dahl had a darker side to his character — and rarely seen correspondence with his publisher Tom Maschler has surfaced which confirms his reputation as one of English literature’s most notoriously spiky authors.

Dahl makes a series of grumpy complaints about success and money, drinking too much and his own laziness.

In one nine-page letter, which is being sold for £3,000 by bookseller Peter Grogan, he moans about being hounded by his fans at his home.

Despite his popularity among children, Roald Dahl had a darker side to his character — and rarely seen correspondence with his publisher Tom Maschler has surfaced which confirms his reputation as one of English literature’s most notoriously spiky authors

‘This house is becoming a place of pilgrimage . . . ‘Vee are from Holland. Vee haff come to look at your house.’ ‘

He also frets about relations with his publishing house Jonathan Cape while Maschler is away: ‘I [have] no one there to talk to any more.’

At least sales figures for Matilda — and plans to turn it into a musical — were keeping him buoyant: ‘Four nice intelligent men came down here to lunch last week to talk about a [musical]. They are mad keen and they’ve got the money to do it.

‘There’s so much going on in the film world with the children’s books I can’t keep up with it.’

Another brief letter from 1983 thanks Maschler for a party invitation: ‘Everyone had a good time, especially Francis Bacon. It was a fine sight seeing young Lucy [Dahl’s daughter] bullying him into our car at the end — ‘Get in, man! Pull yourself together and just do as you’re told!’ ‘ 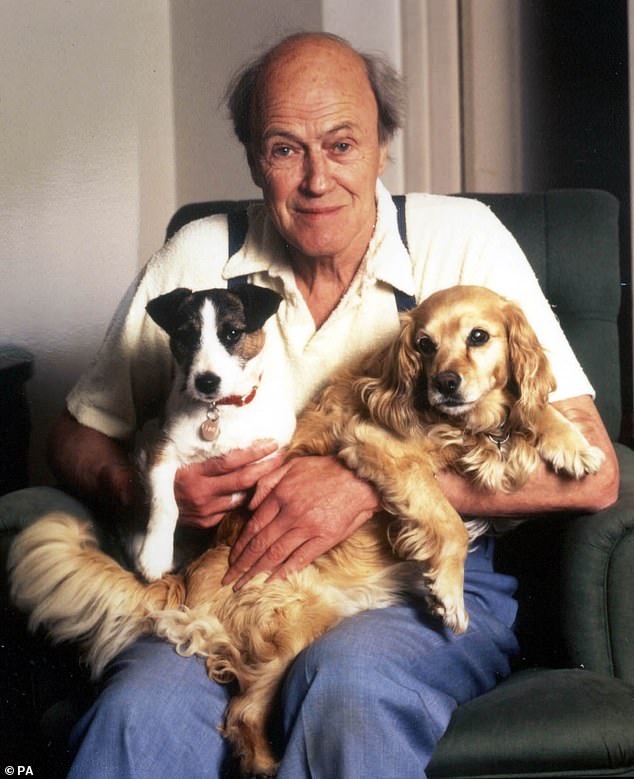 Dahl makes a series of grumpy complaints about success and money, drinking too much and his own laziness

The earliest letter — to Maschler’s daughter Hannah — apologises for a delay in producing a new book: ‘The trouble is I am getting a bit lazy, and I have my orchids to look after and sometimes I drink too much whisky so I can’t work.

‘But now you have made me feel guilty and so I think I had better pull up my socks and pick up my pencil and get down to it once again.’

Last month the writer’s family issued an unprecedented public apology for his anti-Semitism on the author’s official website.

As the health-conscious embark on New Year diets, even fitness guru Joe Wicks admits to some calorific weaknesses.

‘Marmalade on toast is my secret vice,’ he says. ‘Some days I can’t help having some just before bed. I need at least four slices to be satisfied, though.’

Joanna Lumley can remember a time before she became famous as Purdey in The New Avengers when she had to count the pennies and live ‘hand to mouth’ just like her character in new ITV drama Finding Alice.

‘When you are looking through your handbag and you hadn’t got any money, then suddenly you think, ‘Do you know, I think there might be something at the bottom?’ And you’d find a ten shilling note.

You’d go, ‘This means I can buy some bread or take a taxi home.’ It never quite stretched to going to a launderette, so I still washed my sheets in the bath.’

Fancy living at the Queen’s Scottish retreat? Balmoral is advertising for a chef, who could have accommodation on the royal estate.

It seeks a seasonal cook for its restaurant, which is due to open in April. The 50,000-acre estate normally attracts tens of thousands of visitors before the Royal Family arrive for their annual summer holiday in July.

‘We are looking for an enthusiastic chef with experience and energy to join our team,’ says the advert. ‘You must be confident in the preparation and cooking of fresh seasonal ingredients with strong work ethics and attention to detail.’

‘This is a busy kitchen with 200+ covers per day. The role will involve weekends and occasional evening/outdoor functions. You must thrive under pressure.

‘Excellent food knowledge and safety awareness are essential, but we are interested in your personality and potential, too. Accommodation is available if required.’ 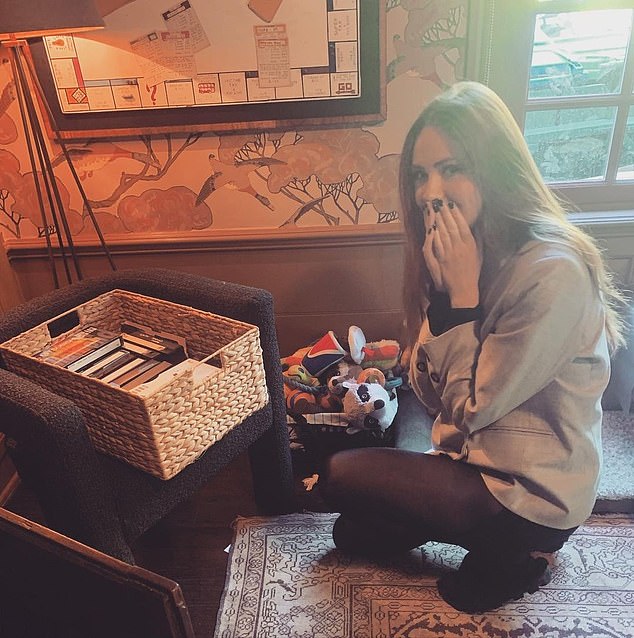 She shot to fame playing the Time Lord’s assistant Amy Pond in Doctor Who, and now actress Karen Gillan is travelling back to her own past — by buying a VHS tape player to revisit her childhood

She shot to fame playing the Time Lord’s assistant Amy Pond in Doctor Who, and now actress Karen Gillan is travelling back to her own past — by buying a VHS tape player to revisit her childhood.

Sharing this picture of herself at home in Inverness, the 33-year-old Scot says: ‘I’ve just purchased an old-school VHS player and found all my childhood videos. Get ready for some content gold.’

Explaining the Monopoly board on the wall next to her, the daughter of singer Raymond Gillan adds: ‘That’s an art piece made by my dad.’

Pippa Middleton’s brother-in-law, reformed lothario Spencer Matthews, might have a wayward past, but it pales in comparison to his wife, TV presenter Vogue Williams, who admits to a violent streak as a youngster.

‘I got thrown out of my house for about a year. I had to go live with my dad because I was so bold and I kept getting suspended from school,’ says the 35-year-old, who stands accused this week of breaking the Government’s rules on travelling by holidaying in St Barts (pictured).

Vogue grew up in Dublin with brother Fredrick, sister Amber, and parents Sandra and Freddie before they separated when she was seven.

Mum-of-two Vogue, who wed the Eton-educated Made In Chelsea star, 32, at his family’s Glen Affric estate in Scotland in 2018, revealed another story from her childhood: ‘I remember once it was Amber’s birthday party and I was jealous so I started having meltdowns. I got a plank of wood and I hit her across the face with it.’ 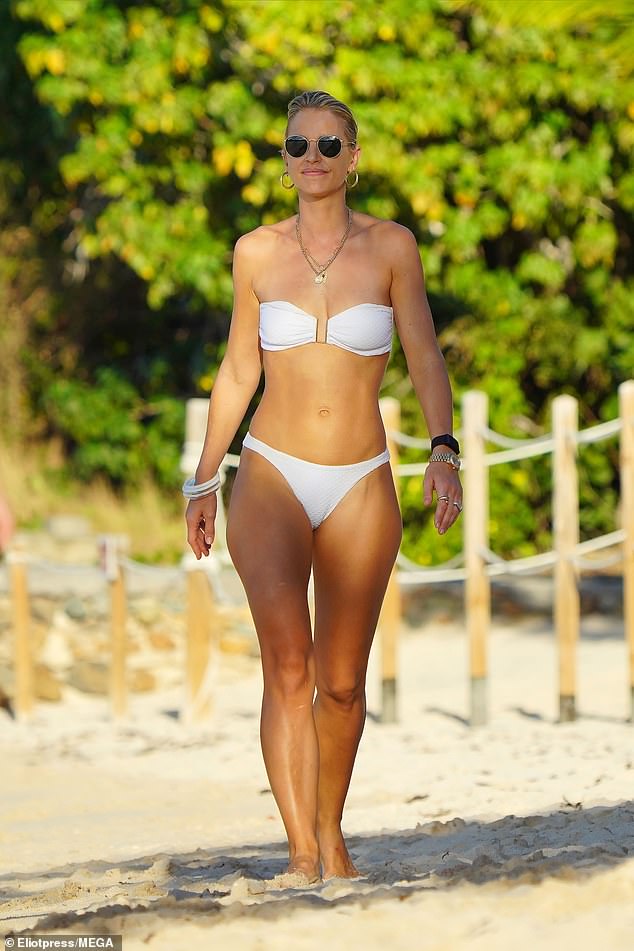 Pippa Middleton’s brother-in-law, reformed lothario Spencer Matthews, might have a wayward past, but it pales in comparison to his wife, TV presenter Vogue Williams, who admits to a violent streak as a youngster

She might have an extensive wardrobe, but clothes horse Naomi Campbell insists it takes her no time to get ready.

Drama is not confined to the screen for Prince Andrew’s Ladies Of London TV star pal, Caroline Stanbury.

Just days after announcing her engagement to former Real Madrid footballer Sergio Carrallo, 26, she reveals she’s been struck down with coronavirus.

‘I don’t know how I got it. I feel like I’ve been hit by a truck,’ says the 44-year-old. ‘My arms hurt, my throat hurts, my head hurts, my eyes are watering.’ The mother-of-three, who lives in Dubai, adds that although Sergio has tested negative, he has to quarantine for ten days.

‘He’s miserable,’ she adds. ‘But he’s decided we may as well sleep together. He’s home-schooling and cooking.

‘I’m teaching him to get the food for the kids from the freezer the night before. It’s quite full-on for someone who hasn’t done anything like this before.’

Lockdown proved a boon for former EastEnders actress Tracy-Ann Oberman. ‘I managed to get Kenneth Branagh, Daisy Ridley and Adrian Lester for my radio play That Dinner Of ’67, about the making of the movie Guess Who’s Coming To Dinner,’ she tells me.

‘They were all free because of Covid.’ The play, on BBC Sounds, is open to screen offers. Will Netflix steal the BBC’s dinner? 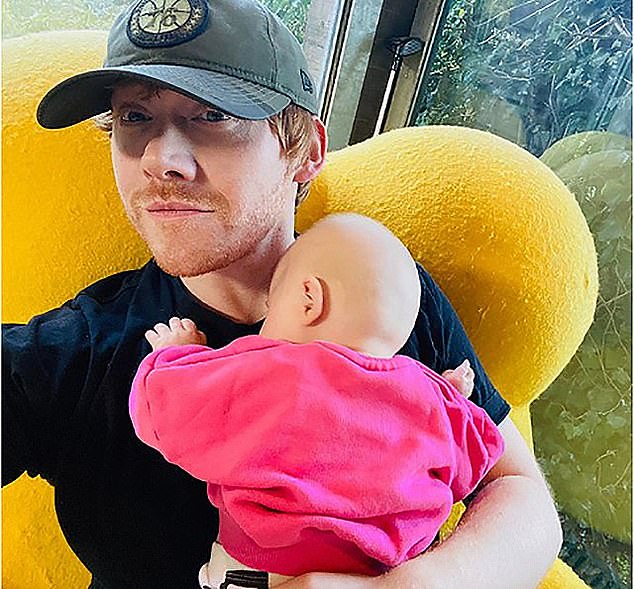 ‘It was stressful,’ admits Grint, 32, who played Ron Weasley in the hit films. Girlfriend Georgia Groome gave birth to their daughter, called Wednesday, last May.

‘Obviously, expecting a baby is pretty stressful in a normal situation but it was in the middle of [the first] lockdown and it was quite isolating when you need as much support as you can get from family. We didn’t have that for a long time.’