No surfer ever had a wilder ride. A member of the U.S. Coast Guard, in full combat gear, is hammering furiously on the hatch of a semi-submerged small submarine, clinging desperately to its stubby conning tower as it surges at top speed through the Pacific off the coast of Colombia.

The brave American seaman has already risked his life jumping on to the sub from a high-speed pursuit boat. One slip could be fatal as waves crash over the the fibreglass deck of the violently pitching vessel. Its crew, peering furtively through the narrow cabin windows, have ignored demands to stop and, given the preciousness of their cargo, are making a run for it. However, with boats shadowing them on either side, they clearly realise that resistance is futile.

As other members of the Coast Guard train their guns on the hatch, it opens and hands appear, raised in surrender. Also surrendered is the cargo — more than 17,000lb of cocaine worth a staggering £180 million in large waterproof plastic-wrapped bales.

As for the form of transport, this will be yet another addition to the growing fleet of ‘narco- submarines’ confiscated by law enforcement and anti-drug authorities worldwide.

Arguably the most ingeniously effective tool yet developed by international drug traffickers, these specially designed and secretly built subs — to be accurate most of them are semi-submersibles as a few feet of their hulls remain above the water — cost at least $1 million to build.

But they can make their South American owners many times more than that when used to carry vast consignments of high-grade cocaine between continents with a very low probability of detection.

While an estimated 39 subs were captured last year on their major routes up the Pacific to Central America and the States, or across the Caribbean and Atlantic to East Africa and Europe, experts say far more get through than are ever apprehended.

A few days ago, the Colombian navy netted one such sub carrying more than two tons of cocaine — worth an estimated £50 million — 35 miles off the country’s coast.

Some 30 metres long and powered by three outboard motors, its three Latin- American crew were en route to Mexico where officials believe the drugs would have been taken on by land to the U.S. The sub is understood to have belonged to a breakaway faction of Colombia’s infamous Farc rebel guerrilla group. 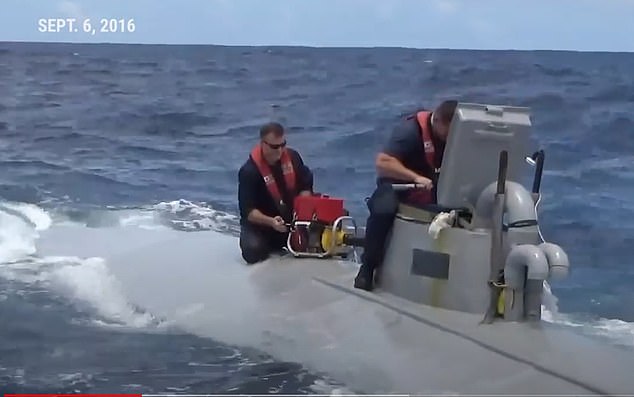 Narco-subs aren’t a new phenomenon — they have been sneaking Colombian cocaine north up the Pacific since the early 1990s — but design and construction improvements are allowing them to sail far further afield.

Last November, acting on a tip-off from British authorities that an unidentified vessel was crossing the Atlantic with a payload of cocaine, Spanish police found a large, carbon-fibre narco-sub close to shore in Galicia, North-West Spain.

The 66ft-long vessel, powered by a 2,000 horsepower engine, had made the epic 6,000-mile journey down the Amazon from Colombia, which produces more than 70 per cent of the world’s cocaine, and out through Brazil into the Atlantic.

Its exhausted, famished and severely dehydrated three-man crew later told police that the storms along the Spanish coast had prevented the cocaine being offloaded on to speedboats.

So the vessel’s captain, a Spaniard who had only recently completed a yacht skipper’s course, headed north. However, after six days and with diminishing food supplies, the crew gave up waiting for the drug gang to arrive.

Drug bosses pay boat engineers and designers, including recruits from Russia, Pakistan and Sri Lanka, handsomely to oversee the mass-production of the subs in factories that are little more than giant sheds hacked out of remote corners of the Colombian jungle

They scuttled the sub in shallow water just 100 yards from the shore, hoping to salvage the drugs later. Instead, they were apprehended by police as they emerged from the water. The officers recovered 152 bales of cocaine weighing three tons. Experts estimated the carbon-fibre sub, capable of making repeated transatlantic trips, would have cost £2.3million to build.

International anti-drug trafficking officials described the discovery of this long-distance narco-sub as a ‘game changer’ — the lucrative European market in illegal drugs is now being targeted by the cartels.

Drug bosses pay boat engineers and designers, including recruits from Russia, Pakistan and Sri Lanka, handsomely to oversee the mass-production of the subs in factories that are little more than giant sheds hacked out of remote corners of the Colombian jungle. 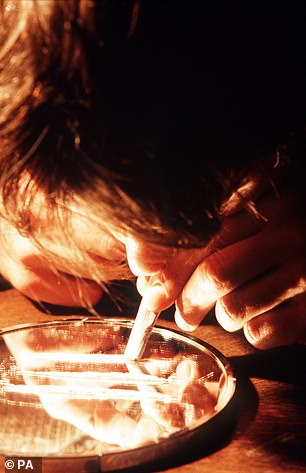 The typical narco-sub is about 45ft long, built of fibreglass over a marine plywood frame and weighs seven tons. It’s capable of carrying 1.6 tons of cocaine at a steady speed of 10 knots for thousands of miles without refuelling

For years, these factories were concentrated in a poor and inaccessible region near the Pacific coast port of Buenaventura, once known as Colombia’s deadliest city, where prying eyes are kept away by paramilitaries.

Raw materials are brought in from the city of Cali — capital of the cocaine business — by motorboat. Over the years, the design of the subs has been tweaked to improve hydrodynamics and cocaine capacity.

They generally fall into four categories — distinguished by whether they have inboard or outboard motors, whether they are shaped like narrow power boats or even thinner shards reminiscent of sculling boats.

The typical narco-sub is about 45ft long, built of fibreglass over a marine plywood frame and weighs seven tons. It’s capable of carrying 1.6 tons of cocaine at a steady speed of 10 knots for thousands of miles without refuelling. When laden, three-quarters of the hull is underwater.

The subs are camouflaged with dark grey or blue-green paint which makes them almost invisible to spotter planes. And, when filled to the gunwale with cocaine, only the small cockpit is visible above the water — equally hard to spot from above or other vessels. It also makes them very difficult to pick up on radar.

An exhaust system funnels the hot fumes generated by the engines down into the water so they don’t show up on thermal detection equipment. And during the day they travel slowly to limit the amount of wake they create. The narco-subs are essentially designed to evade detection rather than outrun pursuers — and it works. If the authorities ever actually locate them on the ocean, it’s either thanks to a tip-off or sheer luck.

Traditionally, the submarines are scuttled after each trip and their crews fly home. The smugglers, often poor fishermen rather than hardened criminals, call the subs ‘water coffins’ or ‘tombs’ and compare — with justification — a narco-sub trip with a journey to hell.

Each sub has three or four crew members (one or two to steer and navigate, one to look after the engine and another the cargo) who share a space about 10ft by 10ft — ‘hotbunking’ with two sleeping on mattresses on top of the petrol tanks while the other two steer the vessel with a conventional ship’s wheel and monitor progress. It’s intensely claustrophobic — they either relieve themselves on board or through the tiny cabin windows — and intensely hot. The powerful and deafeningly noisy diesel engines are just a few feet away at any time (along with thousands of gallons of fuel), taking the cockpit temperatures to almost unbearable levels. During their perilous voyages, which last eight to ten days, the crew live off canned food, crisps, bottled water and the very occasional gulp of fresh air. But the money makes the hardship and the danger worthwhile, earning each crew member £10,000 a trip.

It’s impossible to say how many of these narco-submariners die on the job. A former drug trafficker who once watched a crew preparing to leave on a sub said that after their bosses treated them to a hearty final meal, the crew commended themselves to their patron saints and prayed.

‘To me, it looked like a kamikaze ritual,’ he said.

Even so, enough get through to make it worth the cartels’ while and the subs are getting ever bigger and more sophisticated.

In August, the Colombian navy found a 100ft narco-sub in a jungle hideaway that was just 10ft wide. And there are likely to be even bigger ones out there that have simply never been found.

In 2000, a Russian-designed narco-sub was found in a workshop hundreds of miles from the sea in central Colombia that, at 120ft long, was capable of transporting vast quantities of cocaine.

With a steel pressure double hull it was fully submersible — a proper submarine with a periscope.

Full submersibles such as that are, of course, even harder to locate. However, they have disadvantages. They are more expensive and complicated to build and too tricky for fishermen with basic skills to operate.

However, now that the semi-submersible variety of narco-sub has proved itself more than adequate for the transatlantic journey to Europe, the cartels are expected to capitalise on the opportunity.

For all anyone knows, they may be here already — as sinister a presence as the Nazi U-boats once were.