By Rebecca Camber for the Daily Mail


A technology partnership between Britain and China is to be shut down amid national security fears about sharing nuclear secrets.

Former chancellor George Osborne announced with great fanfare in 2015 that the UK’s National Nuclear Laboratory would work with the China National Nuclear Corporation (CNNC) in the development of technology.

The Joint Innovation and Research Centre was unveiled in Manchester with an initial pledge of £25million in Government cash. Another £25million was stumped up by the Chinese government to fund the laboratory.

But the Mail has learnt that the £50million research hub is due to be scrapped in the coming weeks after Business Secretary Kwasi Kwarteng became concerned about risks to national security.

It comes after MI5 voiced increasing concerns about such partnerships with China. It was announced by Mr Osborne during his notorious trade mission to Beijing in September 2015 when he said Britain should ‘run towards China’, in what he predicted would be ‘a golden decade for both our countries’.

Six years on, the notion of sharing technology in such a sensitive area with a hostile state has been described as a ‘colossal mistake’.

The hub was designed for the ‘development of joint technology in areas such as advanced reactors, fuel, manufacturing, decommissioning, waste treatment and digital reactor technology’.

The National Nuclear Laboratory had said it would ‘incorporate projects on a number of different areas of work across the whole nuclear fuel cycle’ and establish relationships with ‘key UK universities working in the nuclear sector’. 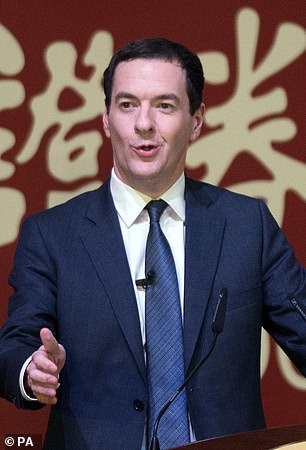 It was announced by Mr Osborne during his notorious trade mission to Beijing in September 2015 when he said Britain should ‘run towards China’, in what he predicted would be ‘a golden decade for both our countries’

The research deal, signed off in 2016 by then energy secretary Amber Rudd, was initially agreed for a five-year term and the centre was unveiled that year.

The deal made during David Cameron’s government was one of a raft of partnerships between the two nations. But a rise in concerns over China’s domestic and foreign policies has forced ministers to reassess a number of deals with Chinese state-backed companies.

Last year the Government banned Chinese firm Huawei’s involvement in the 5G wireless network, with its kit to be removed by 2027, due to security concerns. And the US put the CNNC on a blacklist over alleged links to China’s People’s Liberation Army.

Yesterday an intelligence source said: ‘The partnership was a red flag security risk and exactly the type of project we should be bringing to an end.

‘It’s baffling as to how this got through at the time but in the current climate it’s a national security issue.’

An announcement about the closure is due to be made in the coming weeks but the Mail has learnt that all joint work has already been suspended, partly due to the pandemic.

Former Tory leader Iain Duncan Smith said: ‘George Osborne has become a chief apologist for the mistakes of what was naively described as the golden era of relations that allowed the Chinese government into British technology, making us more dependent on an autocratic government which practices genocide on its own people.

‘When did it dawn on them that this was a colossal mistake? What worries me is that we now have a dependence on the Chinese in our nuclear industry.’

Research by the Henry Jackson Society think-tank last year found that in 57 areas of critical national infrastructure, the UK is dependent on goods from China. Yesterday a Department for Business, Energy and Industrial Strategy spokesman refused to comment.