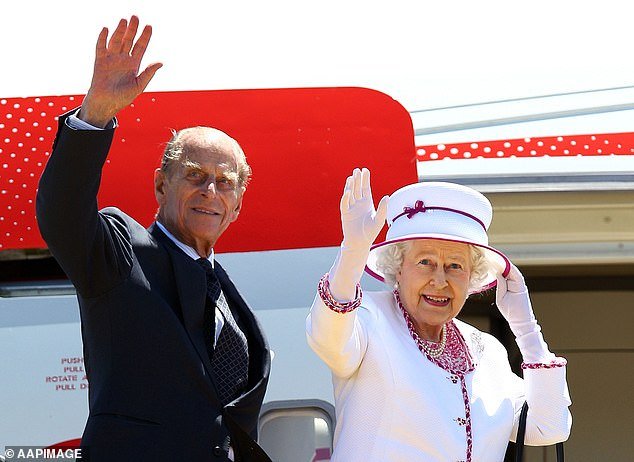 A petition calling for a statue to Prince Philip following his death yesterday aged 99 has already been signed by thousands of people.

Save Our Statues launched a change.org campaign calling on Boris Johnson to erect a monument to the Duke of Edinburgh in London.

The page has been signed more than 4,000 times since it was set up last night and heartbroken signatories left tributes to the Queen’s husband.

Thousands of people have signed the petition for a permanent memorial to the Duke of Edinburgh, who died yesterday at 99

He was the nation’s longest serving consort and passed away in his private apartment just two months and a day before his 100th birthday.

The Save Our Statues petition said: ‘The Duke of Edinburgh served our country for 78 years, serving 13 in the Royal Navy and then 65 as Britain’s longest serving consort, including 22,000 engagements and supporting 780 organisations.

‘We say there should be a prominent statue of the Duke in London to recognise the above, as well as his great personal dedication and support to Her Majesty the Queen.’

Thousands of supporters signed the petition – which has a target of 5,000 – and many left a tribute to the late Prince.

One wrote: ‘Prince Philip embodied true service, by which I mean he dedicated his life to it in spite of it being against his very instincts.

‘There is no higher ideal of service, and we as a nation cannot afford to let such sacrifice go unhonoured.’

Another put: ‘It goes without saying that such a long serving, prominent member of the Royal Family of the greatest country in the world should have a statue.’

One woman posted: ‘I want the Duke of Edinburgh to be remembered with a fitting tribute to the man, the environmentalist, the longest serving consort, the oldest public servant and a very funny decent man.’ 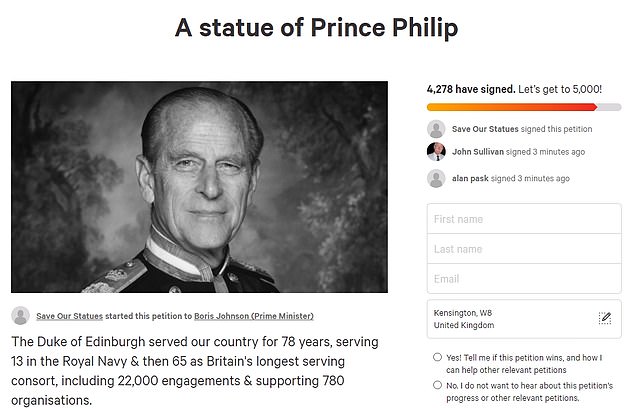 The online petition has already been signed by more than 4,200, less than 24 hours after it was set up in his honour

Another commented: ‘He dedicated his life to Queen and Country. Stood by his family and devoted his life to Our Majesty Queen Elizabeth, his interest in the world industry and helping the young see there strengths through the Duke of Edinburgh was amazing.

‘Stand easy Sir and fly high with the Angels, may our Majesty and the family stay strong and find the courage over these next days weeks and months ahead. We Salute you.’

A man said: ‘Prince Philip was, like Her Majesty, utterly devoted to his duty and the country.’

He added: ‘He is a shining example for our youth and should be immortalised by a statue.’

Another wrote: ‘Definitely deserves a well placed statue in memory of a man who served this nation well!’

And one more added: ‘I think this is an excellent way of paying tribute to a wonderful gentleman who has served this country well since 1939.

‘He saw military action in the Royal Navy during WW2 and has been an amazing Consort to Her Majesty The Queen all these years.’ 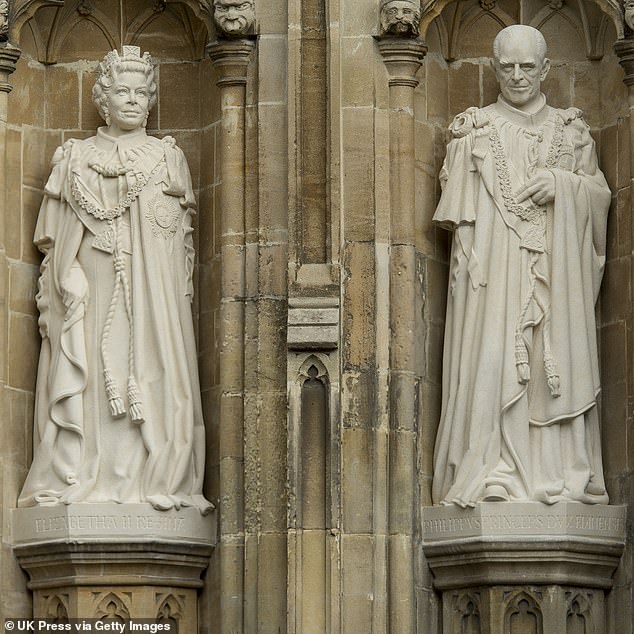 The Duke had a statue erected for him and the Queen at Canterbury Cathedral in 2015.

Her Majesty unveiled the stone carvings – made to mark her Diamond Jubilee – by sculptor Nina Bilbey, 47, from Wells-next-the-Sea, in Norfolk.

They stand near two statues of Queen Victoria and Prince Albert – the only other monarch to reach a Diamond Jubilee – next to the West Door of the building.

Ms Bilbey posted a picture of the monuments she made on her Instagram yesterday after it was announced Prince Philip had died.

She wrote: ‘My statues of the Royal pair on Canterbury Cathedral 2015. He asked me if I had to leave lots of stone on behind the ears to help hold them up. RIP The Prince Philip Duke of Edinburgh.’

It comes after a day of mourning which included a gun salute which rang out around the world in honour of Prince Philip. 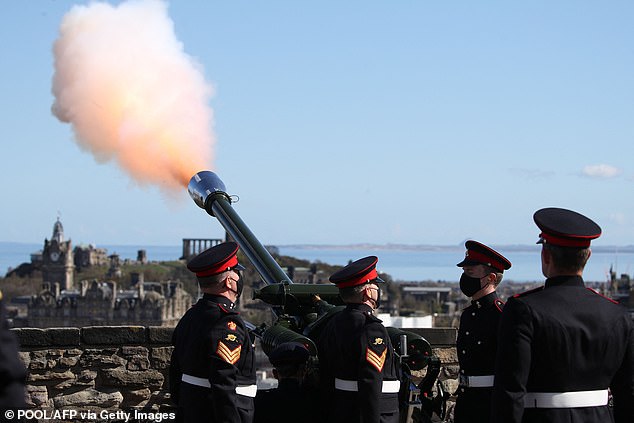 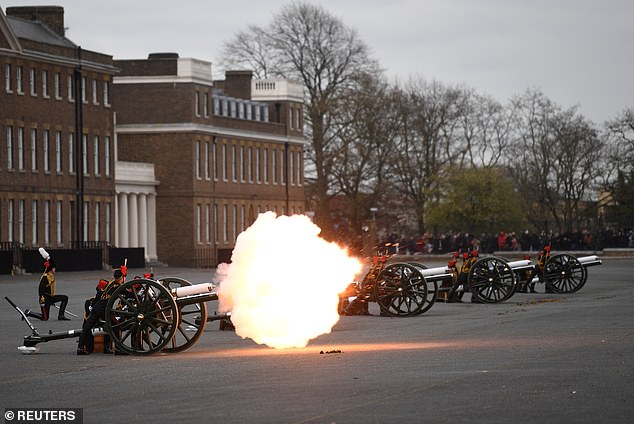 The Kings Troop Royal Horse Artillery also fired to mark the passing of Philip, at their historic Parade Ground, Woolwich Barracks. The same guns were also fired for Philip’s wedding to the Queen in 1947 and at her Coronation six years later in 1953

Royal Navy warships fired 41 shots over 40 minutes from midday in unison with batteries across the UK and Gibraltar after similar events in his beloved Commonwealth.

Crowds gathered on Tower Bridge to watch members of the Honourable Artillery Company fire their cannons from the Tower of London as shots also echoed around the capital from the historic barracks seven miles away at Woolwich, finishing at 12.40pm precisely. 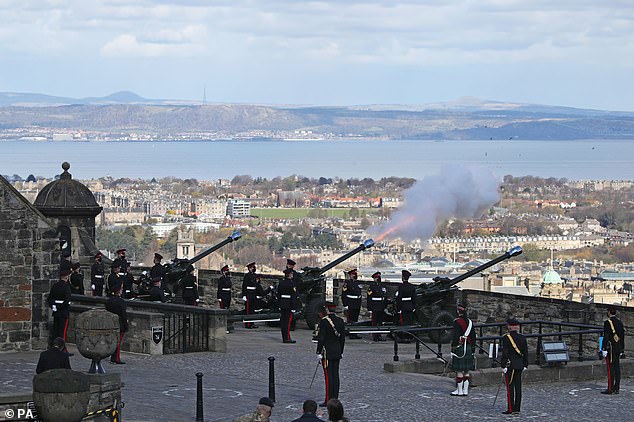 Members of the 105th Regiment Royal Artillery fired their 41-round gun salute from Edinburgh Castle, high above the Scottish capital 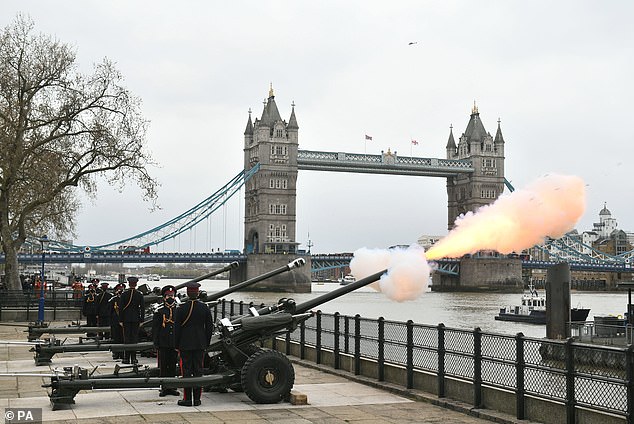 HMS Diamond, a 8,000-tonne destroyer dubbed ‘the jewel in the naval crown, set sail from Portsmouth on Friday with her flag at half mast and held its gun salute in the Channel in memory of the Duke of Edinburgh, a celebrated sailor and war hero.

The Kings Troop Royal Horse Artillery fired on the Parade Ground at the historic Woolwich Barracks using the same guns also fired for Philip’s wedding to the Queen in 1947 and at her Coronation six years later in 1953.

An artillery salute has already taken place at Parliament House in Adelaide this morning, with similar commemorations repeated across the Commonwealth.