Senior Tories including Theresa May have distanced themselves from a major party donor embroiled in a ‘cash for access’ row involving the Prince of Wales’s nephew.

Former prime minister Mrs May has stepped away from plans to become a patron of Mohamed Amersi’s Conservative Friends of the Middle East and North Africa (Comena), which he hoped would become an affiliate group of the party.

But he has become embroiled in a dispute with ex-MPs who run the Conservative Middle East Council, even threatening legal action over memos written about his background that claimed he had business ties to Russia.

And at the weekend he made the explosive allegation that party chairman Ben Elliot, whose aunt is the Duchess of Cornwall, had sold him access to Charles.

Mr Amersi revealed that he had been an elite client of Mr Elliot’s lifestyle management firm Quintessentially, and as a result had enjoyed a private dinner with the heir to the throne – later becoming a trustee of one of his charities.

He also told how the Conservatives operate a secretive club called the Advisory Board for top donors and that ‘one needs to cough up £250,000 per annum or be a ‘friend of Ben’ to gain admission.

The Times today revealed that Mrs May had reversed plans to become a patron of Comena if it became affiliated.

It came as Mr Amersi lashed out at the Conservatives’ treatment of him, saying he would have been treated better by the party if he had been white.

Mr Amersi said the Conservatives would have treated him better if he had a traditional English name and had been to Eton and Oxford.

The Kenya-born businessman and his Russian partner Nadezhda Rodicheva have between them given £793,000 to the party and senior MPs in recent years.

Mohamed Amersi (left) said the Conservatives would have treated him better if he had a traditional English name and had been to Eton and Oxford. (Pictured right, former Prime Minister Theresa May)

Ben Elliot (right), 45, is said to have introduced super-rich clients from his company Quintessentially to the Prince of Wales (left) 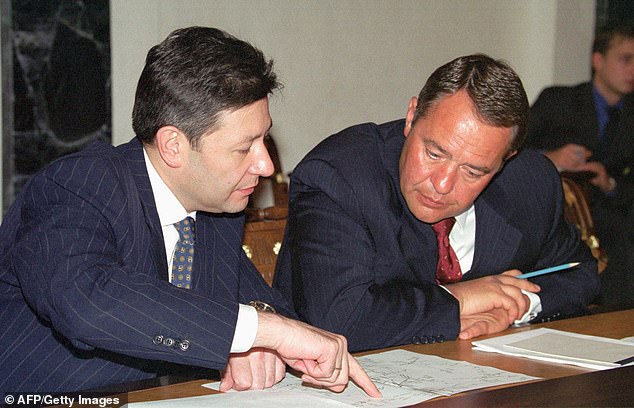 A Swiss tribunal ruled that First National Holding, which paid Amersi $4million, was one of a number of firms controlled by Leonid Reiman (left), who at the time was Russian telecoms minister.

‘I sometimes wonder if I was white and my surname was John Smith and I had been to Eton and Oxford I might have been treated differently. And I think there is some truth in that,’ he told the Daily Mail.

However he insisted that he loves the party and will continue to donate to it.

He also apologised to Prince Charles. ‘My intention was never to embarrass the Royal Family and particularly the Prince of Wales,’ he said.

‘I have the greatest respect for him and have witnessed his work first-hand round the world.’

There are now calls for the Tories to stop taking money from him. One senior figure said: ‘Donor money is being used to buy a position of influence.’

A party spokesman said: ‘The Conservative Party is the party of aspiration and opportunity for all, no matter your gender, your ethnicity or where you come from.’ 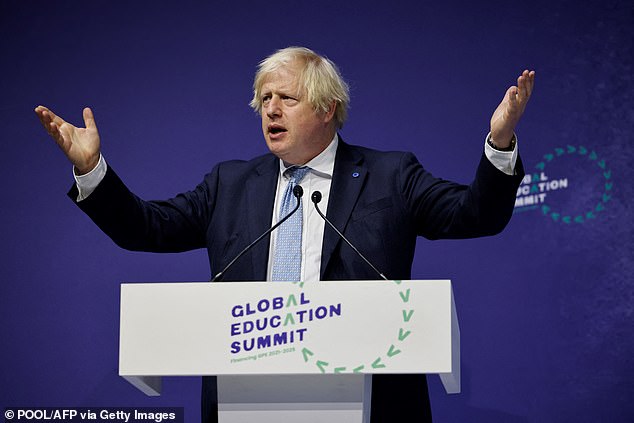 Last night Mr Amersi told the Daily Mail he believed he had been treated badly by the Tories because of his background. (Pictured, current Tory leader and Prime Minister Boris Johnson)

The party board is expected to consider Comena’s application for affiliation next month.

Labour chairman Anneliese Dodds said: ‘Ministers … must be beyond reproach, but instead it seems like a six-figure sum can buy you access to their offices.’

However Tory co-chairman Amanda Milling pointed out that Labour had taken £1.2million from the Unite union in the past year and is seeking cash from billionaires.

She wrote to Miss Dodds: ‘The Labour Party runs its own Chair Circle Membership group and the Rose Network whose members can pay a fee to get access to Sir Keir Starmer, yourself, and other senior Shadow Cabinet members.’

Yesterday it was claimed Mr Amersi was paid $4million by a firm he knew was controlled by one of Vladimir Putin’s ministers.

He received the seven-figure payment in 2005 for work carried out for Luxembourg company First National Holding when it took over a Russian rival.

The following year a Swiss tribunal ruled that First National Holding was one of a number of firms controlled by Leonid Reiman, who at the time was Russian telecoms minister.

Mr Amersi has said that he did not know Reiman ran the Luxembourg budsiness at the time, believing it to be owned by a Danish lawyer. But a British expert in telecoms today told the Financial Times that this is incorrect.

‘And in the same way, that meeting with Mohamed to discuss telecoms in St Petersburg — you’re not going to spend a lot of time talking about whether or not Leonid owns First National Holding. Because you know he does.’

Mr Amersi denied Mr Hatt’s claim, telling the FT: ‘I cannot speculate on what Mr Hatt may have known at the time but, for my part, it is untrue that I was aware of Mr Reiman’s concealed ownership of First National Holding, so I could not have possibly engaged in discussions about this.’