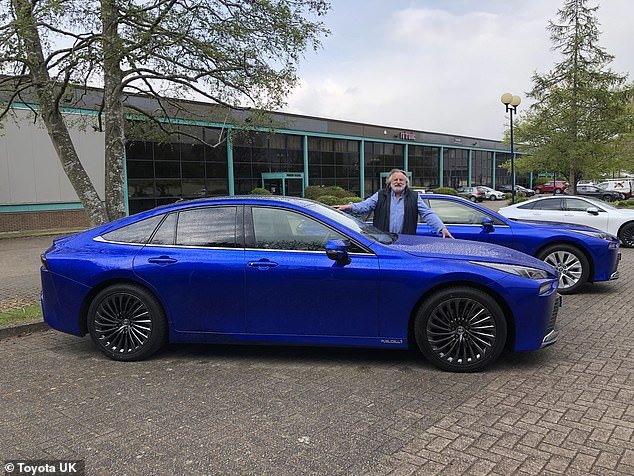 Because when I got behind the wheel of this sporty four-door five-seater saloon, that’s exactly what I was doing.

Except that in this case the ‘gas’ I was stepping on was not gasoline – or petrol as we call it in the UK – but lighter than air hydrogen: the most abundant element on the planet and probably the universe.

The new and surprisingly agile and sporty Mirai is the second generation of Toyota’s zero-emissions motor and the Japanese car-maker says improvements have helped it boost fuel economy by 10 per cent to achieve a 30 per cent increase in range to 400 miles.

And although hydrogen is the principle source of the power that drives it, the Mirai is actually an electric car driven by electricity and electric motors.

That’s because it uses a special fuel-cell which acts as a mini on-board power-station taking the hydrogen gas and, through a chemical reaction, creating electric power from the fusion of hydrogen from the fuel tank and oxygen atoms sucked in from the atmosphere.

The other by-product – as you may recall from school-days’ chemistry lessons, is H20 – otherwise known as water.

This is what dribbles out of the exhaust pipe – and is so pure you can drink it.

Indeed, the car is such a marvel, that it even purifies the air around it as it goes as the air it sucks thanks the on-board chemical reaction. 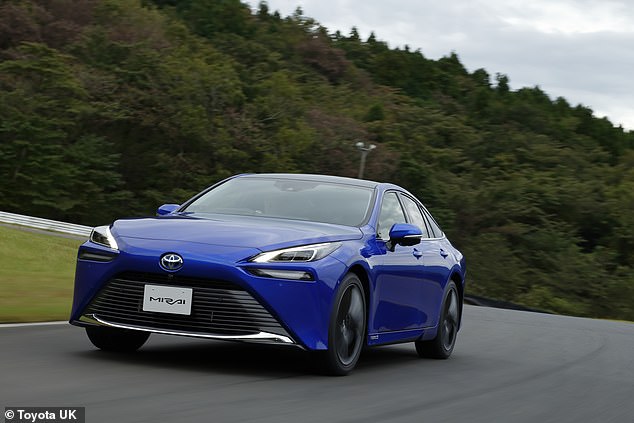 The new Mirai is the second edition of Toyota’s zero-emissions hydrogen fuel cell vehicle. The Japanese car-maker says improvements have helped it boost range to 400 miles

Just like a normal car actually – but a very decent one.

The Mirai’s coupe-like styling is eye-catching and clever. It looks like it’s a hatchback, but that’s actually a conventional saloon-like boot at the back.

It looks cool in a restrained way without resorting to the more sci-fi styling of the original Mirai. Its profile has something of the 1970s about it. In a good way.

Acceleration from rest to 62mph officially takes 9 seconds, however it feels much faster out of the blocks from a standing start thanks to the instant torque from the electric motor.

It’s nimble around roundabouts and is no slouch on dual-carriageways. 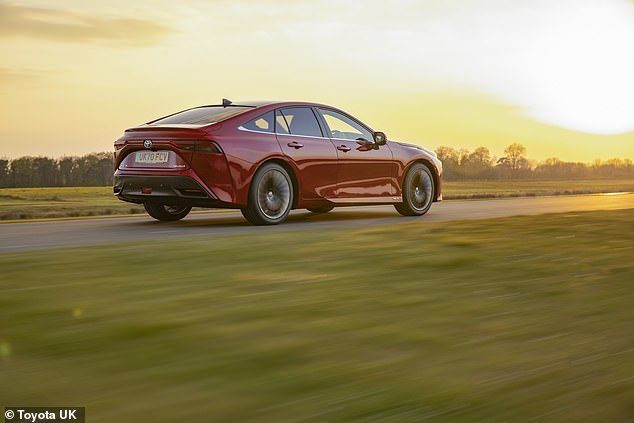 In terms of design, the Mirai looks cool in a restrained way without resorting to extreme sci-fi styling. ‘Its profile has something of the 1970s about it,’ says Ray 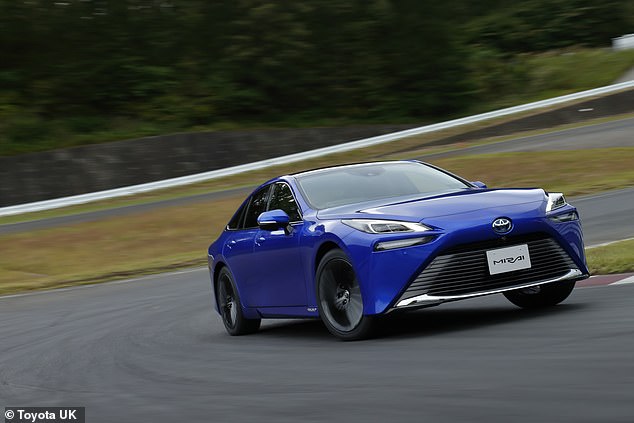 Acceleration from rest to 62mph officially takes 9 seconds, however it feels much faster out of the blocks from a standing start thanks to the instant torque from the electric motor 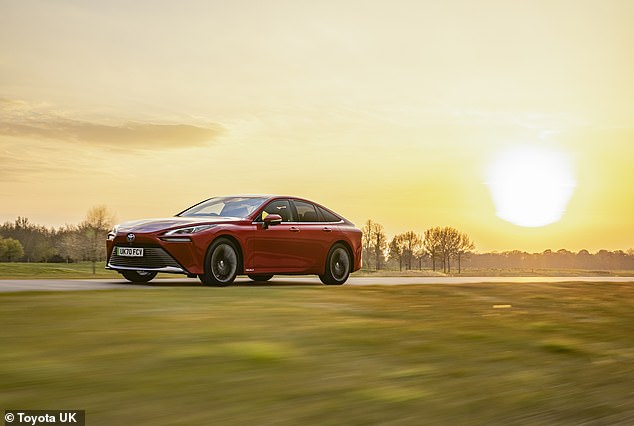 It’s nimble around roundabouts and is no slouch on dual-carriageways. It’s particularly feisty in sport mode and smooth in normal default mode

Despite its green credentials, I must confess to spending very little time in ‘Eco’ mode, though if you need it, it’s there. I felt I was already doing my bit using a zero-emissions fuel.

The whole car also feels quite taut and well put together. It’s also very quiet save for the occasional hint of a turbine-like whirl in the background.

It is so quiet in fact that Toyota has added some optional artificial noise to the new Mirai with a system called the ‘Active Sound Creator’. A little button on the driver’s seat side activates one of two sounds according to your performance.

The unique sound of the indicators struck me as unusual and may spook some of a nervous disposition. They had the rapid ‘tick tick tick’ of the archetypal time-bomb seen in countless thriller movies. And this in a car powered by hydrogen. 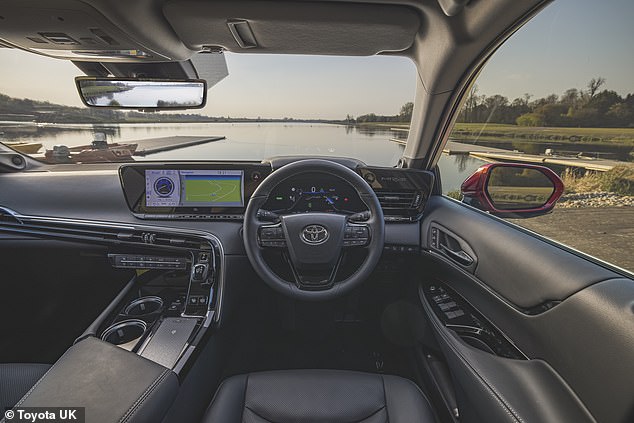 On the move, it is so quiet in the cabin that Toyota has added artificial noise to the new Mirai with a system called the ‘Active Sound Creator’ 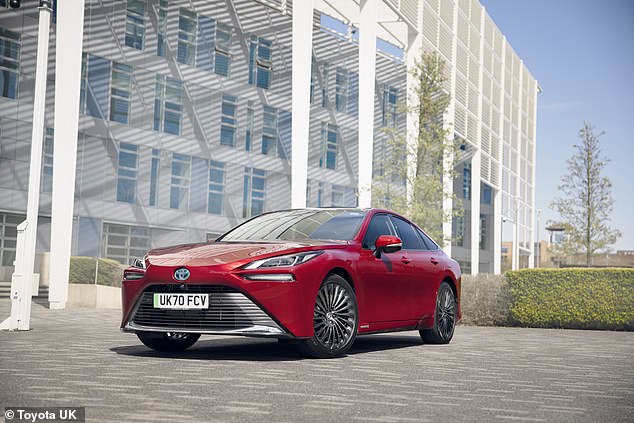 In terms of fuel economy, Toyota quotes a hydrogen fuel-tank capacity of 5.6kg of hydrogen used at a rate of 62 miles per 0.89kg of hydrogen, which costs between £10 and £15 per kilo. That makes the cost of a fill-up between £56 and £84 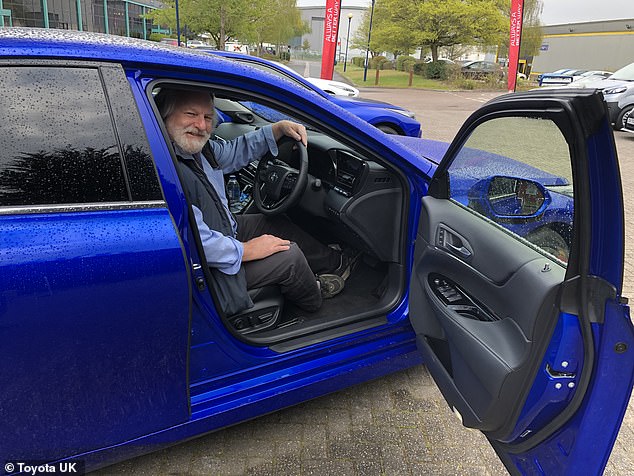 Concerned by indicators: Ray says the audible sound of the indicators is a rapid ‘tick tick tick’, which is similar to the archetypal time-bomb note heard in countless thriller movies. And this in a car powered by hydrogen

Will the indicator note might strike some concern, there should be no worries about range – the Mirai will travel 400 miles on a single tank, which will get you from London to Edinburgh.

In terms of fuel economy, Toyota quotes a hydrogen fuel-tank capacity of 5.6kg of hydrogen used at a rate of 62 miles per 0.89kg of hydrogen, which costs between £10 and £15 per kilo. That makes the cost of a fill-up between £56 and £84.

The Mirai is not cheap mind. My top of the range Mirai Design Premium Pack in a fetching ‘Force Blue’ – which makes it sound a bit like a police car – was priced at £64,995.

The Mirai range starts at a fraction under £50k at £49,995 for the entry level Mirai Design.

It also had a digital rear mirror – of the sort pioneered on Land Rovers. A rear camera sends a crystal-clear the image to a screen where the mirror usually resides. It’s good for unimpeded rear vision, but takes getting used to. If it starts to make you feel queasy, you can also flip it back to a conventional mirror. 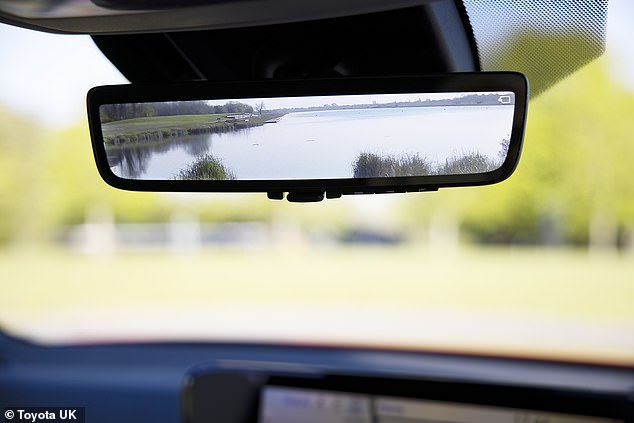 Mirai, signal, manoeuvre: The rear view mirror has the option to flip to a display of video footage to a crystal clear image 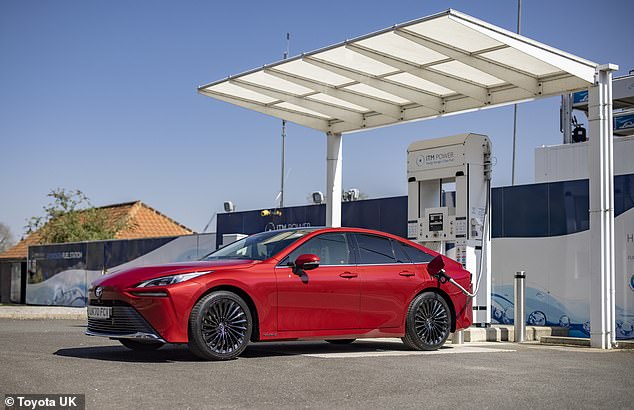 A five-minute refuel at a hydrogen filling station will take a drivers from London to Sheffield and back, says Toyota

How do you fill it up? 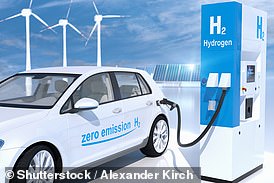 Instead, hydrogen stored in the high-pressure fuel tank is used in a chemical reaction called reverse electrolysis that takes place at a micro-thin membrane inside the fuel cell.

The membrane acts as a catalyst for a reaction between the hydrogen (H) fuel and oxygen (O) from the air. This generates electricity which drives the electric motors and charges the battery.

Explaining how people who drive the Mirai leave the air cleaner than it was before, Toyota said: ‘The Mirai breathes in a lot of air, which goes through a very high-performance air filter. So the air that goes out of the exhaust is a lot cleaner than what it is breathing in. This car isn’t producing CO2. But as it runs, it is also cleaning the atmosphere. It’s not just a zero-emissions car. We call it a minus-emission car.’

The electrically-charged filters remove pollutants including sulphur dioxide, nitrous oxides (NOx) and particulates. A special meter gauge measures how much clean air is being filtered by the car.

One car has already ‘cleaned’ a total 728,000 litres of air – equivalent to how much air 40 humans breathe each year. Toyota said: ‘The longer you drive, the more you clean the air.’

Then there’s the question of where you fill it up? The number of hydrogen filling stations is increasing, but they are still a relative rarity.

I have filled up the first generation Mirai at one of those hydrogen stations at Teddington.

You manoeuvre a super-sized nozzle (similar to a petrol pump but bigger) which clamps itself onto the fill-up link, and the pump injects the hydrogen at high speed and under pressure into the tank.

Just like filling up your car with four-star but, say the experts, arguably safer.

Despite fears about lighter than air but highly explosive hydrogen – which created lift for the ill-fated Hindenburg airship which exploded in flames – backers insist it is safer than petrol as it does not ‘pool’ when spilt.

UK firm ITM Power is creating a national network of hydrogen filling stations with those established already including Teddington, South West London, Cobham off the M25 in Surrey, Beaconsfield off the M40, Sheffield, Swindon, Slough, Gatwick (close to where I did my road test from Toyota’s workshop) , Birmingham, and Aberdeen.

A five-minute fill-up will take you from London to Sheffield and back, says Toyota.

The new Mirai has three hydrogen fuel tanks compared to two in the outgoing model – an increase of 20 per cent more storage capacity.

It also has a more compact and efficient hydrogen fuel cell set-up which boosts power to 128 kW (up from 114 kW.)

The smaller power unit also means Toyota engineers have been able to move it from the rear to the front, helping with styling, weight distribution and balance.

It also sits 65mm lower with a slightly longer wheelbase and a more dynamic stance. Weight distribution of the car from the front to rear axle is almost an even 50/50. 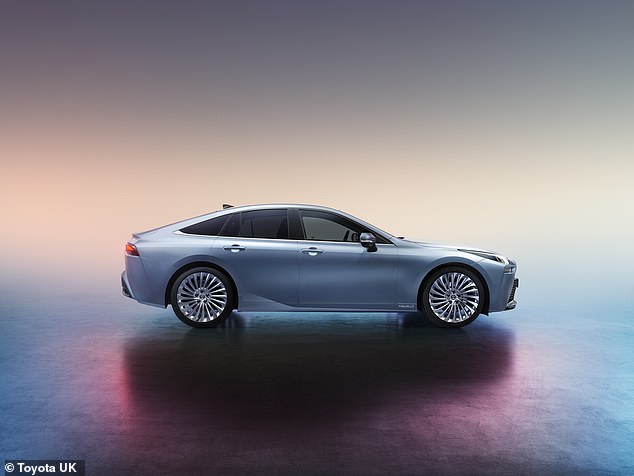 Would you buy one? Toyota hopes stylish new looks, improved performance, a 400-mile range and trimmed asking price will boost sales. Just 158 examples of the first-gen Mirai were registered in the UK between 2015 and 2020

Toyota hopes that sleek new looks, new platform chassis, a leaner and more efficient fuel-cell system, and increasing the range will help it achieve a ten-fold increase in Mirai sales – both globally and across Britain and Europe.

A price reduction will also help the cause, with the £66,000 asking price for the first-generation Mirai clearly far too steep for the majority of drivers.

While £50,000 is far from affordable, it does at least bring Toyota’s hydrogen fuel cell EV in line with more conventional battery electric cars, like the Tesla Model 3 Long Range, which has a claimed 360-mile range and costs £48,490 in the UK.

A ten-fold increase in Mirai sales would boost global deliveries from around 3,000 to 30,000 a year. Total sales in Europe, since launch five years ago are around 800, of which just 158 were sold in the UK.

Other hydrogen fuel-cell cars include Hyundai’s Nexo and Honda’s Clarity.

British-start up Riversimple uses hydrogen power which is also being explored by BMW and Daimler.

Will it fit in my garage? Toyota Mirai – second generation