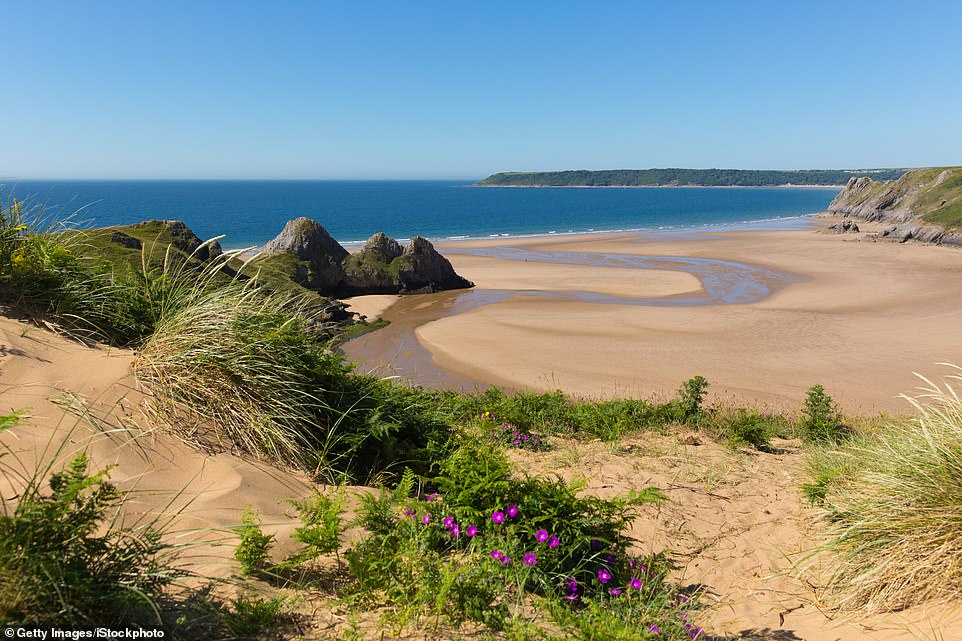 The beaches of Gower peninsula have been voted among the world’s best and its countryside is so breathtaking that it was the first area in the UK to be officially judged an Area of Outstanding Natural Beauty.

It’s one of the wonders of Wales, alongside Snowdon and the ancient yew trees of Overton-on-Dee, with more than 30 beaches, hundreds of miles of scenic footpaths and a seemingly endless supply of great places to eat, drink, relax and stay.

The whole area is no bigger than the Isle of Wight, but its four key quarters all pack a hefty staycation punch. Here’s the best of what they have to offer.

The town with fantastic taste

Wild and wonderful: The stunning Three Cliffs Bay, described by Welsh mezzo-soprano Katherine Jenkins, who grew up just a few miles away, as one of the most beautiful places in the world

Even the motorway offers amazing views as you head into the Gower – the stretch of M4 that rounds the headland near Bridgend offers a striking panorama of Swansea Bay. Switch to the slower coast road as you approach Swansea and you’ll find a thoroughly revitalised seaside city showing the results of its recent £1 billion redevelopment.

From Monday to Saturday, you can browse more than 100 stalls in Swansea Market for cheeses, local chocolates and everything from vintage clothes to scented candles. Then explore the new Maritime Quarter, stuffed with places to eat, and plenty of free galleries and museums. A top choice is the National Waterfront Museum, which is full of quirky industrial relics and stories of the sea.

To the west of the bay is the increasingly trendy town of Mumbles, where independent craft shops and cafes cluster on a tree-lined coastal promenade. Bars and bistros abound, plus a mix of surf shops and designer boutiques that means there’s almost certainly something for everybody. 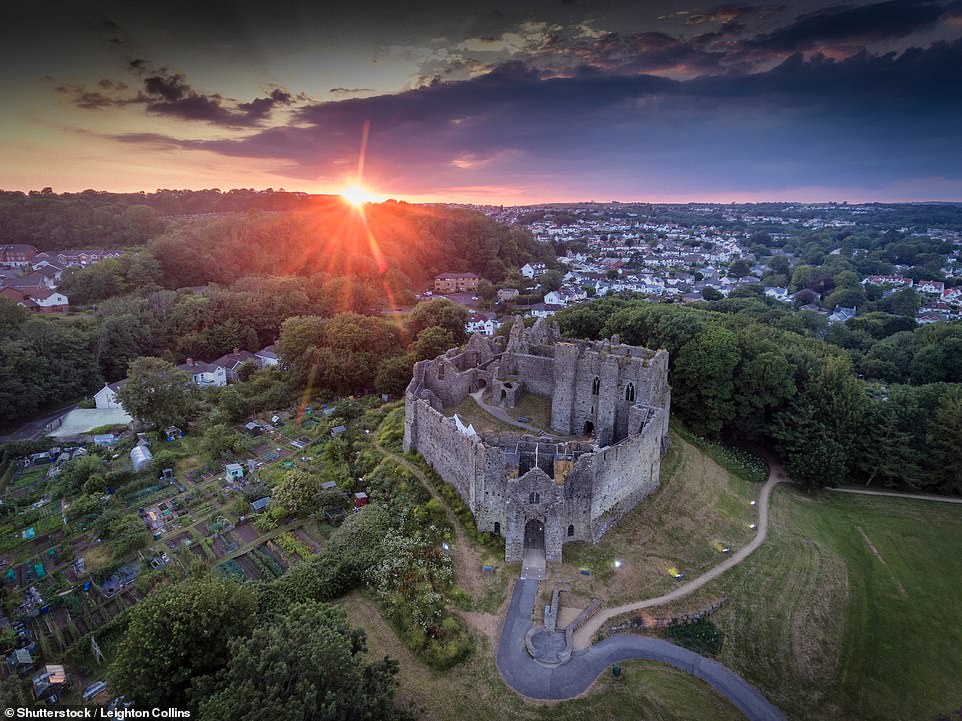 Imposing: The ruins of 12th Century Oystermouth Castle, overlooking the town of Mumbles

The 12th Century ruins of Oystermouth Castle, set on a grassy mound and cleverly lit at night, will fire up children’s imaginations. Kids also love Mumbles’ many ice cream parlours. Choose a flavour then stroll along the Victorian pier at sunset before heading back to dry land for dinner.

The town’s booming food scene helps explain why it’s been voted one of the best places in Wales to live. For an al fresco treat of fresh-off-the-boat seafood, try The Seafood Hut in Southend Gardens. Crispy chilli prawns or dressed crab with fried potatoes and aioli taste all the better while perched on the promenade wall watching the boats go by.

If you want to stay a while then head to Langland Cove, a B&B where guests will find cake and jugs of fresh milk in the rooms. Big breakfasts are a speciality as well. Double B&B rooms from £90 a night (langlandcove.co.uk). 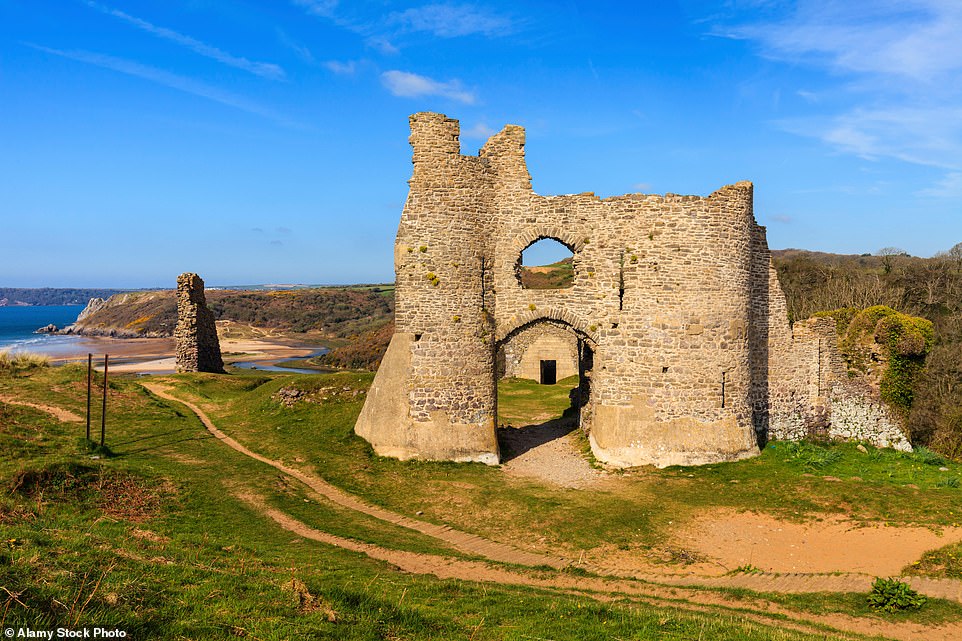 Historic path: Walking trails fan out from the Heritage Centre and pass through ancient woods and past the ruins of Pennard Castle (pictured above) to the coast

Leave Mumbles behind and follow twisting coastal lanes around the headland to the west. You’ll be passing plenty of sheltered sandy coves and feeling envious of the homeowners’ endless views.

If you’re a hiker, you’ll be tempted away from the clifftop walks to some seemingly secret coves for a quick dip and a picnic. A great spot is Caswell Bay, framed in a perfect wooded bowl of cliffs. Alternatively, head to lesser-known coves such as Limeslade, a rocky inlet overlooked by an old Forte’s ice cream parlour. It’s been a favourite since 1926 – the watermelon ice cream is highly recommended.

A little further along the coast is Three Cliffs Bay, described by Welsh mezzo-soprano Katherine Jenkins, who grew up just a few miles away, as one of the most beautiful places in the world. It’s also one of the most photogenic, so it’s a perfect pitstop for photographers and painters.

Another Gower institution is the long-established Pennard Stores, serving coffee, gourmet sandwiches and local delicacies such as seaweed caviar, though parking can be tricky as you may have to dodge the cows that graze around the adjacent roundabout (threecliffs.co.uk). 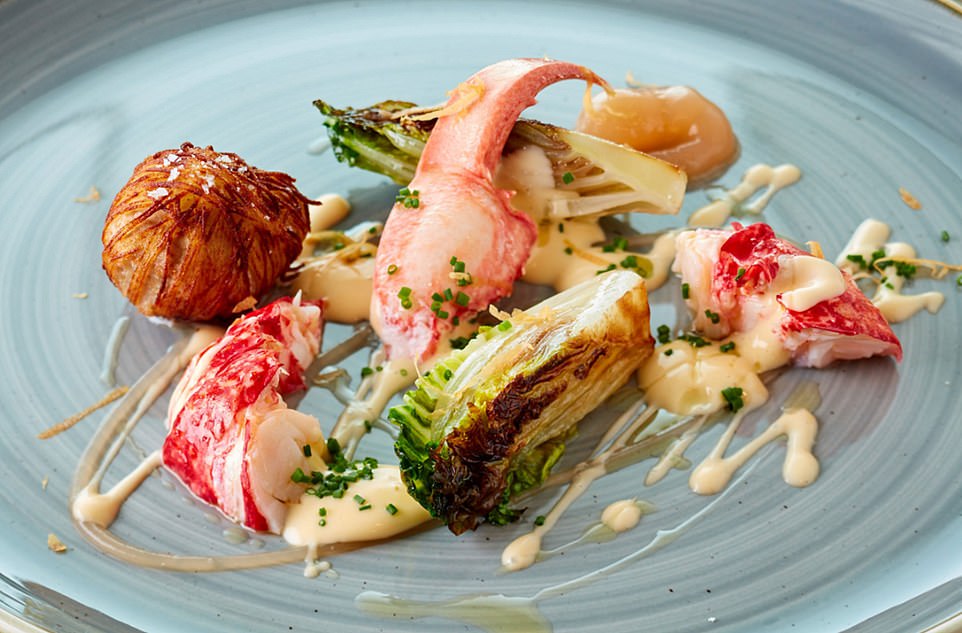 Drive across the river ford at Parkmill to the happily ramshackle collection of huts called the Gower Heritage Centre (gowerheritagecentre.co.uk). Check out handmade jewellery and ancient cockle-fishing artefacts before stocking up on picnic ingredients from the wonderful Little Valley Bakery. A top tip from locals is to try its raspberry and pistachio morning buns (littlevalleybakery.com).

Walking trails fan out from the Heritage Centre and pass through ancient woods and past the ruins of Pennard Castle to the coast.

The footpaths are part of some 268 miles of marked Gower trails, including 40 miles of coastal paths, and there are plenty of free maps on the downloads section at visitswanseabay.com.

Find more beautiful beaches and fabulous food at Oxwich Bay, an award-winning 2½-mile-long crescent of sand which is home to the Beach House, a stunning Michelin-starred seafood restaurant run by TV chef Hywel Griffith. Tempting dishes include Oxwich lobster with the Welsh delicacy laverbread, or line-caught mackerel with nasturtium and fennel. All can be eaten on the terrace looking out to sea. Lunch is from £32 (beachhouseoxwich.co.uk).

At the Oxwich Bay Hotel, you can sleep in stylish private cabins at the edge of the bay thanks to its new Secret Garden pods. B&B in a double room costs from £84 a night (oxwichbayhotel.co.uk). 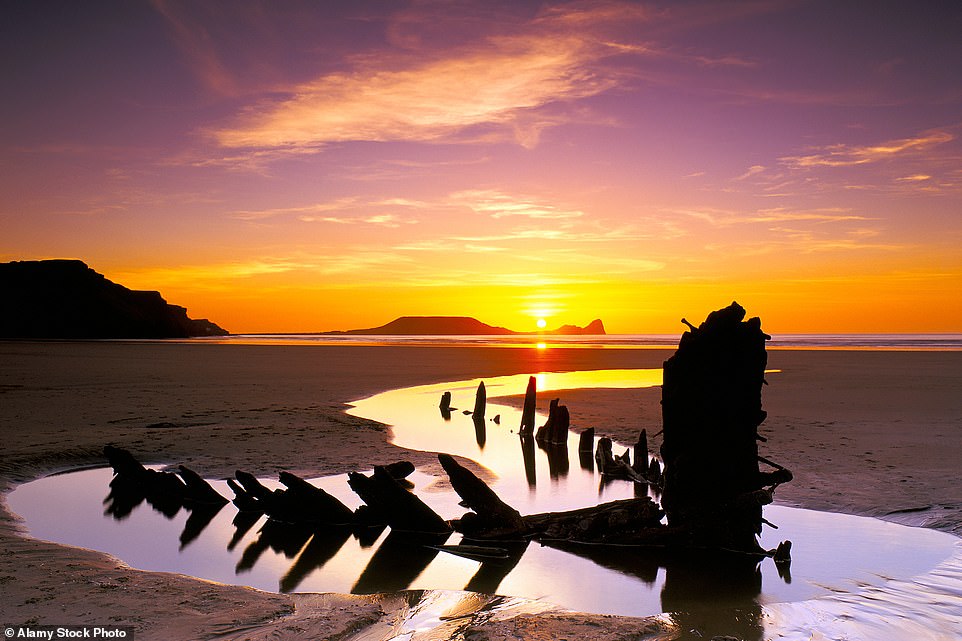 World-class: On the far western point of Gower is the wild, Atlantic-facing, surf beach of Rhossili

Drive on to the village of Port Eynon to paddle or swim at its sandy Blue Flag beach. Then tuck in to fish and chips at The Seafarer beach cafe, which are often judged the best on Gower. They’re cooked to order, so while you wait you can go back in time by reading old newspaper articles on the wall.

You’re in smugglers’ country here, and there are rumours that the mysterious Culver Hole Cave at the west end of the bay was once a secret store for contraband.

Today, many of Gower’s old farm buildings have been reinvented as stylish holiday accommodation. One of the best is Slade Barn, just outside Port Eynon. The 300-year-old lime-washed sheds are just a short stroll from the beach and can sleep six from £550 a week (sladebarngower.co.uk).

On the far western point of Gower is the wild, Atlantic-facing, surf beach of Rhossili. Its photogenic three miles of sand make it another frequent contender when glossy magazines list the top beaches in the world. 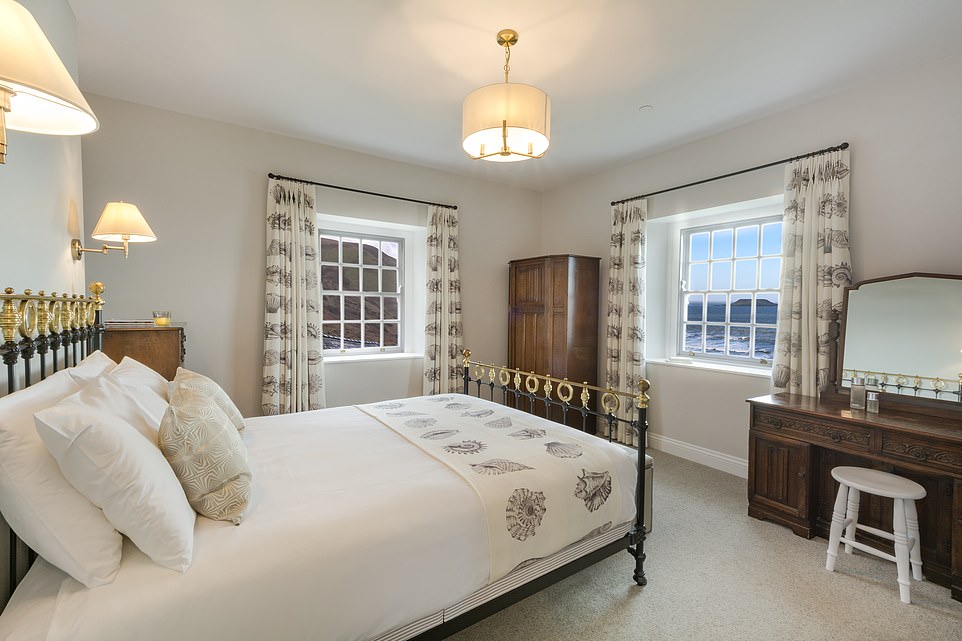 The Old Rectory attracts plenty of visitors, having found fame in the BBC’s Torchwood series. Pictured is one of the rooms

The best spot to appreciate the world-class landscape is from the cliff paths above The Old Rectory, now a National Trust property. It’s easy to find as this remote 200-year-old cottage is the only building along the beach.

It attracts plenty of visitors, having found fame in the BBC’s Torchwood series. It’s set to be another spectacular place to stay, having been newly renovated to sleep up to seven. Get details of rates and availability at nationaltrust.org.uk.

If you feel like an adventure, stride out to the gloriously named Worms Head islands – but take care, as they can be reached only at the two hours either side of low tide. Look for exposed shipwrecks as you cross the causeway. Free phone apps provide tide times, but with sporadic signal coverage here it’s best to check in advance.

Walks on land can be a joy as well. Every year, National Trust volunteers sow some 400,000 sunflowers in nearby fields, or you can tackle the slopes of The Beacon, Gower’s highest point, which turn orange with bracken in the autumn.

Down the hill, post-walk refreshments can be found at the laid-back Bay Bistro beach cafe. Highlights are sourdough bruschetta and avocado on toast. If it’s breezy outside, they also sell a range of locally woven wool blankets. 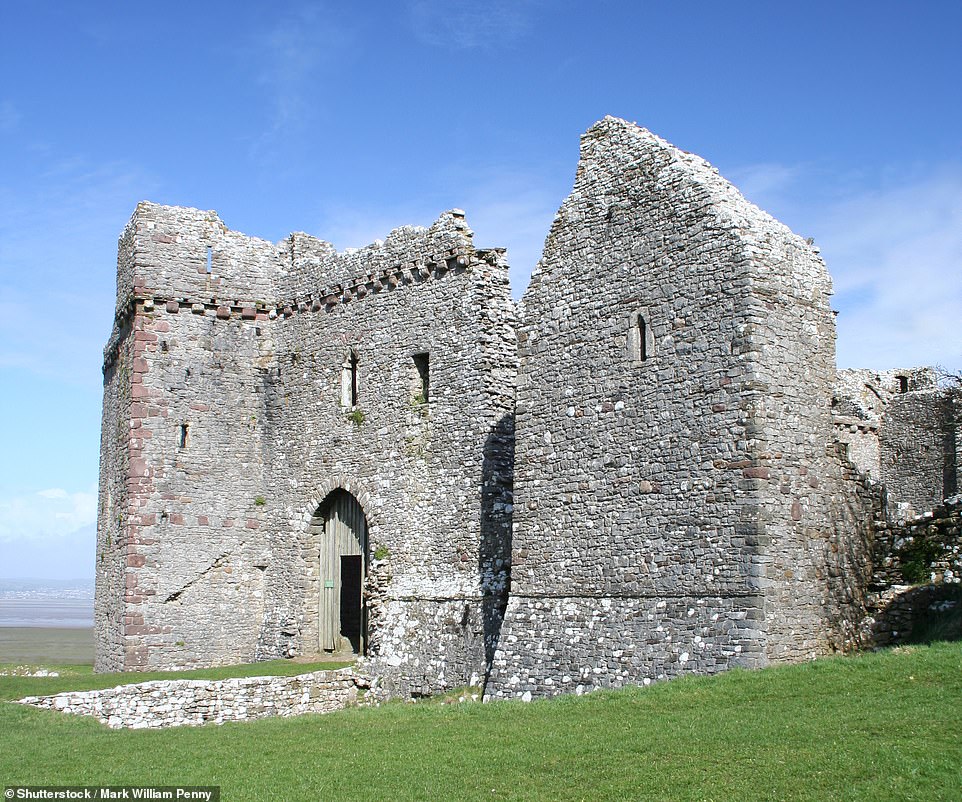 The ruins of Weobley Castle are worth touring. They sit on a ridge from where you can watch wild horses graze on marshland below

The atmosphere changes in Upper Gower, where you’ll find a mix of misty salt marshes and sunny, sheltered fields that are perfect for romantic picnics and al fresco family feasts. The ruins of Weobley Castle are worth touring. They sit on a ridge from where you can watch wild horses graze on marshland below. Buy entry tickets at a cream-painted farmhouse that also sells cuts of prime Welsh lamb.

One of the area’s best walking, cycling or driving routes is the long meandering lane across the marshes from Llanrhidian, though you need to pay attention to the warning signs about tidal flood risks. While checking for incoming waves, spot swathes of unfamiliar wildflowers, cute Shetland ponies and hazy views across the Loughor estuary to Carmarthen.

The other big hazards in northern Gower’s quiet countryside are the sheep that often sleep in sunny roads. Take extra care on the narrow, winding lanes that lead to the geranium-bedecked Britannia Inn in Llanmadoc. The pub serves steak and ale pies and perfect salt marsh lamb and mash. It also has a takeaway service, if you’re staying nearby (britanniagower.com).

More hedges of honeysuckle and blackberries lead to Llanmadoc’s tiny crenellated church. Take a while to wander round the pretty churchyard in search of 1,500-year-old Celtic crosses and other relics.

Some of the best walks and views are on Cefn Bryn, right in the heart of the peninsula – a rugged, five-mile-long finger of moorland.

The King Arthur Hotel, a classic, whitewashed country inn, stands amid the moor and serves diners on tables on the village green outside. Tuck in there and your neighbours may be grazing sheep from nearby farms. B&B in neat, modern rooms above the bar cost from £90 a night, and smart new self-catering cottages next door cost from £525 a week (kingarthurhotel.co.uk).

For a finale to a Gower staycation, it’s hard to beat a clifftop horse ride. Clyne Farm Centre now offers nine holiday cottages and a catalogue of outdoor activities, including surf lessons and very muddy assault courses in the nearby forest. Pick of the accommodation is a Victorian gamekeeper’s cottage from £855 a week (clynefarm.com).

This is also where Edward VII took tea on the lawn after a day hunting deer. He obviously had a good eye for a perfect staycation spot.