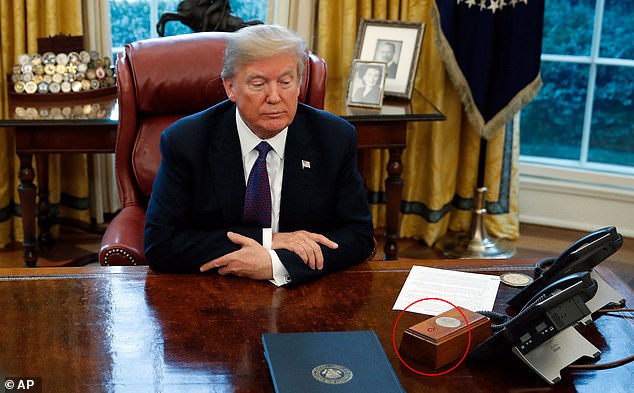 A button Donald Trump used to order Diet Cokes on command while working in the Oval Office has reportedly been removed by President Joe Biden as one of a number of sweeping changes in DC over the last 24 hours.

The infamous device, which had been installed at the Resolute Desk, wasn’t visible in photos captured of Biden working inside the White House on Thursday.

Trump, a known soda fanatic, reportedly drank up to 12 cans of Diet Coke per day during his time as commander-in-chief.

He first unveiled the button during an interview with the Associated Press in 2017, showing reporters that with one push, a White House butler would immediately bring him a glass of soda on a silver tray.

However, the notorious Coke-summoning device now seems to have been ousted from the White House, along with Trump himself, amid a new dawn on Capitol Hill.

Now you see it: The infamous Diet Coke-summoning device is seen next to Trump’s phone and is encased by a wooden box 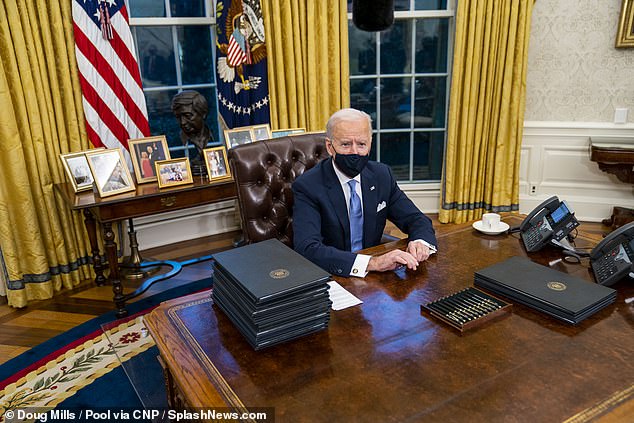 Now you don’t: The button wasn’t visible in photos captured as Biden worked Thursday inside the White House and appears to have been removed

The button’s absence was first pointed out in a Thursday tweet by Times Radio chief political correspondent Tom Newton Dunn, who shared images comparing the desks of Trump and Biden.

‘President Biden has removed the Diet Coke button,’ Dunn wrote. ‘When … I interviewed Donald Trump in 2019, we became fascinated by what that little red button did. Eventually Trump pressed it, and a butler swiftly brought in a Diet Coke on a silver platter. It’s gone now.’

Instead, photos of Biden’s desk during his first day in office show two phones, a coffee cup, and a set of pens. It’s unclear what has happened to the call button.

Ex-White House aide Chris Sims revealed in his 2019 book Team of Vipers that Trump would often use the red button as a way of pranking visitors to the White House by suggesting it had nuclear capabilities.

‘Out of nowhere, he’d suddenly press the button,’ Sims wrote. ‘Not sure what to do, guests would look at one another with raised eyebrows.’

Trump would then reportedly ‘burst out laughing’ when the butler would walk in the room. 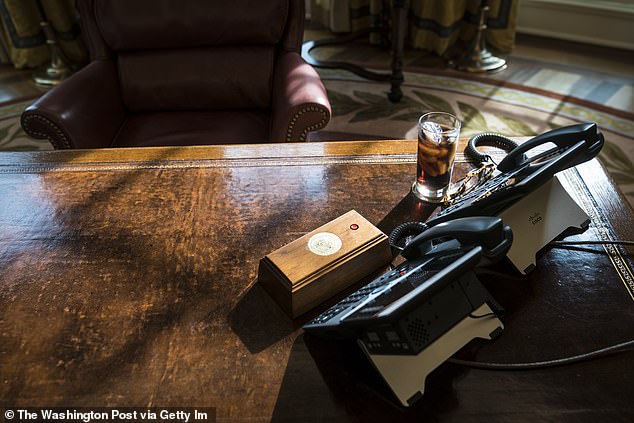 Trump, a known soda fanatic, reportedly drank up to 12 cans of Diet Coke per day during his time as commander-in-chief

News of the button’s existence and subsequent removal spread across social media across Thursday, inspiring the typical flurry of memes and amusing commentary.

‘This is not the change we voted for,’ Robert Evans tweeted in jest. ‘If you elect me president in 2024, there will be a Diet Coke button in every home, and butler’s will show up every hour on the hour to force Diet Cokes into your hand whether you want one or not. I will drown this nation in aspartame.’

Will Menaker said: ‘Biden getting rid of the Diet Coke button in the oval office shows that he has zero interest in “reaching out” or “healing division”.’

‘Would like to go on record as pro diet coke button,’ Charlie Warzel added.

Tweeter William Ader wrote: ‘Overheard at Mar-a-Lago this morning: Get your own damn Diet Coke.’

While Biden may not share his predecessor’s passion for soft drinks, he does have his own sugary vice: ice cream.

In August, during a video released as part of the Democratic National Convention, Biden’s grandchildren revealed that he is ‘always eating ice cream, usually vanilla’. 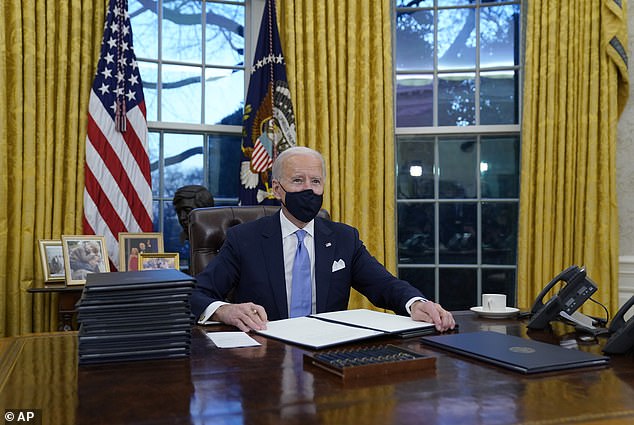 While Biden may not share his predecessor’s passion for soft drinks, he does have his own sugary vice: ice cream 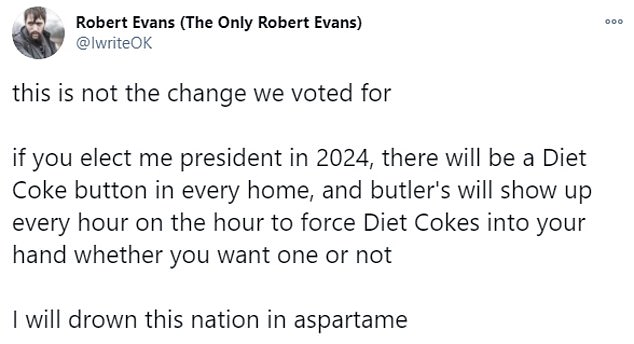 As further proof, on Thursday, the day after his inauguration, an ice cream brand that Biden has a particular affinity for, Jeni’s Splendid Ice Creams, launched a new flavor in his honor.

The company said Biden has been a frequent visitor to their stores since 2012 – so much so that founder Jen Britton Bauer knows his go-to order by heart: a double scoop of chocolate chip ice cream on a waffle cone.

While the fate of the button remains unknown, it’s not the only change Biden has made to Oval Office’s decor.

The 46th US President has placed a photograph of his late son, Beau Biden, on a table behind the Resolute Desk. Beau died from brain cancer in 2015 at the age of 46.